Magnetic levitation, maglev, or magnetic suspension is a method by which an object is suspended with no support other than magnetic fields. Magnetic pressure is used to counteract the effects of the gravitational and any other accelerations.

Magnetic levitation, maglev, or magnetic suspension is a method by which an object is suspended with no support other than magnetic fields. Magnetic pressure is used to counteract the effects of the gravitational and any other accelerations.

Earnshaw's theorem proves that using only static ferromagnetism it is impossible to stably levitate against gravity, but servomechanisms, the use of diamagnetic materials,superconduction, or systems involving eddy currents permit this to occur.

In some cases the lifting force is provided by magnetic support levitation, but there is a mechanical   bearing little load that provides stability. This is termed pseudo-levitation.

With a small amount of mechanical constraint for stability, pseudo-levitation is relatively straightforwardly achieved.

If two magnets are mechanically constrained along a single vertical axis, for example, and arranged to repel each other strongly, this will act to levitate one of the magnets above the other.

Another geometry is where the magnets are attracted, but constrained from touching by a tensile member, such as a string or cable.

Another example is the Zippe-type centrifuge where a cylinder is suspended under an attractive magnet, and stabilized by a needle bearing from below.

Diamagnetism is the property of an object which causes it to create a magnetic field in opposition to an externally applied magnetic field, thus causing a repulsive effect. Specifically, an external magnetic field alters the orbital velocity of electrons around their nuclei, thus changing the magnetic dipole moment. According to Lenz's law, this opposes the external field.Diamagnets are materials with a magnetic permeability less than μ0 (a relative permeability less than 1). Consequently, diamagnetism is a form of magnetism that is only exhibited by a substance in the presence of an externally applied magnetic field. It is generally quite a weak effect in most materials, although superconductors exhibit a strong effect. Diamagnetic materials cause lines of magnetic flux to curve away from the material, and superconductors can exclude them completely (except for a very thin layer at the surface).

Earnshaw’s theorem does not apply to diamagnets. These behave in the opposite manner to normal magnets owing to their relative permeability of μr < 1 (i.e. negative magnetic susceptibility).

Diamagnetic levitation can be used to levitate very light pieces of pyrolytic graphite or bismuth above a moderately strong permanent magnet. As water is predominantly diamagnetic, this technique has been used to levitate water droplets and even live animals, such as a grasshopper, frog and a mouse. However, the magnetic fields required for this are very high, typically in the range of 16 teslas, and therefore create significant problems if ferromagnetic materials are nearby.

The modern trend is towards the use of d.c motors (both separately excited and d.c series motors) equipped with thyristor control. The operating voltages are 600V or 1,000V. Braking employed are mechanical, rheostatic and regenerative, Thyristorised converters provide accurate control and fast response. Main advantages of thyristor control are the absence of bulky on load tap changer and electromagnetic devices, saving of energy, notch less control, increase in pulling ability of the motive power, and minimum wear and tear because of absence of conventional moving parts in the motor control circuits. 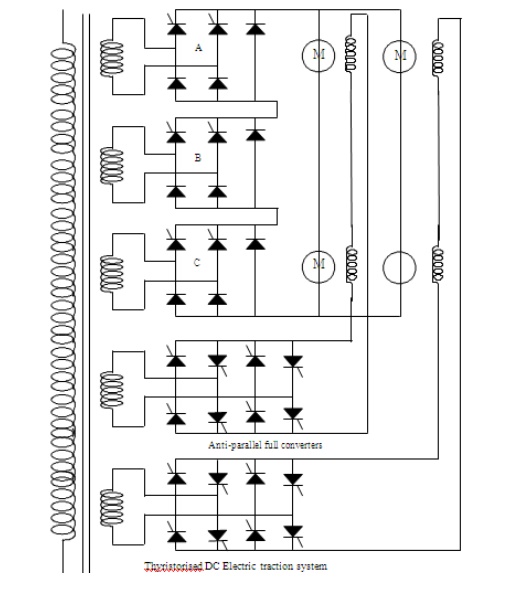 In electric traction, it is desirable that the train accelerates and decelerates at a constant rate for the comfort of the passengers. Using thyristors, this objective can be met in the following way:

When the speed goes down during breaking the generator voltage decreases. For a particular braking torque a particular armature current is required. This is achieved by increasing the field excitation to a relatively high value. If, however, the generator voltage exceeds the supply voltage, in dynamic braking, this increase is permissible as the armature is not connected to the supply and the energy of the generator can be dissipated in the braking resistors, external resistances in series with the armature are connected in case of regenerative braking to absorb the voltage difference between the armature voltage and supply voltage. With this, of course, part of the generated power is wasted in the external resistors and the efficiency of the overall system is decreased.

Various methods of speed control and electric braking employing thyristors have already been studied in power electronic subjects. In addition to ordinary phase control methods, cycle selection methods of control of SCR for varying the voltage applied to the traction motors are also employed. In this method the required average voltage is obtained by accepting or rejecting a certain numbers of complete half cycles. In practice, at the start only one half out of eight is accepted and as the speed builds up, it is gradually raised to 2/8, 3/8 and finally 8/18 for full power operation. This method is advantageous due to low frequency harmonics, low rate of rise of current, better power factor etc.

In chopper control of traction motors, at start, the ‘on’ period of pulse is kept very short which lengthens during the period of controlled acceleration. Thus the average voltage applied across the traction motors is gradually increased keeping the mean value of the input current close to the desired value.Fig. shows a typical thyritorised dc traction system supplying a group of four separately excited motors. The armatures are supplied from half controlled bridge converters. However, it is desirable to feed the field windings through fully controlled bridge converters so as to reduce the ripple in the field current. Low ripple in the field current ensures low iron losses in the machines. However, if regenerative braking is required then the armature should be supplied from fully controlled bridges. Freewheeling diodes are connected as illustrated to ensure good waveform of armature current. The armatures are connected in series – parallel arrangement to ensure good starting and running characteristics. It is seen that armatures are supplied by three bridges connected in series. For starting first only bridge A is triggered and firing angle is advanced as speed builds up. When bridge A is fully conducting (i.e. when α=0), bridge B is triggered and then bridge C is triggered. During starting field currents are set to maximum to provide high starting torque. The use of three bridges ensures better power factor than would be possible with a single bridge.