Home | | Electric Energy Generation, Utilization and Conservation | AC and DC Supply Systems in Electric Traction or System of Track
Posted On :  19.05.2017 11:17 am

Ac single phase system: In this supply is taken from a single overhead conductor with the running rails.

The switching equipment may be mechanically operated tapping switch or remote controlled contractor of group switches. The switching connections are arranged in two groups usually connected to the ends of a double choke coil which lies between the collections to adjacent tapping points on the transformer. Thus the coil acts as a preventive coil to enable tapping change to be made without short circuiting sections of the transformer winding and without the necessity of opening the main circuit. 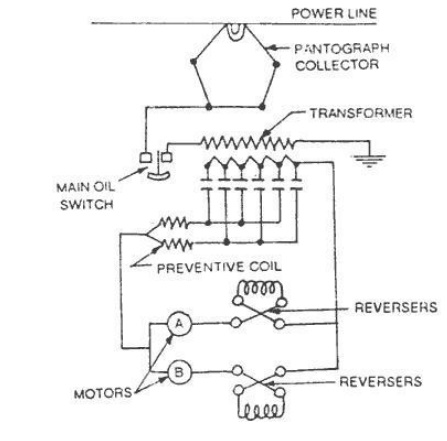 The transformation and high voltage generation of dc is very inconvenient to the dc supply used is at normally 600 V and this voltage is almost universal for use in urban and suburban railways.

For direct current equipment, the series motor is universally employed as its speed-torque characteristics are best suited to traction requirements. Generally two or more motors are used in single equipment and these are coupled in series or in parallel to give the different runningspeeds required. The motors are initially connected in series with starting rheostats across the contact line and rails, the rheostats are then cut out in steps, keeping roughly constant current until the motors are running in full series. After this the motors are rearranged in parallel, again with rheostats, the rheostats are cut out in steps, leaving the motors in full parallel. The power input remains approximately constant during the series notching, then jumps to twice this value during the parallel notching. Thus a 4 motor unit will have three economical speeds when the motors are running in series, series - parallel connections. The rheostats are operated electro magnetically or electro-pneumatically.