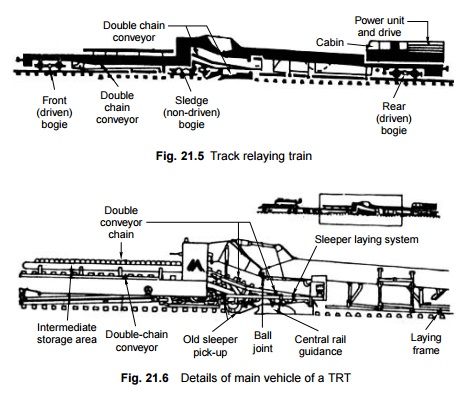 Indian Railways has recently purchased two track renewal trains (TRTs) (Fig. 21.5) of modern design, which can carry out track re-laying work automatically with minimum manual effort. These trains are of the P-811 model and are manufactured by the Tamper Corporation of the USA. The cost of a TRT along with all ancillary units is about Rs 100 million.

A track relaying train is designed to simultaneously and continuously perform all the operations involved in the replacement of rails and sleepers. The train carries out multifarious functions such as removal of old rails, removal and stacking of old sleepers, levelling and compacting of the ballast bed, placing new sleepers in their proper positions, laying of new rails, and removal of released rails.

The train consists of three main units, which are described in the subsequent paragraph.

The main vehicle weighs about 110 t and has an overall length of about 45 m. It further comprises of the following parts.

(a)  A sleeper handling device which removes the old sleepers and replaces them with new ones with the help of several conveyors.

(b) A power vehicle fitted with a rail lifting and guidance system for dissecting the old rails at the side of the track.

(c)  A triangular smoothing plough and a compaction plate to prepare the ballast for new sleepers.

The train has a handling gantry for transporting old and new sleepers. The gantry weighs about 6.6 t and has a lifting force of about 50 kN. It can lift about 20 concrete sleepers at a time and travel at a maximum speed of 15 km/h.

A set of BFRs

These are used for the storage of old and new sleepers. They are fitted with an interconnecting rail track on which the handling gantry runs. The renewal can be coupled with a normal train and can reach a speed of up to 100 km/h. The train can, however, move independently with the help of a hydraulic drive and can achieve a maximum speed of 720 m/h when in use.

The following steps are involved in the working of track relaying trains.

Removal of fastenings The fastenings joining the old rails to the sleepers are removed ahead of the commencement track renewal work.

Placement of new rails The duly welded rails are placed in advance either beside the track duly welded or fish plated, at a distance of 1.5 m from the track.

Positioning on the track The main vehicle is now positioned on the track to be renewed. The design of the machine is such that with the help of a guidance sled it is possible to acquire an accurate reproduction of the old track layout without the aid of an external guidance system.

Lifting of old rails The old rails, which are already free from their fastenings, are lifted with the help of the rail lifting and guidance frame. The machine continuously lifts the old rails and deposits them on either side of the track. The ballast can be simultaneously screened if necessary, while the rails are resting on the ends of the sleepers.

Picking up of old sleepers The old sleepers are picked up with the help of a sleeper pick-up system and placed upright on the conveyor system.

Laying of new rails The new rails, which are already laid along the track, are then lifted and placed in their appropriate positions on the sleepers. The equipment is so designed as to cause minimum stress in the rails being lifted.

Picking up of old rails The final operation is the removal of old rails. It is imperative that prior to rail pick up, the rails are cut into lengths of 39 m to ensure that they are handled properly. The wagons, which are towed by a utility vehicle (UTV), contain a mobile crane that picks up the old rails and places them into the wagons for transportation to the depot.