The need for rail renewal can be felt because of any one of the following reasons. (a) Incidences of rail fractures or failures (b) Wear of rails (c) Maintaining tracks at the prescribed standards (d) Shortened service life of rails (e) Plan-based renewal

The need for rail renewal can be felt because of any one of the following reasons.

(a)  Incidences of rail fractures or failures

(b) Wear of rails

These criteria are discussed in detail in the subsequent sections.

1 Incidences of Rail Fractures or Failures

Since this factor has a direct and vital bearing on the safety of the track, it should take precedence over all other factors when deciding on the rail renewals to be carried out. A spate of rail fractures or failures on a particular length of a track may necessitate rail renewal. In such cases, an ultrasonic test of the rails should be carried out, the results scrutinized, and the section is considered for rail renewal only if the rail fractures are high for a particular season (4% in a year or 10% overall).

Rail renewals may also become necessary because of excessive wear. This wear can be of various types as a result of the following.

Rail renewal is called for when the loss in the weight of the section exceeds the prescribed limits given in Table 21.1. In such cases, the rails should be tested frequently using ultrasonic rail flaw detectors because such rails are more prone to rail failures.

Wear due to corrosion

Rails get corroded due to the vagaries of weather, atmospheric conditions, and chemical reactions that take place when certain materials come in contact with rail metal, thereby resulting in wear. Such wear is more prominent in coastal areas. Corrosion beyond 1.5 mm in the web and the foot of the rail is specified as the criterion for rail renewal due to corrosion.

When vertical wear (Fig. 21.1) causes a reduction in the depth of the rail head until a point beyond which there is a risk of the wheel flanges grazing the fish plates, the rails should be renewed. The limits of vertical wear for the different rail sections are given in Table 21.2. 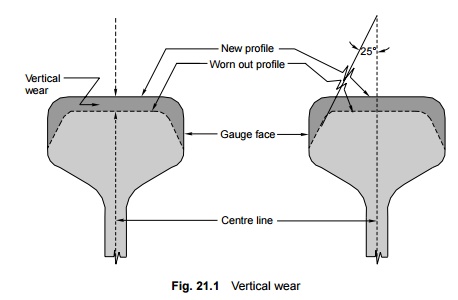 Lateral wear (Fig. 21.2) is measured at a distance of 13 to 15 mm below the rail top table. The profile of the worn out rail is recorded and superimposed over a new profile to determine lateral wear. Excessive lateral wear causes lateral hunting of vehicles, resulting in an uncomfortable ride. This condition will manifest itself in the form of high values of the ride index during oscillograph car runs. When it becomes uneconomical to maintain such a track, through rail renewal becomes crucial. The permissible limits of lateral wear under various conditions on the Railways are presented in Table 21.3. 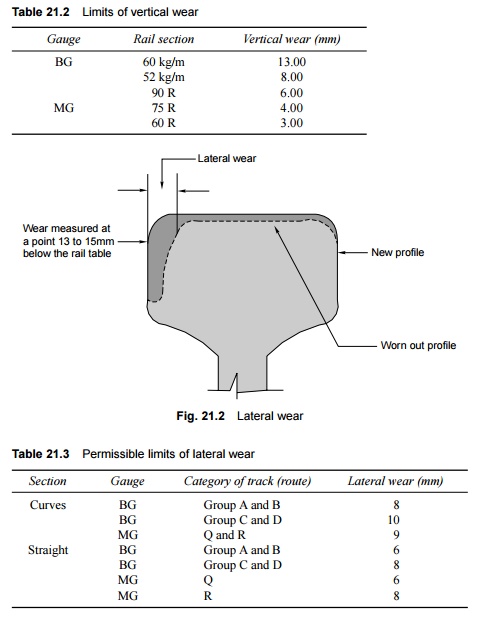 3 Maintaining Tracks at the Prescribed Standards

There may be situations in which renewals become necessary even though the service life of a rail has not yet expired, due to local factors such as curves, steep gradients, high speeds, heavy axle loads, burrs, scabbing, and wear of rails that have the following adverse effects on the track.

(a)  Poor running quality of track in spite of the extra maintenance labour engaged on the section.

(b) Disproportionate cost of maintaining the track under safe conditions.

(c)  Poor condition of the rail due to hogging, battering, scabbing, wheel burn, etc. and other causes such as the excessive corrugation of the rail and which make track maintenance difficult and uneconomical and affect riding quality.

Due to the passage of moving loads, alternating stresses are created in the rail section. The number of reversals in the stresses are directed to the weight in gross million tonnes (GMT) borne by the rails. The majority of rail fractures originate from fatigue cracks, which develop after a rail has borne the threshold GMT approved for it, as given in Table 21.4.

Table 21.4   Appearance of cracks in rails as related to GMT

Plan-based renewals are planned with the objective of modernizing the track structure on selected routes in the quickest possible time. It may sometimes involve a premature renewal of the track also.