A concrete sleeper weighs more than 200 kg and, therefore, unlike wooden or metal sleepers, cannot be handled easily by manual labour.

A concrete sleeper weighs more than 200 kg and, therefore, unlike wooden or metal sleepers, cannot be handled easily by manual labour. Apart from being heavy, a concrete sleeper is brittle in nature and is likely to get damaged if dropped from some height or handled roughly. Furthermore, the conventional method of re-laying, which employs manual labour, is quite slow and the quality of the work done is also not very good.

The need for mechanized re-laying has been increasingly felt on account of these limitations, particularly in view of the large-scale use of concrete sleepers on Indian Railways.

Mechanical re-laying can be done by either one of the following methods.

(a)  Semi-mechanized re-laying using prefabricated panels, in which the main work of re-laying is done mechanically with the help of PQRS (Plesser quick relaying system) equipment but all other minor works are done manually.

(b) Fully mechanized re-laying with the help of track re-laying trains.

On Indian Railways, mechanical re-laying is mostly done with the help of PQRS equipment. This equipment is manufactured by an Austrian firm Messrs Plasser and Theurer in a factory near Faridabad, India. The equipment basically consists of two self-propelled portal cranes, each capable of lifting 5 to 9 t. The portal cranes run on an auxiliary track with a 3.4-m gauge. Track panels consisting of concrete sleepers, rails, and fittings are prefabricated in the base workshop and used for re-laying the track. These prefabricated panels are loaded in special BFR-type wagons and taken to the work site along with portal cranes, etc. [BFR is a classification scheme for freight wagons on IR. B indicates bogie wagon, F indicates flat car, and R indicates rapid (forced) discharge]. The old track is dismantled and new panels are laid with the help of portal cranes. A fully equipped train called the PQRS rake that consists of the following parts is then taken to the site of work.

(b) Coal wagon (for recoupment of coal in the engine)

(d) Guard compartment (for controlling the movement of the train)

Semi-mechanized track renewal work is then carried out in the following sequence.

1.  The auxiliary track with a 3.4-m gauge is first laid at the location where re-laying is to be done. The rails of the existing track are also replaced with 13-m service rails.

2.  A fully equipped train comprising of the various components and loaded with prefabricated panels is taken to the work site after setting up a traffic block, and also a power block in the case of an electrified section.

3.  The portal cranes are then unloaded mechanically on the auxiliary track of a 3.4-m gauge.

4.  The portal cranes are utilized to dismantle the two panels of the existing track and load them onto empty BFRs.

5.  The ballast bed is prepared manually and levelled up to a predetermined point.

6.  On the return trip, the portal cranes are utilized to lift the pre-assembled panels of concrete sleepers from the BFRs and lay them on the levelled ballast bed. 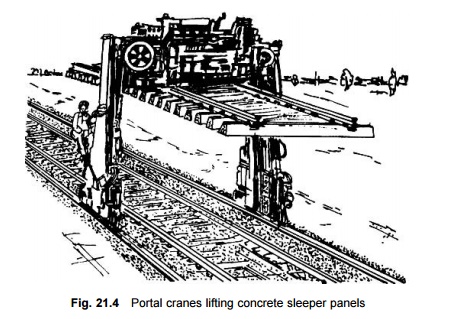 The new panels are then connected using fish plates, fittings, and fastenings. This method of re-laying is quick and independent and is best suited to Indian conditions. It is possible to achieve an average output of about 200 m per effective hour of working. About 0.8 km of re-laying can be accomplished in a 4-hr block.