The torque speed characteristic of synchronous reluctance motor is shown in fig.

The torque speed characteristic of synchronous reluctance motor is shown in fig. The motor starts at anywhere from 300 to 400 percent of its full load torque (depending on the rotor position of the unsymmetrical rotor with respect to the field winding) as a two phase motor. As a result of the magnetic rotating field created by a starting and running winding displaced 90° in both space and time.

At about ¾th of the synchronous speed a centrifugal switch opens the starting winding and the motor continues to develop a single phase torque produced by its running winding only. As it approaches synchronous speed, the reluctance torque is sufficient to pull the rotor into synchronism with the pulsating single phase field. The motor operates at constant speed up to a little over 20% of its full load torque. If it is loaded beyond the value of pull out torque, it will continue to operate as a single phase induction motor up to 500% of its rated speed. 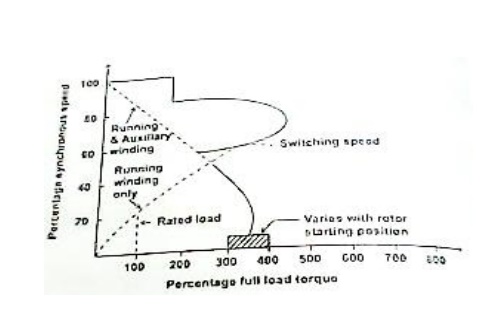 v   High cost than induction motor but lower than any type of PM motors.

v   Sensor less control is much easier due to motor saliency.

v   Line started reluctance motors can be parallel with open loop control if the load does not change suddenly.