Topical glucocorticosteroids are the most widely pre-scribed drugs for skin diseases.

Drug absorption is enhanced by the use of agents with lipophilic side chains; by application of the drug to larger areas of skin, to inflamed areas, and/or for long periods; and by the use of occlusive dressings. Like their systemic counterparts, topical glucocorticosteroids have myriad pharmacological effects. Especially important in skin diseases are their antiinflammatory and immuno-suppressive effects and their catabolic characteristics (hence their usefulness in eczematous dermatitis and their toxicity of dermal atrophy, respectively).

Although their exact mechanism of action is un-clear, they are known to inhibit the expression of vari-ous cytokines and adhesion molecules and to antago-nize the activity of transcription factors, including NF-B, NF-AT, and AP-1.

Topical corticosteroids are most useful in inflamma-tory dermatoses, such as eczematous dermatitis and pso-riasis; they may also be helpful in other skin diseases that have a prominent inflammatory component, such as au-toimmune blistering diseases (e.g., bullous pemphigoid and pemphigus vulgaris) and lupus erythematosus.

Many compounds are available in both proprietary and generic forms, and their bioequivalence is difficult to document. Nonetheless, the drugs are classified into seven categories according to their relative potencies (Table 41.1). 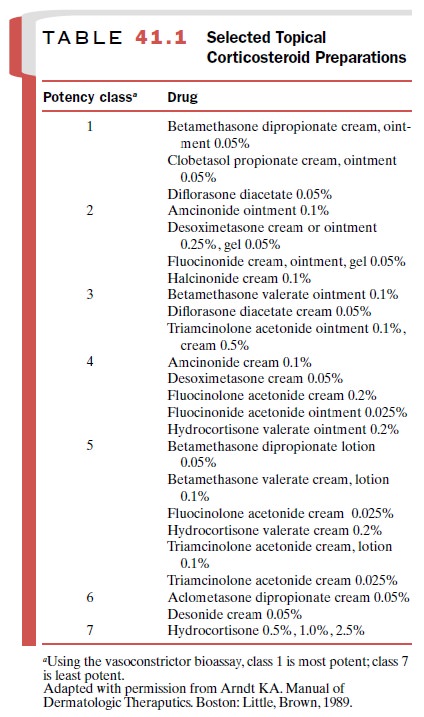 Systemic toxicity from topical corticosteroids can occur, particularly from the more potent agents. Cushing’s syndrome, although rare, has been reported.

Milder suppression of the hypothalamic–pituitary– adrenal axis is more common. Local toxicity is relatively frequent and may not be reversible. Dermal atrophy, appearing as striae or telangiectasias, is especially likely in intertriginous areas, where occlusion occurs naturally and the skin is likely to be thin. Less commonly, steroid-induced acneiform eruptions, rosacea, and perioral der-matitis can occur. Glaucoma and cataracts have been reported from chronic application around the eye. The normal inflammatory response to local infections may be masked by corticosteroids, complicating diagnosis and therapy. Contact allergy to the glucocorticosteroid preparations has been recognized with increasing fre-quency. This may present as diagnostically confusing eczematous dermatitis or unresponsiveness of the original dermatosis to treatment because the steroid– allergen maintains partial antiinflammatory properties.