Home | | The Diversity of Fishes: Biology Evolution and Ecology | Threatened and endangered fishes - Extinction and biodiversity loss
Posted On :  07.08.2017 07:05 pm

Chapter: The Diversity of Fishes: Biology, Evolution, and Ecology: Conservation and the future of fishes

Designation of a fish species as threatened or endangered is a complicated process influenced by political as well as biological concerns.

Designation of a fish species as threatened or endangered is a complicated process influenced by political as well as biological concerns (see Wheeler & Sutcliffe 1991; Helfman 2007). The International Union for the Conservation of Nature (IUCN) publishes catalogs of such species periodically, in which it lists the numbers of plants and animals worldwide that are considered to be Critically Endangered, Endangered, Vulnerable, or otherwise at risk. Its Red List for 2006 identified 1170 fish species worldwide that wereimperiled, and another 93 extinct, all of the latter from fresh water. The accuracy of such estimates is constrained by our limited knowledge of the popu lation status of fishes in most parts of the world: 35 (38%) of the 93 extinct taxa are from North America or Europe, and fully 43 of the 58 developing world species are (primarily Lake Victoria) cichlids. This means that only 15 species or 16% of known extinctions among fishes were noncichlid, third world taxa. Conservatively, 85% of freshwater fishes occur in the tropics (e.g., Berra 2001), making our calculations of extinctions there a vast underestimation that must reflect scientific effort as much as it reflects environmental degradation (Harrison & Stiassny 1999). Aside from records for certain industrialized nations (Table 26.1), we know comparatively little. North America

Endangered and threatened freshwatera fishes of North America, as recognized and protected by federal authorities under the US Endangered Species Act (ESA), the Canadian Species at Risk Act (SARA), and the Mexican Norma Oficial Mexicana NOM-059-ECOL-2001. “Endangered” species face imminent extinction through all or a significant part of their range. “Threatened” species are likely to become endangered in the near future. 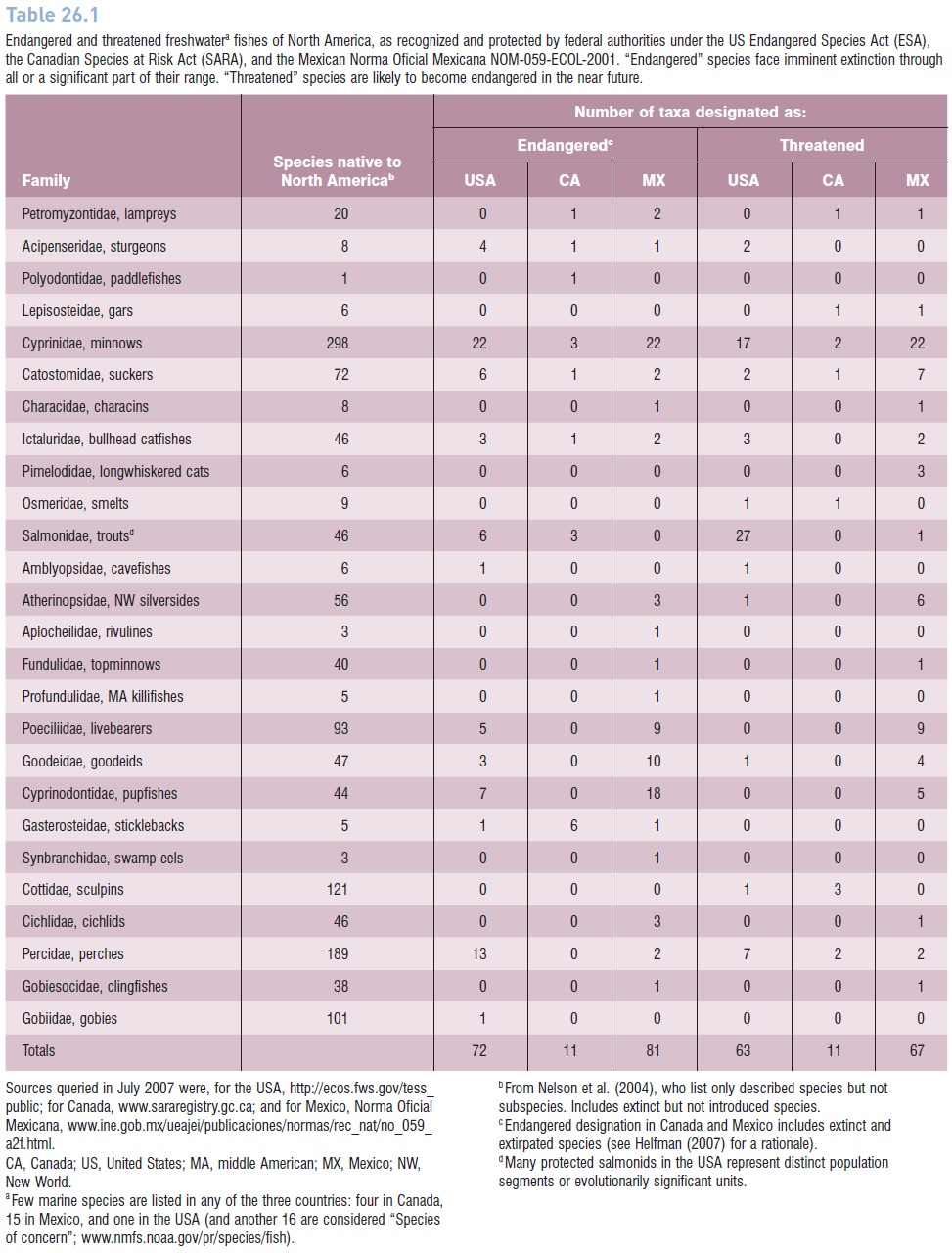 has about 1000 freshwater fish species, of which about 350 (35%) are in need of protection throughout all or part of their range. Of Europe’s approximately 350 species of freshwater fishes, about 40% are in serious need of protection. Australia has 200 freshwater species, of which about 15– 30% are in trouble. About 60% of South Africa’s 100 species are similarly at risk (Lelek 1987; Williams et al. 1989; Kottelat 1997, 1998; ASFB 2001; Skelton 2002; Jelks et al.2008). In tropical countries, with their thousands of endemic species and rapidly dwindling rainforests, faunal surveys are incomplete and we have no way of estimating which species are declining and which habitats need protection. It is estimated that, worldwide, between 20% and 35% of the world’s approximately 11,000 species of freshwater fishes and perhaps 5% of 17,000 marine species are in serious decline or already extinct (Moyle & Leidy 1992; Leidy & Moyle 1999; Helfman 2007).

The data from species known to be extinct are sobering. Harrison and Stiassny (1999), using strict criteria and a conservative approach, estimated that between 95 and 171 known fish extinctions had occurred. The former number is close to the 93 extinctions recognized by the IUCN in 2006. Unresolved, problematic, and debatable extinctions raise the number to between 210 and 290, depending on how many cichlids from Lake Victoria are included. In North America, 40 distinct fishes (27 species and 13 subspecies) became extinct in the past century (Miller et al. 1989) (Fig. 26.1A). Ten of these species had apparently viable populations in 1979, reflecting an increasing extinction rate (e.g., 52% of the extinctions occurred between 1900 and 1964, the remaining 48% disappeared in only the next 25 years). The causes of extinction are often discernible. Habitat alteration is the most frequently cited factor, causing 73% of extinctions. Other factors include introduced species (68%), chemical altera tion or pollution (38%), hybridization(38%), and overharvesting (15%). 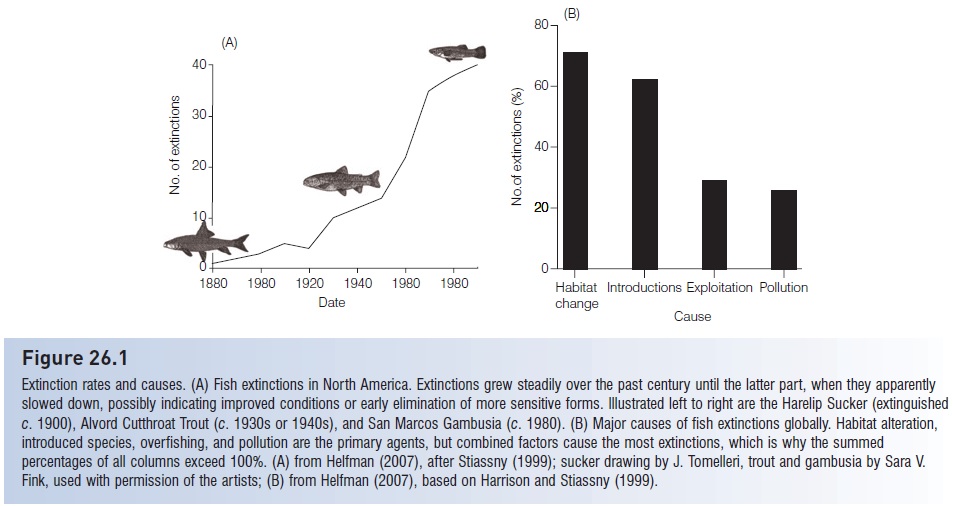 Extinction rates and causes. (A) Fish extinctions in North America. Extinctions grew steadily over the past century until the latter part, when they apparently slowed down, possibly indicating improved conditions or early elimination of more sensitive forms. Illustrated left to right are the Harelip Sucker (extinguished c. 1900), Alvord Cutthroat Trout (c. 1930s or 1940s), and San Marcos Gambusia (c. 1980). (B) Major causes of fish extinctions globally. Habitat alteration, introduced species, overfishing, and pollution are the primary agents, but combined factors cause the most extinctions, which is why the summed percentages of all columns exceed 100%. (A) from Helfman (2007), after Stiassny (1999); sucker drawing by J. Tomelleri, trout and gambusia by Sara V. Fink, used with permission of the artists; (B) from Helfman (2007), based on Harrison and Stiassny (1999).

Extinction factors often operate in combination. Some reported extinctions represented the elimination of isolated populations, such as the Miller Lake Lamprey, Lampetra minima. This unique dwarf lamprey was endemic to one small lake in southern Oregon. Because it parasitized introduced trout, it was poisoned into apparent extinction (Bond & Kan 1973). Although remnant populations were subsequently found in tributary streams, the lamprey has not recolonized Miller Lake (Lorion et al. 2000). Other extinct species were, however, widespread, such as the Harelip Sucker, Lagochila lacera, which occurred commonly in large rivers of at least eight eastern states and probably succumbed to siltation of its clear water, pool habitat. The Blue Pike, Sander vitreus glaucus, a subspecies of the Walleye, sustained a large fishery in Lake Erie and Lake

Ontario until the mid-1950s; in some years, it made up more than half the commercial catch in those lakes. Pollution, introduced fishes, habitat degradation, overharvesting, and hybridization all contributed to its demise (Miller et al. 1989). It was offi cially declared extinct in 1975.

Certain obvious patterns arise from lists of species at risk. Freshwater fishes account for practically all extinct and compromised taxa, reflecting the sensitivity of, human density near and impact on, and the degraded condition of freshwater habitats. Certain regions and habitat types appear most frequently on the lists.

In North America, the isolated and disjunct aquatic systems of the otherwise arid southwest, such as the spring pools and rivers of the Great Basin and of Mexico, have been centers of evolution and human-induced extinction (Minckley & Deacon 1991;  North American deserts). Specialist species endemic to small, isolated habitats make up the majority of extinct and endangered fishes because both they and their habitats are exceedingly vulnerable to human activity. An isolated stream or pond can be easily destroyed by the dumping of toxic substances, introduction of predators, habitat modification, or water withdrawal (e.g., the Devil’s Hole Pupfish, Cyprinodon diabolis, which occupies a 3 x6 m limestone shelf in a cave, the smallest habitat of any vertebrate).

It is not just small, isolated habitats though that are vulnerable. Big river fishes with special needs for clean water, such as sturgeons, paddlefishes, and some suckers and large minnows, have also been strongly affected. Large rivers are primary sites of human habitation and impact; such habitats have been degraded for centuries due to pollution, siltation, water withdrawal, and damming. Comparatively few marine fishes appear on lists of species at risk (but see Musick et al. 2001). Marine fishes have broad distributions and a greater chance for replacement by neighboring populations. Hence, aside from some heavily exploited coastal and pelagic species (e.g., many sharks, Bluefin Tuna) and long-lived, slow-growing forms (Orange Roughy, Patagonian Toothfish), the most vulnerable marine fishes are estuarine species that have been affected because of their dependence on fresh water in their life cycle, such as the giant Totoaba, Totoaba macdonaldi, and many salmonids .