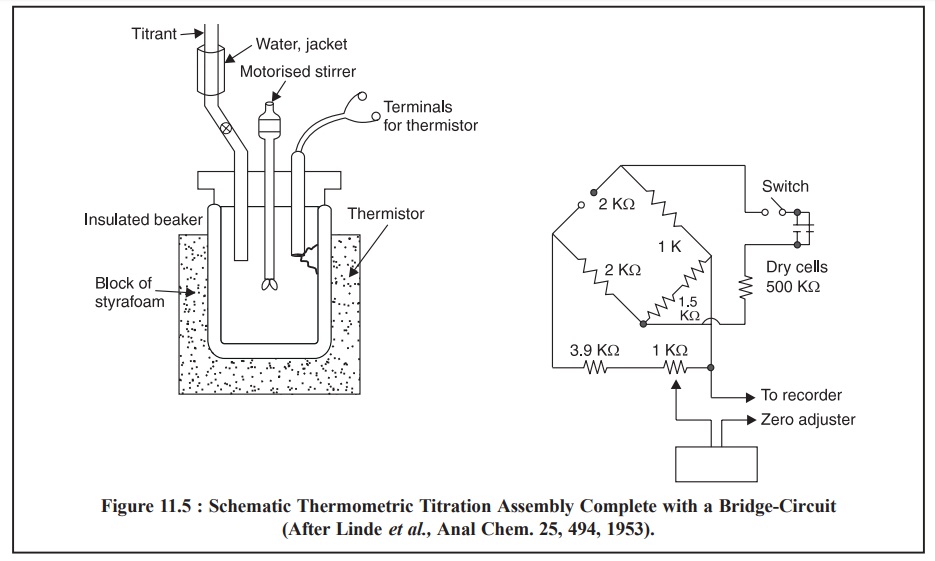 The thermometric titrations (TT) make use of ‘heats of reaction’ to obtain titration curves. In usual practice, the temperature of solution is plotted against the volume of titrant.

The thermometric titrations (TT) make use of ‘heats of reaction’ to obtain titration curves. In usual practice, the temperature of solution is plotted against the volume of titrant. TT is performed by allowing the titrant to flow from a thermostated-burette directly into a solution contained in a thermally-insulated vessel, and subsequently the observed change in temperature of the solution is recorded precisely either during con-tinuous addition of titrant or after every successive incremental addition. The end-point is aptly indicated by a sharp break in the curve.

As the dielectric constant of a solvent exerts little effect on the thermometric titrations, the latter may be employed effectively in most non-aqueous media.

Hence, in a broader-sense TT may be utilized in a number of reactions with greater efficacy, for in-stance : complexation, precipitation, redox, neutralization. Further, TT can be used to titrate gases against other gases devoid of a liquid-phase ; and to titrate liquid solutions with gaseous reagents.

Fiaure 11.5, represents the schematic thermometric titration assembly complete with a bridge-circuit. To minimise heat transfer losses from the solution by its immediate surroundings, the thermometric titrations are usually carried out in an isolated-beaker tightly closed with a stopper having provision for a burette-tip, a motorized-glass stirrer, and a temperature-monitoring arrangement. 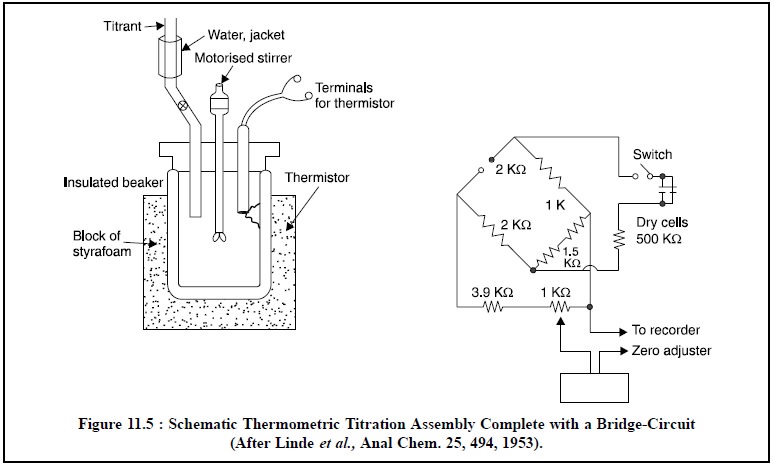 (a) Introduce the titrant from a burette that is duly mounted in a thermostated-water-jacket to maintain the temperature of the titrant within ± 0.05°C,

(b) Experimental parameters are predetermined in such a fashion such that the volume of titrant needed for each titration must lie between 1-3 ml,

(e) Variations in temperature are measured with the help of a sensitive thermister-sensing-element with fast response, that is sealed completely in glass and immersed in solution,

(f) In the course of a thermometric titration, the thermister attached to the insulated-beaker is connected to one arm of the Wheatstone Bridge as displayed in Figure 11.5. The values of the circuit component listed are for a thermister having an approximate resistance of 2 KΩ and a sensitivity of –0.04 Ω/Ω/°C in the 25°C temperature range. Hence, an observed change of 1°C an unbalanced potential of 15.7 mV, and

(g) The heat of reaction is either absorbed or generated upon addition of the titrant to the beaker, thereby unbalancing the Wheatstone Bridge caused by simultaneous variations in the resistance (temperature) in the insulated-beaker thermister. Thus, the bridge unbalance potential is promptly plotted by the recorder.

Note : (i) To minimise the temperature variations between the titrant and the solution and also to obviate volume corrections, the concentration of the titrant is invariably maintained 10–100 times higher than that of the reactant, and

(ii) To obtain optimum results, temperatures of the titrant and the solution must be always within 0.2°C of each other before a titration is commenced.

Thermometric titration curves usually represent both the entropy and the free energy involved. The titrant is added to the solution at a constant rate in order that the voltage output of the thermister-temperature-transducer changes linearly with time upto the equivalence point.

TT-method affords exact end-point due to :

(a) Coloured solutions, and

(b) Poisoning of Electrodes.

In usual practice it has been observed that thermometric titrations are mostly feasible with such sys-tems that provide rates of temperature change more than 0.01°C/second.

A few typical examples are cited below :

(i) Lower limit of concentrations which can be titrated effectively is 0.002 M,

(ii) No transfer of heat between the titration vessel and its immediate surroundings is allowed, and

(iii) During titration temperature fluctuation must not exceed 0.001°C.

Various important applications of thermometric titrations are enumerated below :

(i) Precipitation Reactions : e.g., Chloride ions (Cl–) with Ag+ ions. Besides, phase relations have been studied extensively in precipitation reactions.

(iv) Estimation of H2O and (CH3CO)2O concentrations in a mixture : The concentration of either of these reactions in the presence of the other may be determined successfully by measuring the rise in temperature taking place during the exothermic reactions of water and acetic anhydride in gla-cial acid solution along with a trace of perchloric acid (HClO4) acting as a catalyst, and

(v) Benzene in Cyclohexane : Benzene may be estimated rapidly with fairly good accuracy in cyclohexane by measuring the heat of nitration, whereby a previously prepared standard nitrating acid mixture (benzene and cyclohexane) and the subsequent temperature rise is noted which is a direct function of the quantity of benzene present.

Details involving various experimental parameters for the above estimation are enumerated below :

4.1. Estimation of Benzene in Cyclohexane

·              Weigh 50 g of sample in a Bakelite screw-cap bottle and in a similar bottle put the standard nitrating mixture. Place these two bottles in a thermostat maintained at 20°C until the contents have attained an equilibrium temperature,

·              Transfer 50 ml of the standard nitrating-acid to the insulated vessel and insert the motorised stirrer. Just wait for about 3-5 minutes and then start the motorized stirrer. After exactly 1 minute record the initial temperature,

·              Stop the motor. Insert the sample into the reaction vessel and start the stirrer. Now, start taking readings of the rise in temperature after each interval 1, 2, 3 and 5 minutes respectively, and