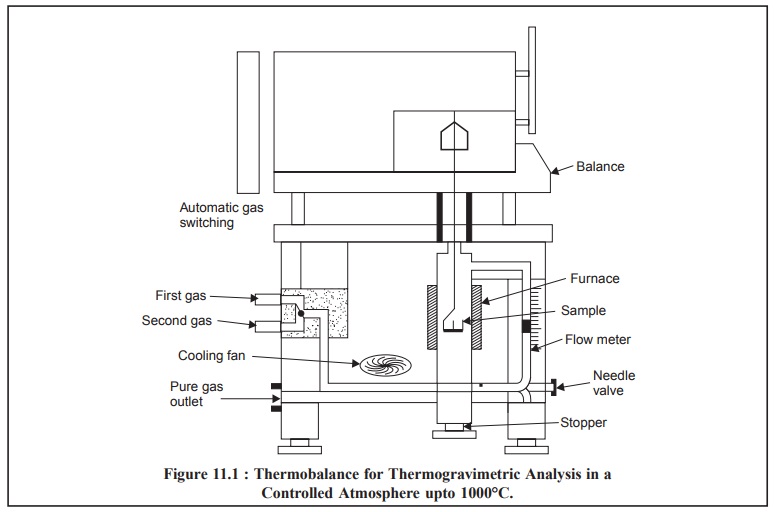 A large number of chemical substances invariably decompose upon heating, and this idea of heating a sample to observe weight changes is the underlying principle of thermogravimetric analysis (TGA).

A large number of chemical substances invariably decompose upon heating, and this idea of heating a sample to observe weight changes is the underlying principle of thermogravimetric analysis (TGA). However, TGA may be sub-divided into two heads, namely :

(a) Static (or Isothermal) Thermogravimetric Analysis, and

In this particular instance the sample under analysis is maintained at a constant temperature for a period of time during which any changes in weight are observed carefully.

In dynamic thermogravimetric analysis a sample is subjected to conditions of predetermined, carefully controlled continuous increase in temperature that is invariably found to be linear with time.

The essential requirements for an instrument (Figure 11.1) meant for thermogravimetric analysis are, namely :

(a) A high-precision balance,

(b) A furnace adequately programmed for a linear rise of temperature with time, and 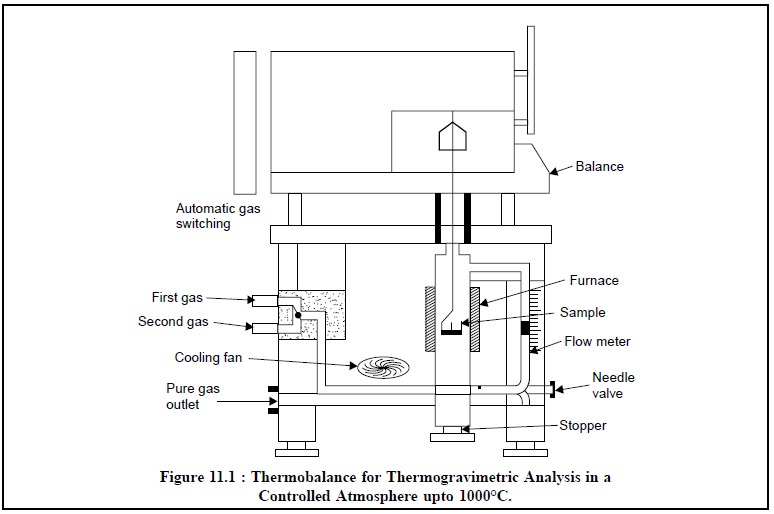 They are usually of two types :

(a) Null-point Type : It makes use of an appropriate sensing-element which aptly detects any slightest deviation of the balance beam and provides the application of a restoring force, directly propor-tional to the change in weight, thereby returning the beam to its original null-point. The restoring-force is subsequently recorded either directly or with the aid of a transducer.

(b) Deflection Type : It is essentially based on either a conventional analytical balance consisting of helical spring, cantilever beam and strain gauze or a torsion analytical balance involving the conversion of deviations directly into a record of the weight change.

The furnace must be designed in such a fashion so as to incorporate an appropriate smooth input thereby maintaining either a fixed temperature or a predetermined linear-heating programme (e.g., 10°C-600°C per hour).

The temperature control of the furnace is satisfactorily achieved via a thermocouple mounted very close to the furnace-winding. The maximum operational temperature may be obtained by using different thermocouples as indicated below :

The recording device must be such so as to :

(i) record both temperature and weight continuously, and

(ii) make a definite periodic record of the time.

The ‘thermogram’ for calcium oxalate monohydrate (CaC2O4.H2O) is presented in Figure 11.2. The successive plateaus correspond to the anhydrous oxalate (100-250°C), calcium carbonate (400-500°C), and finally calcium oxide (700-850°C). In other words, these plateaus on the decomposition curve designate two vital aspects, namely :

(a) clear indication of constant weight, and

(b) stable phases within a specified temperature interval. The chemical reactions involved may be summarized as follows :

In  the  thermogram  (Figure  11.2),  which  vividly  illustrates  the  thermogravimetric  evaluation  of CaC2O4.H2O, it is ensured that the weight of this product decreases in several stages, namely : 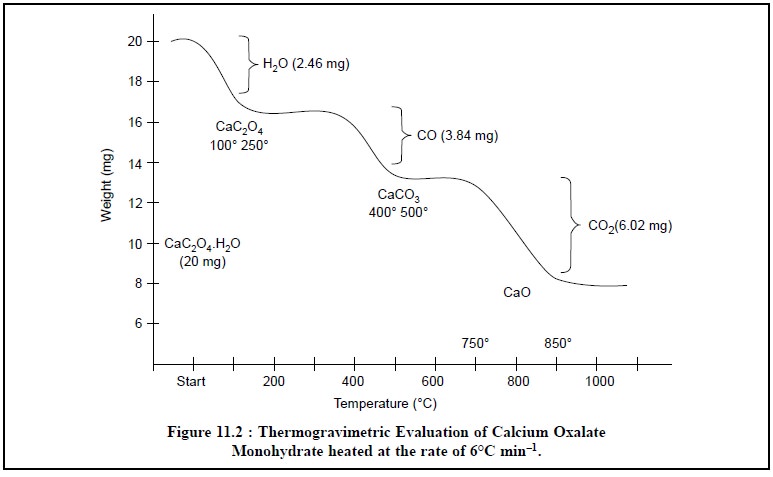 Stage 1 : The water of hydration (or crystallization) from calcium oxalate monohydrate is lost which corresponds to 2.46 mg (12.3%) equivalent to 1 mole of H2O in the temperature range 100-250°C.

It is quite evident that in a multicomponent system wherein more than one component exhibits weight variations and that too at different temperature regions, the composition of the original compound may be estimated as depicted in Figure 11.2.

The most broadly based application of the thermogravimetric analysis (TGA) has been visualized and exploited in the investigation of analytical methods, such as :

(i) Determining appropriate forms for many elements,

(ii) Screening and testing of substances which may be used as potential analytical standards (primary standard), and

(iii) Direct application of the technique in analytical assays.

A few typical applications of TGA are, namely :

(a) Plateaus for hydrates are sometimes based on the initial water content (i.e., water of crystalliza-tion). It has been observed that in humidified air at low heating rates, hydrates usually give rise to good plateaus.

(b) Analysis of flue-gas scrubber system in environmental analysis.

The flue-gas emitted from a coal-fired-power-plant is subjected to scrubbing by the aid of wet limestone to get rid of sulphur dioxide (SO2) as completely as possible. TGA helps in monitoring the system by carrying out the analysis of the products resulting from the scrubbing process, that mainly consist of (i) CaCO3 ; (ii) CaSO3 . CaSO3 . 1/4 H2O, and (iii) CaSO4 . 2H2O.

The thermogram obtained from TGA provides the following valuable informations which suggests the decomposition occurring at three distinct stages thereby causing the loss due to two moles of water, half-a-mole of water and one mole of CO2.

(c) The stepwise degradation of organic polymers has received adequate attention which has broadened the in-depth knowledge of polymer chemistry. In this specific instance the sample is either heated under vacuum or in an inert atmosphere (of N2).

(d) The thermogravimetric data may be employed to evaluate the kinetic parameters of weight varia-tions in reactions.