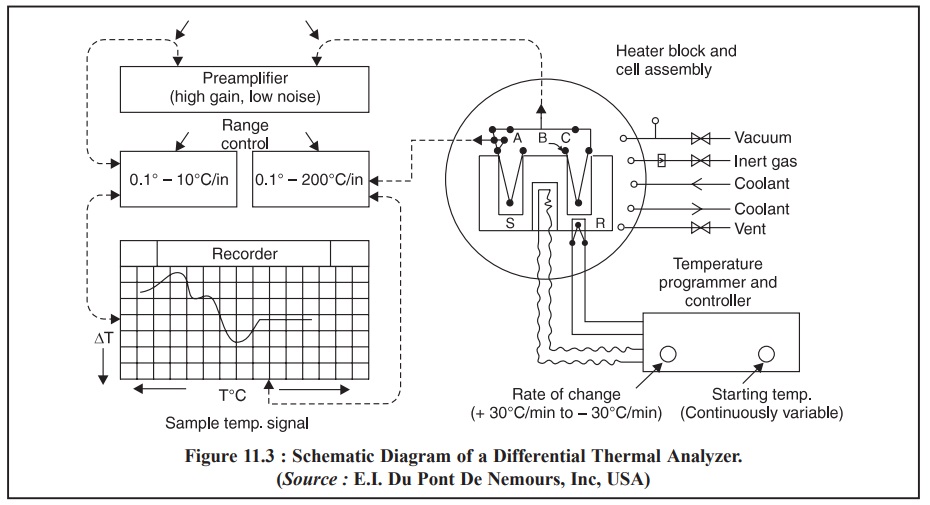 The difference of temperature between the sample under estimation and a thermally-inert reference material is continuously recorded as a function of furnace temperature in differential thermal analysis (DTA).

The difference of temperature between the sample under estimation and a thermally-inert reference material is continuously recorded as a function of furnace temperature in differential thermal analysis (DTA). In actual practice both TGA and DTA are regarded as complementary techniques whereby information gathered by the usage of one approach is invariably supplemented and enhanced by the application of the other method. The range of phenomena measurable during a DTA-run is found to be much larger than in a TGA-run.

It is pertinent to mention here that in the course of TGA many vital processes, for instance : crystalli-zation, crystalline transitions, pure fusion reactions, glass transitions, and solid-state reactions devoid of vola-tile components might not be indicated as they happen to cause little change in weight of the sample. TGA invariably describes with ample precision the stoichiometry related to chemical changes that are indi-cated during DTA by an endothermal or exothermal duration from the base-line.

(iv) Preamplifier and Recorder, and 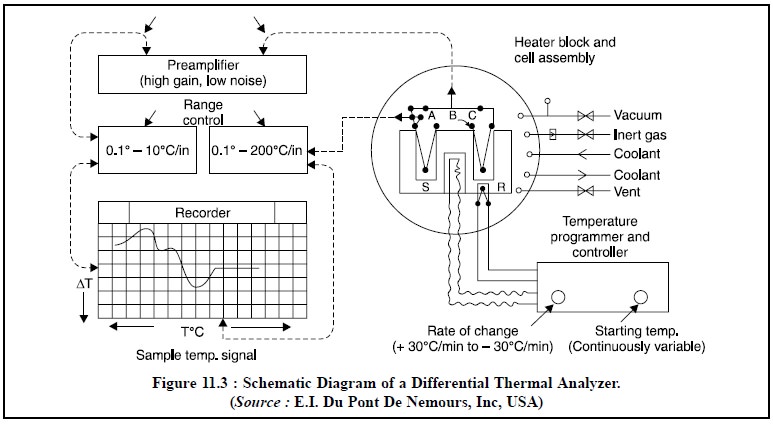 (a) Thermocouples employed are normally unsheathed Platinum Vs Platinum and Sodium Vs 10% Rhodium. The said two thermocouples help in measuring the difference in temperature between a sample S and an absolutely inert reference substance R, as both are subjected to heating in a ceramic or metal block inside a furnace being operated by a temperature programmer and controller.

(b) The output of the differential thermocouple is amplified adequately through a high gain, low-noise preamplifier and subsequently hooked to the recorder, one axis of which is driven by the block temperature signal and is measured by a third thermocouple.

(c) Heating/Cooling Device : A sufficient versatility is achieved by the aid of a pressure-vacuum, high-temperature electric furnace. An almost constant heating rate is usually achieved by using a motor-driven variable auto transformer.

Both heating rates and cooling rates may be conveniently adjusted continuously :

(i) Insert a very thin thermocouple into a disposable sample tube 2 mm in diameter and containing 0.1-10 mg of sample,

(ii) Another identical tube is either kept empty or filled with a reference substance, such as quartz, sand, alumina or alundum powder,

(iii) The two tubes are simultaneously inserted into the sample block and subsequently heated (or cooled) at a uniform predetermined programmed rate, and

(iv) DTA—being a dynamic process, it is extremely important that all aspects of the technique must be thoroughly standardised so as to obtain reproducible results. A few of these aspects vital aspects are : 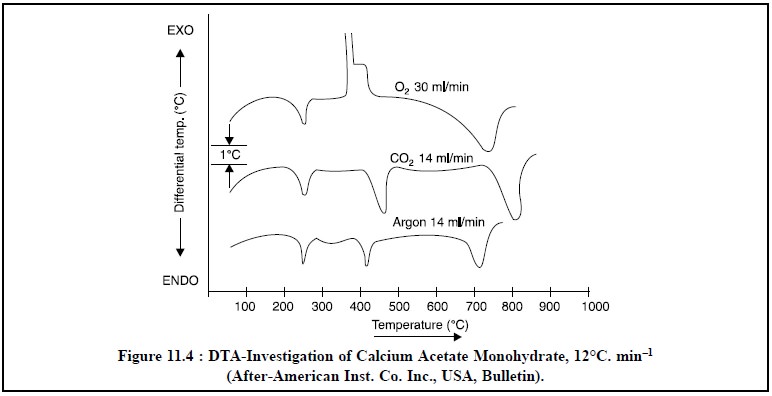 The chemical reactions involved in the differentiated thermal analysis of calcium acetate monohydrate may be expressed as follows :

Stage I : The endothermal dehydration of calcium acetate monohydrate occurs giving rise to the anhydrous salt. It is easily noticed by an endothermal band on DTA curve between 200°C and 250°C.

Stage III : The decomposition of calcium carbonate to calcium oxide, which is a function of the partial pressure of the CO2 in contact with the sample. The endothermal band for the carbonate decomposition is sharply peaked spread over a relatively narrower temperature range in an atmosphere of CO2.

The various important applications of DTA are :

(i) Rapid identification of the compositions of mixed clays,

(iii) Critically examining in a specific reaction whether a new compound is actually formed or the product is nothing but an unreacted original substance, and