The theoretical spectrum informing the practice of group therapy is broad. Within psychodynamics, some emphasize drive theory, object relations, or self-psychology.

Group theoreticians are generally categorized along a continuum of group as a whole, interpersonal and intrapsychic. Moreover, therapists using object relations, self-psychology or psychodynamic theories integrate their theoretical preferences along this continuum (Kibel, 1992; Harwood and Pines, 1998; Rutan and Stone, 2001). There are few purists and varying de-grees of integration is the norm (Table 67.2). 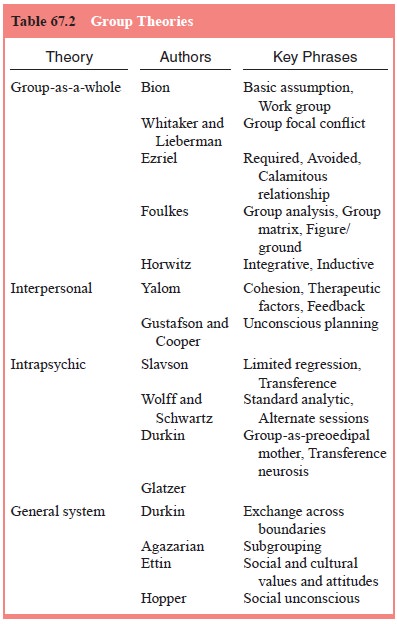 A common thread in many of these theories is that indi-viduals in their interaction and discourse within the group will exhibit their difficulties in relationships, which in turn provides a window into their internal world. In short, the group becomes a microcosm of their external world (Slater, 1966).

These theories emphasize whole-group processes as the pri-mary therapeutic vehicle. They subscribe to notions that mem-bers are influenced by the group dynamics and that one or more persons may speak for the entire group, including those who are silen

On the basis of Sullivanian principles, Yalom (1995) empha-sized the centrality of transactions in the here and now of the group as the primary, but not exclusive, therapeutic force for change. His formulation of “therapeutic factors” brought into sharp focus the importance of cohesion (which is a dynamic concept that implies that the group is attractive, “safe”, and that members have a commitment to the group goals and ideals). Yalom pays particular attention to members’ capacity to give and receive feedback. He asserts that maladaptive interpersonal transactions are the consequence of parataxic distortions (hav-ing some similarity to transference responses, i.e., arising from childhood experiences) that can be therapeutically altered by authentic human interaction, that is, feedback and consensual validation.

Intrapsychic theories are primarily application of dyadic theory into the group setting. The emphasis is on unconscious proc-esses with the group providing opportunities for patients to regress to a level of internal conflict or developmental arrest. These theories explore individual transferences, resistances and developmental arrests as the primary therapeutic focus. Peers may be experienced as siblings or as displacement objects from parental figures (Slavson, 1950; Wolf and Schwartz, 1962). Groups may either dilute or intensify transferences to the leader (Horwitz, 1994), which enables “stuck” patients to resolve im-passes occurring in dyadic treatment. Regression is limited, and the presence of others creates a balance between the external and the internal worlds (Durkin, 1964). Integration of an in-trapsychic framework with that of the group as a whole is con-tained in descriptions of members’ transferences to the group as a preoedipal maternal experience (Glatzer, 1953; Scheidlinger, 1974).

General systems theory is based on open systems theory (von Bertalanffy, 1966). Emphasis is placed on the boundaries separat-ing the group from the external world and members or subgroups from one another (Durkin, 1981). Emphasis on boundaries as worthy of therapeutic concern is evident in the group agreement. Agazarian (1997) elaborated systems concepts into a model of group treatment that focused on subgroups as the primary site of therapeutic attention. She asserted that by focusing on sub-groups, which contain individual differences and similarities, members are more prepared to address intrapsychic defenses and resistances.