Forming a psychotherapy group is a complex task and attention to organizational details will anticipate some of the potential haz-ards and smooth the path.

Forming a psychotherapy group is a complex task and attention to organizational details will anticipate some of the potential haz-ards and smooth the path. Composition, size, fees, place, duration and time of meetings are elements that require decisions in ad-vance of recruiting and preparing potential members.

The size of dynamically-oriented groups ranges from six to 10 members. Groups at the upper size range generally meet for lengthier periods to provide sufficient “airtime” for each person. Smaller groups (four members or less) may be threatened by fears of dissolution (Fulkerson et al., 1981). The duration of meetings is set for 75 to 120 minutes, the norm being 90 minutes. Most groups meet once weekly. Attention must be paid to the group space. An optimal room will comfortably seat eight to 10 persons with unobstructed views of one another. Seats do not have to be identical. Both the position and the type of seat members choose may assume considerable emotional significance. Access to the room needs consideration. Is there time for members to gather in the group room before the meeting, or is a waiting room necessary? In private settings, meetings are occasionally held in a waiting room and therapists must ensure that others do not intrude on that space.

Careful thought must be given to optimal group composi-tion (Table 67.3). Patients chosen for groups that will explore in-trapsychic elements should have a capacity for self-reflection and empathy with others. If possible, members with different person-ality styles should be selected to provide a spectrum of interac-tive patterns. Other long-term groups may be established with supportive goals and include patients with significant ego deficits. (Groups for the chronically mentally ill are discussed separately later.) Groups designed with a specialized format (e.g., women survivors of sexual abuse, male perpetrators, or individuals with eating disorders) generally are more focused on a symptom or a specific behavior and in such cases balanced membership is of lesser importance. 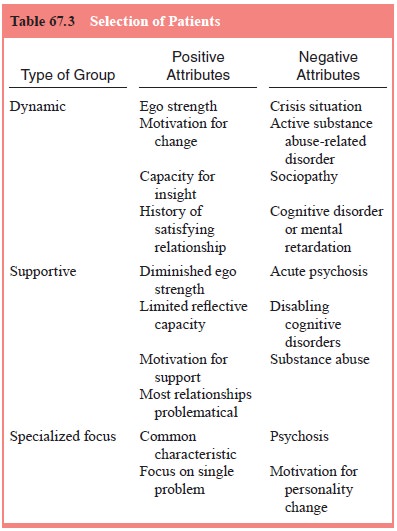 Few applicants requesting psychotherapy consider group treatment. Thus, gathering six to 10 individuals together may not be a simple task. Patients are more likely to agree to enter a group if the rationale is explained to them in some detail. Thus, the therapist needs to be clear about the relationship between group goals and patient goals (to be discussed below). The therapist also needs to be familiar with the patient’s history, coping style, symptoms and personality configurations. In obtaining a patient’s developmental history, the therapist can specifically search for the person’s interaction in group settings, such as school, church, recreation and family. Discussion of the person’s typical reactions to group situations helps engage the patient in examining his or her roles in interpersonal situations. The screening and preparatory interviews have five major tasks (Rutan and Stone, 2001):

·   Establish a preliminary alliance between patient and therapist.

·   Provide information about the nature of group treatment.

·   Discuss the group agreement and gain the patient’s acceptance.

Careful screening helps patients anticipate the tasks of en-tering a group. Such preparation will decrease, but not eliminate premature termination which may range from 20 to 50% of mem-bers in newly formed groups.

The agreement represents the framework in which treatment will proceed. It promotes a structure that defines boundaries between 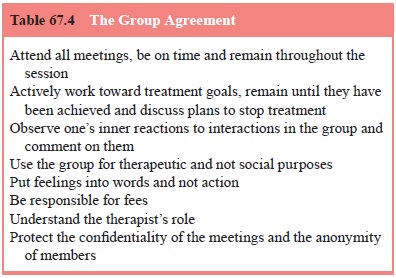 the group and the environment, among the members and with the therapist. Although members accept the agreement, they also break it. Such disruptions are valuable windows into understand-ing a person’s inner world. The therapist must distinguish be-tween acts that are disruptive to the group and those that carry more benign communications (Nitsun, 1996).

The initial element in the agreement addresses patients’ ability to attend all sessions. Those who have responsibilities that interfere with attendance should not be admitted into the group (e.g., executives whose conflicts make them unavailable once every third or fourth week). Similarly, persons who have time conflicts and would consistently come late or leave early should delay entry until their schedule can be adapted to that of the group.

In establishing goals, the patient and therapist enter into a conscious agreement to work toward specified change. However, unconscious elements contributing to a patient’s behaviors are likely to emerge in the therapeutic process that may point to ad-ditional goals worthy of pursuit. Instructions regarding termina-tion are an additional part of this agreement element. Patients generally have little idea how to stop treatment, and leaders can indicate that sufficient time to take leave of the group is an im-portant part of the therapy. Plans to leave should be discussed and then a date for departure established that allows sufficient time to say goodbye.

The succeeding three elements in the agreement address patient behaviors within the group. Patients slowly learn that one of the major benefits of therapy follows from addressing feelings and reactions to one another and to the therapist. Consistent at-tainment of this goal suggests that the group is functioning at a mature level. Physical contact and verbal abuse are prohibited. Patients unable to contain these behaviors may be asked to leave the session temporarily. Although physical touching or hugging may seem soothing and reassuring to some individuals, for oth-ers it is a threat to their personal boundaries. Those behaviors are open to analysis.

The group leader assumes a major, but not the sole, responsibil-ity for the treatment. The therapist’s special role is established in part by the agreement. Within that framework, clinicians begin to shape the group to provide participants a way of using their experience to learn about themselves. Assuming that patients’

optimal learning begins with a focus on transactions within the group, psychodynamically-oriented therapists try to find ways of helping members examine resistances and defenses against such engagement. In contrast, clinicians using a more strictly interper-sonal (Yalom, 1995) or a system-centered orientation (Agazarian, 1997) may actively instruct members to address one another directly in the here and now of the meeting. The goals of the different approaches are similar: to use the intragroup processes to promote personal change. Therapists always benefit from ex-amining their own contributions to the construction of the group dialogue. The therapist’s focus, however, is not exclusively on in-group processes. Rutan and Stone (2001) list six foci for the therapist’s attention (Table 67.5):

The major but not exclusive focus promoting change is members learning from the here and now of treatment. Groups develop a rhythm in which members might address outside events as a warm-up to exploring in-group interactions, or they might focus on current feelings and then expand on those experiences in respect to their outside lives, now, in the past, or in the future. Integration of a person’s experiences across an extended period enhances feelings of continuity and stability of the self.

The therapist monitors the ebb and flow of affects which reflect the group developmental stage. Members’ capacity to tol-erate intense feelings is enhanced as trust and cohesion increase. The dialectical tension between affect and cognition is seen in members’ roles as they attempt to contain dysphoric states and sustain emotional contacts with one another. Patients may find ways of managing intense feelings through scapegoating or ex-ternalizing. These are group-wide processes and should be ad-dressed as such. Some individuals require cognitive understand-ing before risking immersion into feelings, whereas others search for affective connections before integrating their experience cognitively.

The therapeutic process is fueled by members’ searching for new solutions to their developmental arrests and conflicts. In general, members communicate feelings about their in-group ex-perience through associations (not always conscious) to events in their outside world. As such, the associations can be understood as metaphoric communication that informs the treatment proc-ess. After a successful interpretation or clarification, associations to external or historical events may represent integration of those experiences into members’ psychic structure.

Considerable individual change takes place via the group relationship without overt cognitive integration. The sense of sharing, of being understood, of having needs met, of being responded to in an empathic (corrective) manner may stabilize a shaky psychic structure and, some patients, to their therapist’s surprise, may successfully terminate treatment without having achieved understanding (Stone, 1985). These are the powerful forces for change, labeled “corrective emotional” experiences. Patients also strive for cognitive integration of their thoughts andfeelings and, through experiencing and then understanding the here-and-now, external and developmental incidents, they con-solidate their learning. Patients are then more prepared to trans-fer their learning from therapy to situations in their outside world (Ezriel, 1973).

Members’ level of self and ego development influence the course of the group as a therapeutic agent. Persons suffering from archaic conflicts of trust or psychic safety, as expressed in a vari-ety of personality disorders (the difficult patient), may require an extended period of therapy exploring these issues. Transferences to the group, leader, or peers emerge that reflect these develop-mental levels.