A parcel of land may be described by metes and bounds, by giving the coordinates of the property corners with reference to the plane coordinates system, by a deed reference to a description in a previously recorded deed, or by References to block and individual property numbers appearing on a recorded map.

A parcel of land may be described by metes and bounds, by giving the coordinates of the property corners with reference to the plane coordinates system, by a deed reference to a description in a previously recorded deed, or by References to block and individual property numbers appearing on a recorded map.

By Metes and Bounds

When a tract of land is defined by giving the bearings and lengths of all boundaries, it is said to be described by metes and bounds. This is an age-old method of describing land that still forms the basis for the majority of deed descriptions in the eastern states of the United States and in many foreign lands. A good metes-and-bounds description starts at a point of beginning that should be monumented and referenced by ties or distances from well-established monuments or other reference points. The bearing and length of each side is given, in turn, around the tract to close back on the point of beginning. Bearing may be true or magnetic grid, preferably the former. When magnetic bearings are read, the declination of the needle and the date of the survey should be stated. The stakes or monuments placed at each corner should be described to aid in their recovery in the future. Ties from corner monuments to witness points (trees, poles, boulders, ledges, or other semipermanent or permanent objects) are always helpful in relocating corners, particularly where the corner markers themselves lack permanence. In timbered country, blazes on trees on or adjacent to a boundary line are most useful in reestablishing the line at a future date. It is also advisable to state the names of abutting property owners along the several sides of the tract being described. Many metes-and-bounds descriptions fail to include all of these particulars and are frequently very difficult to retrace or locate in relation to adjoining ownerships.

One of the reasons why the determination of boundaries in the United States is often difficult is that early surveyors often confined themselves to minimal description; that is, to a bare statement of the metes metesToday, good practice requires that a land surveyor include all relevant information in his description.

"All that certain tract or parcel of land and premises, hereinafter particularly described, situate, lying and being in the Township of Maplewood in the County of Essex and State of New Jersey and constituting lot 2 shown on the revised map of the Taylor property in said township as filed in the Essex County Hall of Records on March 18, 1944.

"Beginning at an iron pipe in the northwesterly line of Maplewood Avenue therein distant along same line four hundred and thirty-one feet and seventy- one-hundredths of a foot north-easterly from a stone monument at the northerly corner of Beach Place and Maplewood Avenue; thence running (1) North forty-four degrees thirty-one and one-half minutes West along land of. . ."

Another form of a lot description maybe presented as follows:

"Beginning at the northeasterly corner of the tract herein described; said corner being the intersection of the southerly line of Trenton Street and the westerly line of Ives Street; thence running S6 o 29´54´´E bounded easterly by said Ives Street, a distance of two hundred and twenty-seven one hundredths (200.27) feet to the northerly line of Wickenden Street; thence turning an interior angle of 89 o 59´16´´ and run-ning S83 o 39´50´´W bonded southerly by said Wickenden Street, a distance of one hundred and no one-hundredths (100.00) feet to a corner; thence turn-ing an interior angle of. . . ."

You will notice that in the above example, interior angles were added to the bearings of the boundary lines. This will be another help in retracing lines 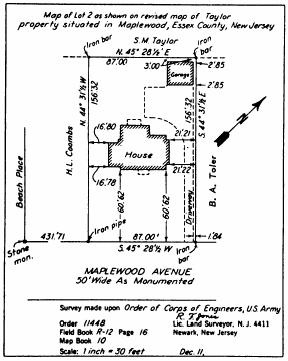