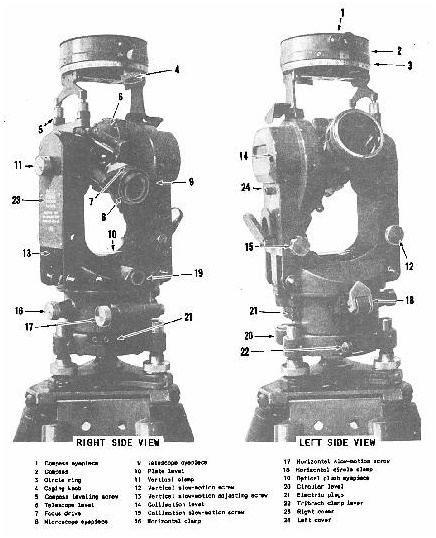 Located on the lower portion of the alidade, and adjacent to each other, are the horizontal motion clamp and tangent screw used for moving the theodolite in azimuth.

A theodolite is essentially a transit of high precision. Theodolites come in different sizes and weights and from different manufacturers. Although theodolites may differ in appearance, they are basically alike in their essential parts and operation. Some of the models currently available for use in the military are WILD (Herrbrugg), BRUNSON, K&E, (Keuffel & Esser), and PATH theodolites.

To give you an idea of how a theodolite differs from a transit, we will discuss some of the most commonly used theodolites in the U.S. Armed Forces.

The theodolite shown in figure 11-12 is a compact, lightweight, dustproof, optical reading instrument. The scales read directly to the nearest minute or 0.2 mil and are illuminated by either natural or artificial light. The main or essential parts of this type of theodolite are discussed in the next several paragraphs.

will minimize the possibility of ending the D/R pointing with a negative value.

LEVELS.- The level vials on a theodolite are the circular, the plate, the vertical circle, and the telescope level. The CIRCULAR LEVEL is located on the tribrach of the instrument and is used to roughly level the instrument. The PLATE LEVEL, located between the two standards, is used for leveling the instrument in the horizontal plane. The VERTICAL CIRCLE LEVEL (vertical collimation) vial is often referred to as a split bubble. This level vial is completely built in, adjacent to the vertical circle, and viewed through a prism and 450

mirror system from the eyepiece end of the telescope. This results in the viewing of one-half of each end of the bubble at the same time. Leveling consists of bringing the two halves together into exact coincidence, as 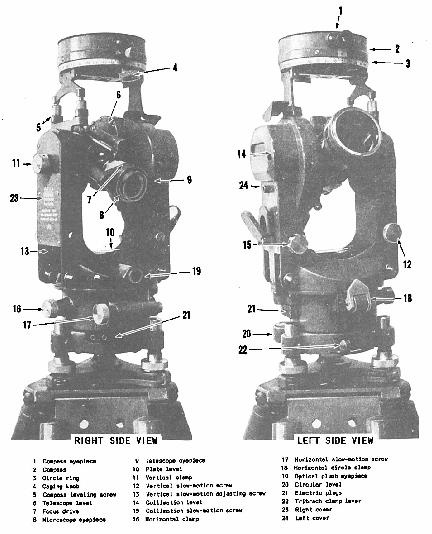 shown in figure 11-13. The TELESCOPE LEVEL,  mounted below  the telescope, uses a

prism system and a 450 mirror for leveling operations. When the telescope is plunged to the reverse position, the level assembly is brought to the top.

TELESCOPE.- The telescope of a theodolite can be rotated around the horizontal axis for direct and reverse readings. It is a 28-power instrument with the shortest focusing distance of about 1.4 meters. The cross wires are focused by turning the eyepiece; the image, by turning the focusing ring. The reticle (fig. 11-14) has horizontal and vertical cross wires, a set of vertical and horizontal ticks (at a stadia ratio of 1:100), and a solar circle on the reticle for

making solar observations. This circle covers 31 min of arc and can be imposed on the sun's image (32 min of arc) to make the pointing refer to the sun'scenter. One-half of the vertical

line is split for finer centering on small distant objects. 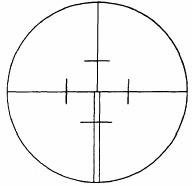 The telescope of the theodolite is an inverted image type. Its cross wires can be illuminated by either sunlight reflected by mirrors or by battery source. The amount of illumination for the telescope can be adjusted by changing the position of the illumination mirror.

TRIBRACH.- The tribrach assembly (fig. 11-15), found on most makes and models, is a detachable part of the theodolite that contains the leveling screw, the circular level, and the optical plumbing device. A locking device holds the alidade and the tribrach together and permits interchanging of instruments without moving

the tripod. In a "leapfrog" method, the instrument (alidade) is detached after observations are completed. It is then moved to the next station and another tribrach. This procedure reduces the amount of instrument setup time by half.

CIRCLES.- The theodolite circles are read through an optical microscope. The eyepiece is located to the right of the telescope in the direct position, and to the left, in the reverse. The microscope consists of a series of lenses and prisms that bring both the horizontal and the 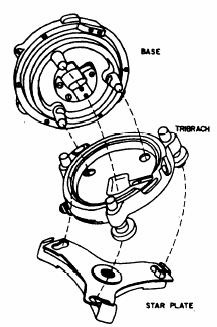 vertical circle images into a single field of view. In the DEGREE-GRADUATED SCALES (fig. 11-16), the images of both circles are shown as they would appear through the microscope of the 1-min theodolite. Both circles are graduated from 0 o to 360 o with an index graduation for each degree on the main scales. This scale'sgraduation appears to be superimposed over an auxiliary that is graduated in minutes to cover a span of 60 min (1 o ). The position of the degree mark on the auxiliary scale is used as an index to get a direct reading in degrees and minutes. If necessary, these scales can be interpolated to the nearest 0.2 min of arc.

The vertical circle reads 0 o when the theodolite'stelescope is pointed at the zenith, and 180 o

when it is pointed straight down. A level line reads 90 o in the direct position and 2700 in the reverse. The values read from the vertical circle are referred to as ZENITH DISTANCES and not vertical angles. Figure 11-17 shows how these zenith distances can be converted into vertical angles. 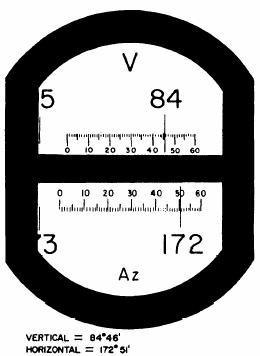 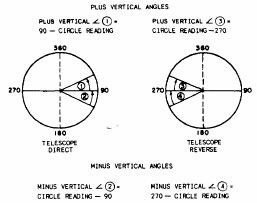 In the MIL-GRADUATED SCALES (fig. 11-18), the images of both circles are shown as they would appear through the reading micro-scope of the 0.2-mil theodolite. Both circles are graduated from 0 to 6,400 mils. The main scales are marked and numbered every 10 mils, with the 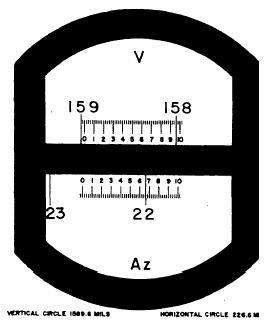 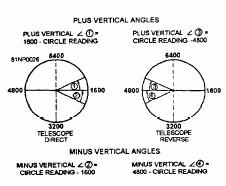 last zero dropped. The auxiliary scales are graduated from 0 to 10 roils in 0.2-mil increments. Readings on the auxiliary scale can be interpolated to 0.1 mil. The vertical circle reads 0 mil when the telescope is pointed at the zenith, and 3,200 mils when it is pointed straight down. A level line reads 1,600 roils in the direct position and 4,800 roils in the reverse. The values read are zenith distances. These zenith distances can be converted into vertical angles as shown in figure 11-1

The excavation of material in underwater areas is called dredging, and a dredge is an excavator afloat on a barge. A dredge may get itself into position by cross bearings, taken from the dredge on objects of known location on the beach, or by some other piloting method. Many times, however, dredges are positioned by survey triangulation. The method of determining direction angles from base line control points is the same as that just described.