In addition to developing the test cases, supporting code must be developed to exercise each unit and to connect it to the outside world.

In addition to developing the test cases, supporting code must be developed to exercise each unit and to connect it to the outside world. Since the tester is considering a stand-alone function/procedure/class, rather than a complete system, code will be needed to call the target unit, and also to represent modules that are called by the target unit. This code called the test harness, is developed especially for test and is in addition to the code that composes the system under development. The role is of the test harness is shown in Figure 6.5 and it is defined as follows:

The auxiliary code developed to support testing of units and components is called a test harness. The harness consists of drivers that call the target code and stubs that represent modules it calls. 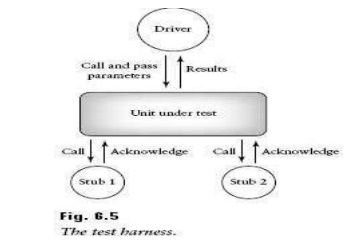 tested themselves to insure they are working properly and that they are reusable for subsequent releases of the software. Drivers and stubs can be developed at several levels of functionality. For example, a driver could have the following options and combinations of options:

(i) call the target unit;

(ii)  do 1, and pass inputs parameters from a table;

The stubs could also exhibit different levels of functionality. For example a stub could:

(i) display a message that it has been called by the target unit;

(ii)  do 1, and display any input parameters passed from the target unit;

Drivers and stubs as shown in Figure 6.5 are developed as procedures and functions for traditional imperative-language based systems. For object-oriented systems, developing drivers and stubs often means the design and implementation of special classes to perform the required testing tasks. The test harness itself may be a hierarchy of classes. For example, in Figure 6.5 the driver for a procedural system may be designed as a single procedure or main module to call the unit under test; however, in an object-oriented system it may consist of several test classes to emulate all the classes that call for services in the class under test. Researchers such as Rangaraajan and Chen have developed tools that generate test cases using several different approaches, and classes

The test planner must realize that, the higher the degree of functionally for the harness, the more resources it will require to design, implement, and test. Developers/testers will have to decide