Unit tests can begin when (i) the units becomes available from the developers (an estimation of availability is part of the test plan), (ii) the test cases have been designed and reviewed, and (iii) the test harness, and any other supplemental supporting tools, are available.

Unit tests can begin when (i) the units becomes available from the developers (an estimation of availability is part of the test plan), (ii) the test cases have been designed and reviewed, and (iii) the test harness, and any other supplemental supporting tools, are available. The testers then proceed to run the tests and record results. Chapter 7 will describe documents called test logs that can be used to record the results of specific tests. The status of the test efforts for a unit, and a summary of the test results, could be recorded in a simple format such as shown in Table 6.1. These forms can be included in the test summary report, and are of value at the weekly status meetings that are often used to monitor test progress. It is very important for the tester at any level of testing to carefully record, review, and check test results. The tester must determine from the results whether the unit has passed or failed the test. If the test is failed, the nature of the problem should be recorded in what is sometimes called a test incident report (see Chapter 7). Differences from expected behavior should be described in detail. This gives clues to the developers to help them locate any faults. During testing the tester may determine that additional tests are required. For example, a tester may observe that a particular coverage goal has not been achieved. The test set will have to be augmented and the test plan documents should reflect these changes. When a unit fails a test there may be several reasons for the failure. The most likely reason for the failure is a fault in the unit implementation (the code). Other likely causes that need to be carefully investigated by the tester are the following:

• a fault in the test case specification (the input or the output was not specified correctly);

• a fault in test procedure execution (the test should be rerun);

• a fault in the test environment (perhaps a database was not set up properly);

•   a fault in the unit design (the code correctly adheres to the design specification, but the latter is incorrect). 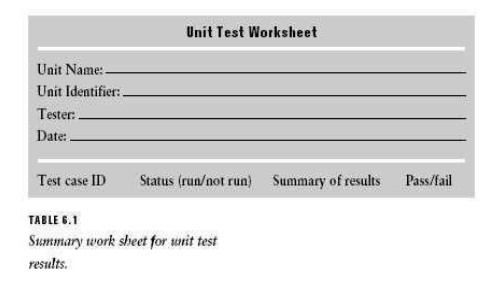 The causes of the failure should be recorded in a test summary report, which is a summary of testing activities for all the units covered by the unit test plan.

Ideally, when a unit has been completely tested and finally passes all of the required tests it is ready for integration. Under some circumstances unit may be given a conditional acceptance for integration test. This may occur when the unit fails some tests, but the impact of the failure is not significant with respect to its ability to function in a subsystem, and the availability of a unit is critical for integration test to proceed on schedule. This a risky procedure and testers should evaluate the risks involved. Units with a conditional pass must eventually be repaired. When testing of the units is complete, a test summary report should be prepared. This is a valuable document for the groups responsible for integration and system tests. It is also a valuable component of the project history. Its value lies in the useful data it provides for test process improvement and defect prevention. Finally, the tester should insure that the test cases, test procedures, and test harnesses are preserved for future reuse.