The liver - Structure and Function of Digestive System 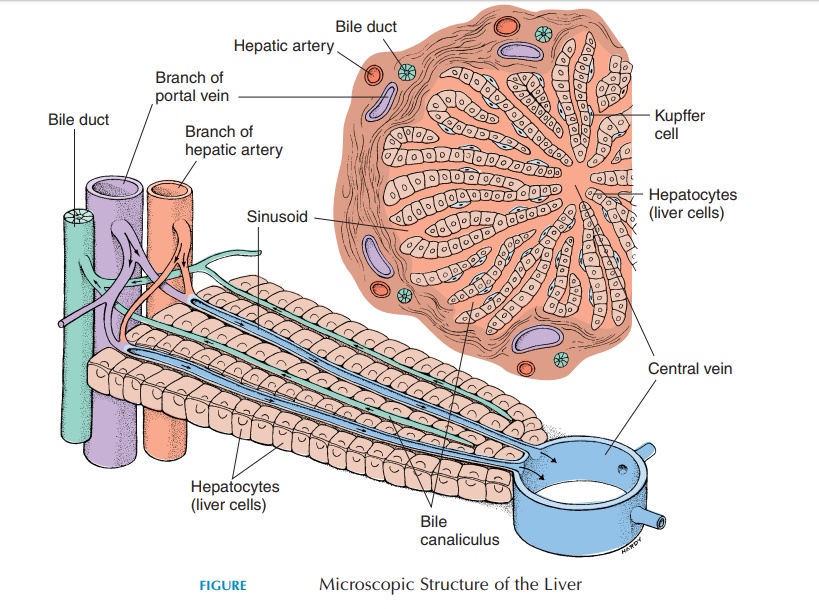 The liver (Figure 11. 9) is the largest organ in the abdomen.

The liver (Figure 11. 9) is the largest organ in the abdomen. It is reddish brown and has a firm consistency. The liver is located in the right upper quadrant of the abdomen, occupying the right hypochondriac, epigastric, and umbilical regions and part of the left hypochondriac. It lies directly below the diaphragm.

The liver is covered by a tough connective tissue cap-sule over which is the peritoneum. 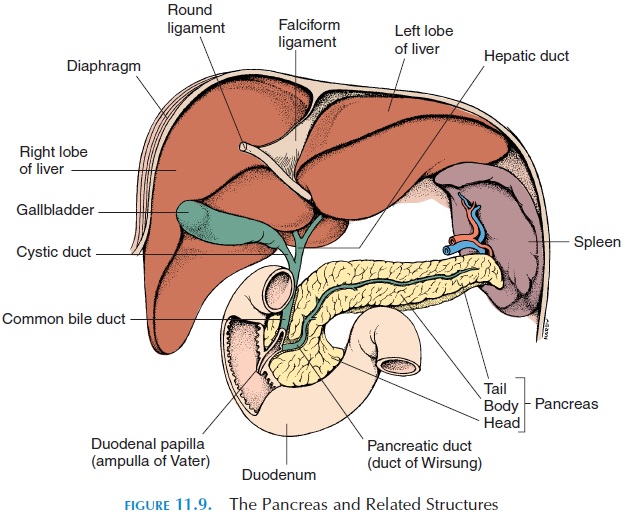 Unique Blood Supply to the Liver

The liver receives one third of its blood supply via the hepatic artery (see Figure ••), whose blood is derived from the aorta. The remaining two thirds comes from the hepatic portal vein, which drains blood from the esophagus, stomach, spleen, small intestine, and most of the large intestine. In this way, nutrients ab-sorbed from the gut are processed by the liver before they enter the general circulation. After processing in the liver, the blood enters the inferior vena cava via the hepatic vein.

An Overview of the Microscopic Structure of the Liver

The liver is made up of specialized cells called hepato-cytes. These cells are arranged in single file similar tothe spokes of a wheel (see Figure 11.10). At the center of the wheel is the central vein, which joins other cen-tral veins to form the hepatic vein. In the periphery of the wheel, are the blood vessels and ducts for bile. The blood vessels, branches of the hepatic artery (contain-ing oxygenated blood from the aorta) and the hepaticportal vein (containing blood from the gut, rich in nu-trients), open into sinusoids (large blood vessels) be-tween the line of hepatocytes. The sinusoids run parallel to the hepatocytes and open into the central vein. 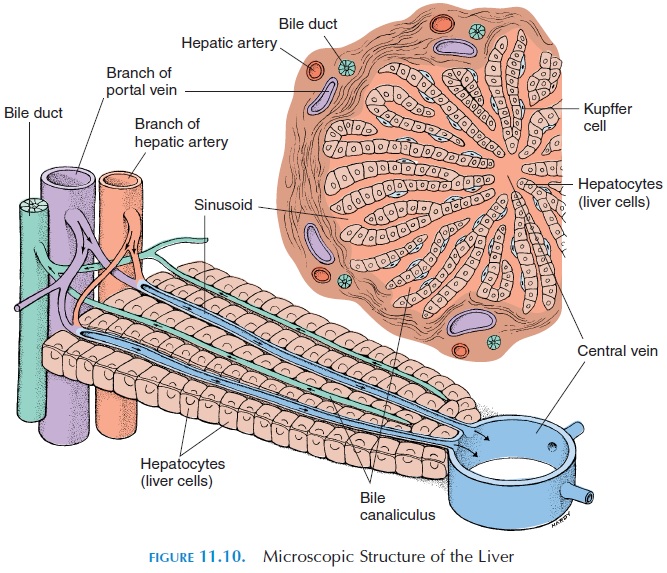 Other cells, Kupffer cells, are located in the walls of the sinusoids. Kupffer cells are actually macrophages (white blood cells), which destroy microorganisms that may have entered the blood through the gut.

Tiny channels that carry bile are found between the hepatocytes, along the spokes of the wheel. These channels open into the bile ductules located in the pe-riphery of the wheel. The bile ductules ultimately form the common hepatic duct that leaves the liver to join the duct from the gallbladder (cystic duct). The cystic duct and common hepatic duct join to form the com-mon bile duct, which opens into the duodenum.

From this description, it can be understood that the liver has an efficient architecture to fulfill its many functions.

Physiology textbooks state that the liver has more than 200 different functions. The most important functions are discussed here. The liver is arranged in such a way that it can screen the blood going into the systemic circulation and adjust the levels of various substances in the blood.

Effect on proteins: Amino acids absorbed fromthe gut may be stored in the liver for conversion into lipids, carbohydrates, or proteins. When needed, they are broken down. Ammonia is formed when amino acids are broken down. The liver converts the ammo-nia into urea, which is later excreted by the kidneys.

The liver manufactures most of the plasma pro-teins such as albumin, proteins required for the clot-ting process, and proteins used as transport vehicles in the blood. The liver also removes antibodies from the blood.

Removal of waste products: The liver detoxifiestoxins and drugs. Many drugs are rapidly converted to ineffective forms by the liver. That is why certain drugs must be given in larger quantities and in fre-quent doses. Conversely, dosage must be reduced in liver failure.

Removal of pathogens: The Kupffer cells, whichare fixed macrophages, remove pathogens and old and damaged blood cells. The breakdown product of hemoglobin (from red blood cells) —bilirubin—is re- moved from the blood and secreted into the bile for disposal.

Removal of circulating hormones: The liver is im-portant role for removing hormones that circulate in the blood, such as epinephrine, norepinephrine, thy-roid hormones, corticosteroids, and sex hormones.

Formation of vitamin D: One important functionof the liver is to convert a precursor of vitamin D that is manufactured in the skin or absorbed in the gut into an intermediary product that can be acted upon by the kidney. The kidney is the organ that finally forms vitamin D—one of the hormones that regulates calcium levels in the blood .

Storage of vitamins: The liver stores many vita-mins, especially vitamin B12 and the fat-soluble vita-mins, A, D, E, and K.

Bile synthesis: The liver manufactures bile, thesecretion vital for fat digestion and absorption. Bile is a yellow liquid that is mostly water. The most impor-tant component of bile is bile salts.

Because fat in the diet is not water-soluble, it coa-lesces to form large drops of fat in the gut. This makes it difficult for the enzymes secreted by the pancreas to act on the fat located deep inside the drop. The bile salts break the large drops into smaller ones, making it easier for the enzymes to act. In ad-dition, the bile salts facilitate the action of the en-zymes and help with the absorption of lipids through the mucosa into the body. Most bile salts that enter the gut via the bile duct are reabsorbed into the cir-culation and recycled by the liver.

Other than bile salts, bile also contains the bilepigment bilirubin, which is a breakdown product ofhemoglobin.