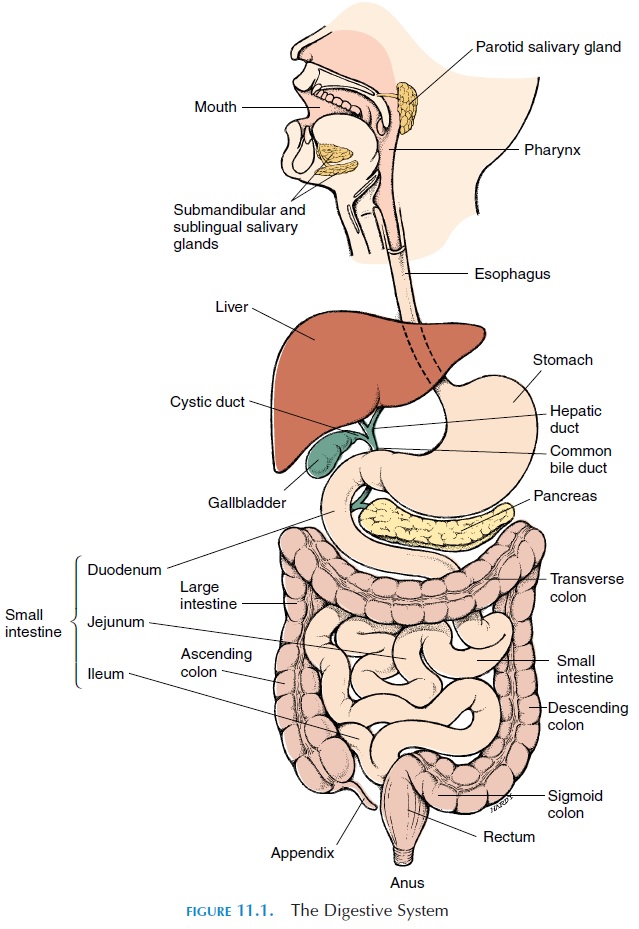 The first part of the intestine—the cecum—has a small wormlike projection from the posteromedial side, the vermiform appendix. The appendix is about 7.5–15 cm (3–6 in) long, with a variable size and shape. It contains a large amount of lymphoid tissue. In hu-mans, it does not have an important function. Occa-sionally, the appendix becomes inflamed and produces the typical symptoms of appendicitis.

The feces contain inorganic material, undigested plant fibers, bacteria, and water. Surprisingly, a large fraction of the feces is of nondietary origin. Of the fe-ces, 75% is water and 25% is solids. Of the total solids, bacteria forms 30%; inorganic material, such as calcium and phosphate, 15%; fat and fat deriva-tives, 5%; and a variable amount of cellulose and in-digestible fiber, mucus, and mucosal cells that have sloughed off from the wall of the gut.

Although the jejunum contains little or no bacteria, the colon contains large numbers of bacteria. The bacteria in the colon are beneficial because many of them manufacture such vitamins as vitamin K and B complex. Chemicals formed by intestinal bacteria are largely responsible for the odor of the feces. Some bacteria residing in the intestine are harmful and may invade the body when the immunity is particu-larly low.

Plant materials that reach the large intestine rela-tively unchanged are known as dietary fibers. Fibers are important to increase the bulk of the feces that is required to stretch the walls of the colon and initiate defecation. It has been shown that an intake of large amounts of vegetable fiber decreases the incidence of colon cancer, diabetes mellitus, and some types of heart diseases.