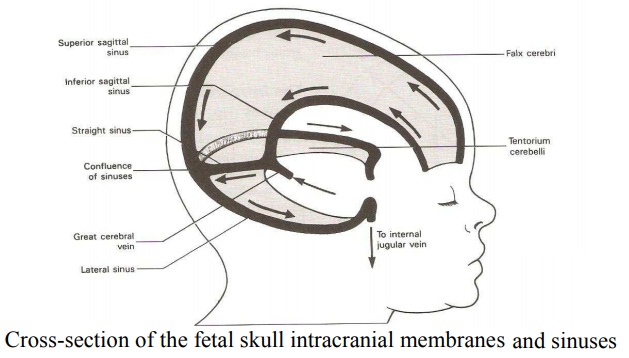 The skull contains delicate membranous structure which is liable to damage during delivery especially if subjected to abnormal molding. Structures include: 1. Folds of Dura matter and 2. Venous sinuses associated with them.

The intracranial membranes and sinuses

The skull contains delicate membranous structure which is liable to damage during delivery especially if subjected to abnormal molding. Structures include:

1.           The Falx Cerebri: It is a sickle-shaped fold of membranewhich dip down between the two cerebral hemispheres. It runs beneath the frontal and sagittal sutures – (Fr om root of the nose to the internal occipital protuberance).

2.           Tentorium Cerebelli: This is a horizontal fold of duramatter situated at the posterior part of the cranial cavity. It lies at right angle to the falx cerebri. It has a horse – shoe shape and forms a tent-like layer between the cerebrum and the cerebellum. It contains large blood vessels or sinus which drains blood from the brain on their way to become the jugular vein of the neck.

3.           The superior Longitudinal(Sagittal) Sinus: it runs alongthe upper part of the falx corebri from front to the back (from root of the nose to the internal occipital protuberance)

6.           The Great Cerebral vein of Galen: meet the inferiorSagittal Sinus at the inner end of the junction and where the falx joins the tentorium.

7.           Lateral Sinuses: These are two in number they pass from theconfluence of the sinuses along the outer edge of the tentorum cerebelli and carries blood to the internal jugular veins.

During monlding the falx and the tentorium are stretched. The tentorium is most vulnerable to tear near its attachment to the falx – (Tentorial Tears), this leads to bleeding from th e great cerebral vain giving rise to intracranial hemorrhage.