Part of the fetal skull 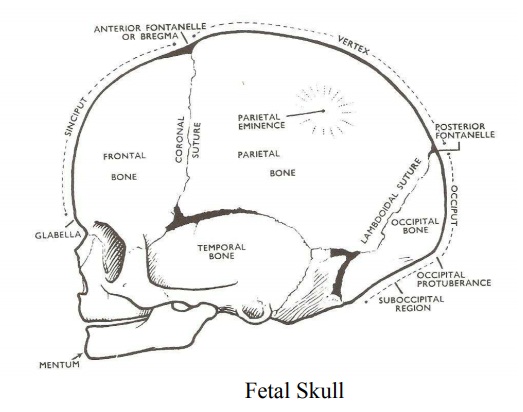 The bones of the skull develop from membranes, ossification starts as early as the 5th week following conception.

The bones of the skull develop from membranes, ossification starts as early as the 5th week following conception. At term ossification is almost complete except for the thin lines of membranes separating the bones from each other known as the sutures. Ossification of the skull is not complete until early adulthood.

The part of the fetal skull

1. The vault: Is from the line from the nape of the neckto the orbital ridge. The vault is made up of 5 bones and two enter into the lateral wall. These are:

2 Temporal bones and the wings of the sphenoid bones form the side wall of the skull.

2. The face: This area extends from the orbital ridge tothe junction of the neck with the chin. It is composed of 14 fused bones.

3. The base: These bones are also firmly united and helpto protect the brain.

These are membranous lines found at the junction between the bones of the vault. There are four important sutures on the vault where ossification has not been completed.

The Frontal Suture: Separates the two frontal bones, itextends from the root of the nose to the bregma.

The Coronal Suture: Separates the frontal and the parietalbones.

Others are the sutures that separate the parietal bones from the temporal bones.

Fontanelles are formed where two or more sutures meet between the bones. There are 6 sutures on the vault but only two are of importance. These are:

Anterior Fontanelle (or bregma): Formed at the junctionof the Sagittal, Fontal, and coronal sutures. It is a diamond shaped membranous space. It has four angles which correspond with the entry of each suture. It is about 3-4cm long and 1.5cm wide. It is a valuable aid in vaginal examination to determining the position. Cerebral pulsation can be felt through it and it is a guide to baby’s health – It bulges in brain infection or increase p ressure and depressed in dehydration. Closes 18-24months after birth.

The Posterior fontanell – (lambda): Formed at thejunction of the sagittal and lambdoidal sutures. It is a small triangular membranous space. It is felt on vaginal examination during labour in a well flexed head. It closes at 6 weeks after birth.

6. The region of the fetal skull

Glabella – is the bridge of the nose, between the e yebrows. 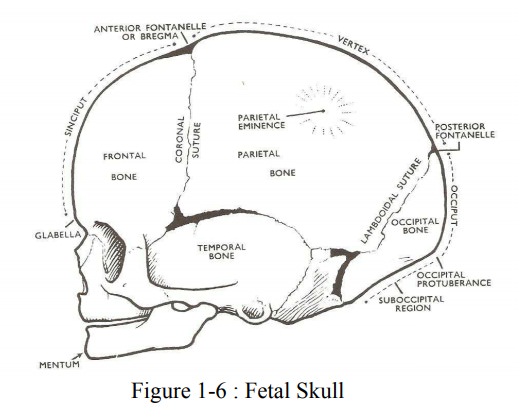