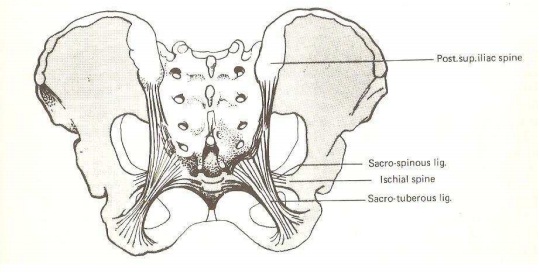 The bony pelvis form the bony canal through which the fetus must pass during the normal birth process.

The bony pelvis form the bony canal through which the fetus must pass during the normal birth process. If the canal is of the normal shape, and size, the baby of the normal size will negotiate it without difficulties,because pelvis vary in size and shape it is important that the midwife recognizes the normal pelvis so as to be able to detect deviation from the normal. One of the ways of estimating the progress of labor is by assessing the relationship of the fetus to certain pelvic landmarks. 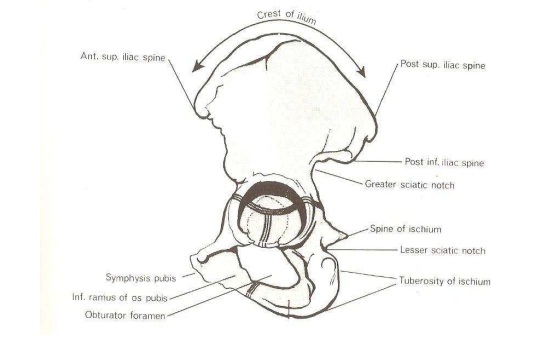 InnominateBones: each innominate bone is composed of three parts - the ilium, ischium and the pubis

Sacrum is a wedge shaped bone consisting of five fused vertebrae. Upper border of the first sacral vertebral juts forward, known as SacralPromontory which is the most importantlandmark in the female pelvis. Anterior surface is concave, referred to as Hollow ofthe Sacrum. Lateral sacrum extends into a wing or ala. Posterior surface is roughened toreceive attachment of muscles. Two pairs of holes, or foramina, pierce the sacrum through which, nerve from the cauda equina emerge to supply pelvic organs.

Coccyx is a vestigial tail. It consists of four fused vertebrae forming a small triangular bone. The coccyx bends backwards at this joint during parturition to increase the anterior posterior diameter of the pelvic outlet.

·              Two (right and left) sacroiliac joints – is the strongest joint in the body articulates sacrum to ilium. Normally there are little or no movements in these joints, but during pregnancy especially towards the end there is a certain degree of movement due to the relaxation of the ligaments of the joints. This may give rise to difficulties in walking and backache, especially the multiparous women. There is little widening during labour , commonly referred to as “give” of the pelvis. 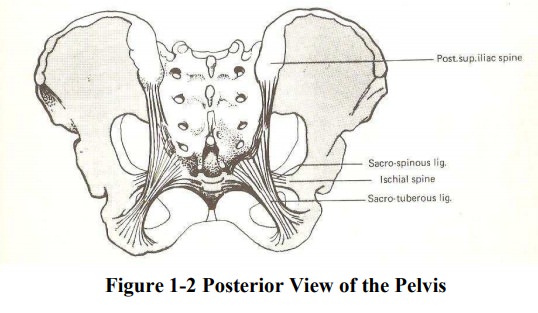 Division of the Pelvis

The pelvis is divided into two parts, the true and the false pelvis. The false is the part above the brim. It has little importance in obstetrics

The true pelvis is the bony canal through whichfetus must pass during birth. It consists of brim, cavity and outlet. Brim is round except where sacral promontory projects into it. Commencing posteriorly the pelvic brim includes the following important landmarks.

Diameters of the pelvis

Diameters of the brim

·              Antero-posterior diameter – from sacral promontory to upper most border of symphysis pubis 12cm. A measurement to the posterior border of the upper surface to a point 1.25cm lower is called the obstetrical conjugate, 11cm. It is the available space for the passage of the fetus hence it is called the true conjugate

·              Diagonal conjugate is anteroposterior diameter from the lower border of the symphysis pubis to the centre of the sacral promontory measured vaginally for pelvic assessment 12-13 cm.

·              Oblique diameter – from sacroiliac joint to the iliopectineal eminence on the opposite side (right and left). It measures 12cm

·              The pelvic cavity extends from the pelvic brim above to the outlet below. Anterior wall is formed by pubic bones and symphysis pubis - depth is 4cm. The cavity is circular in shape and is considered to be 12cm all round.

Diameter of the outlet:

There are two Pelvic outlets: described as Anatomical Outlet and Obstetrical Outlet. Theanteroposterior diameter of outlet – from the lower border of the symphysis pubis to the sacrococcygeal joints 13cm

Pelvic planes these are imaginary flat surfacesat the brim, cavity and outlet of the pelvic canal. The fetus will enter at right angle to the plane according to the inclination. 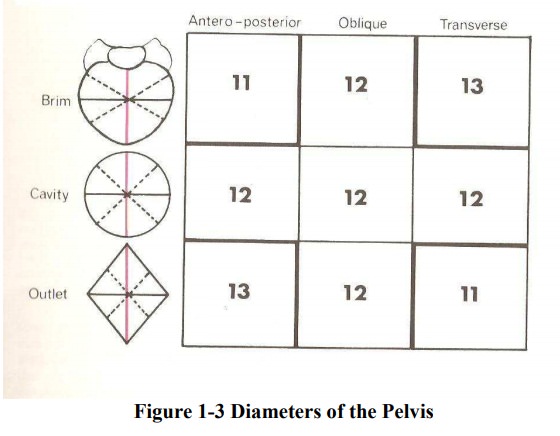 ·              Anthropoid pelvis – has long oval brim in which anteroposterior diameter is longer than transverse diameters. Labor does not present any difficulties but favors occipitoanterior or occipitoposterior positions 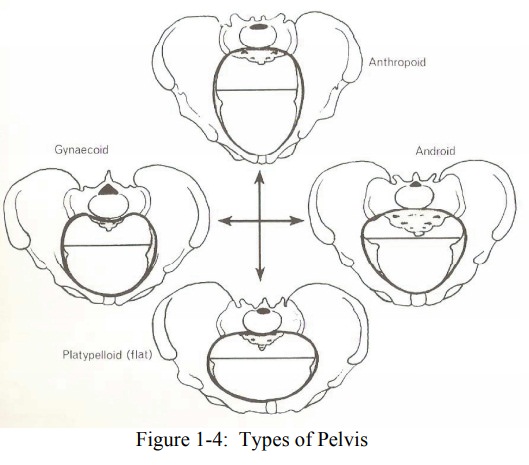 Comparison of Male and Female Pelvis 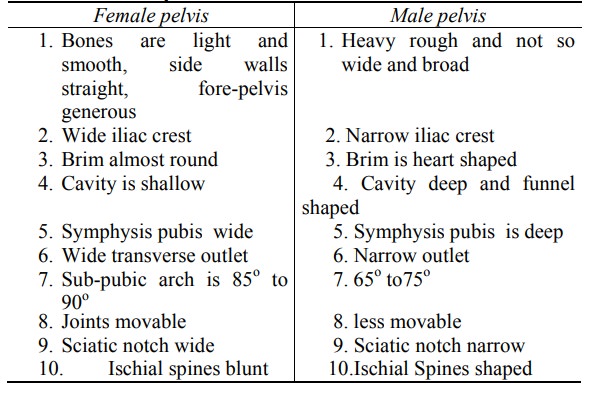