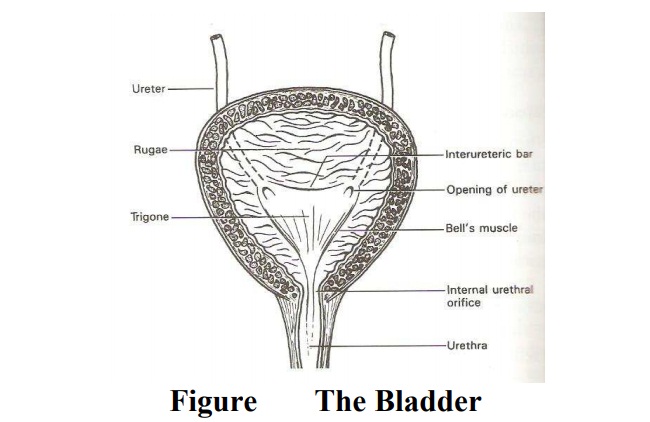 The bladder lies in the true pelvis, just behind the symphysis pubis and in front of the vagina and the uterus.

The uterus rests partially over it due to its anterverted and ante flexed position. The intestines and the position cavity also lie above it. The ureters enter from behind and the urethra leaves below. It is supported by the pelvic floor muscles it may become abdominal organ when full and during pregnancy and labor.

It is pyramidal in shape when empty but when full it becomes more globular in shape as the walls become distended.

When empty, its size is similar to that of the uterus but becomes larger when full. The bladder can hold up to 600mls of urine. During pregnancy it can hold more (under the influence of pregnancy hormone). The bladder is an important organ in midwifery because of its close relationship to the uterus.

The bladder is a hollow muscular organ capable of distension. The anterior part lies close to the symphysis pubis and it is known as the apex. It has a trigone where urine collects. From the apex, the urachus ligament runs up to the anterior abdominal wall to the umbilicus.

The wall of the bladder excluding the trigone is made up of the following structures.

1.           Transitional Epithelium- This lies the cavity of the bladder. It is arranged in folds known as rugae except over the trigone, to allow for distension as it expands and fill up with urine.

2.           Connective Tissue- This lies beneath the epithelium. It carries blood, lymphatic vessels and nerves.

3.           Muscle Layer: It is known as the destrusor muscle, whose function is to expel urine. It is made up of three coats.

The circular fiber is thickly arranged around the internal meatus to form the internal urethral sphincter of the bladder. It is always in a state of contraction except during micturation.

4.           Peritoneum: Covers the upper surface while the remaining surface is invested with visceral pelvic fascia.

5.           The Tri-Gone: The tri-gone is situated at the back of the bladder. It is triangular in shape with its base behind and the apex in front. Each side measures 2.5cm in length. It has three openings which correspond with the angles. Two ureteric orifices where the ureters enter and the third is the exit of the urethra. The apex of the trigone is the bladder neck. The trigone is made up of special muscles.

Intermesentric Bar (Mercier’s bar)- This lies between the ureteric orifices

Muscles of bell- These extend from the ureteric orifice to the internal urethral orifice. 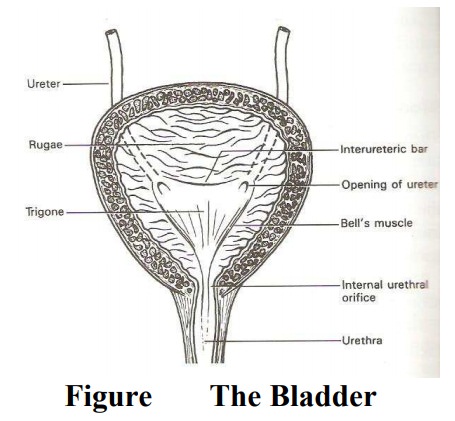 ·              Urachus Ligament: A fibrous band that extends from the apex of the bladder to the umbilicus.

Posteriorly- Upper half of the vagina and the cervix.

Inferiorly- Urethra, lower half of the anterior vaginal wall.