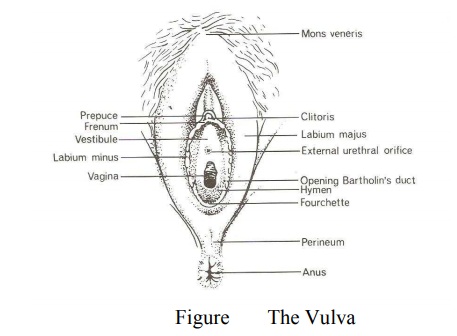 The term ‘vulva’ applies to the external female gen ital organs. It consists of the following structures:

The mons veneris (‘mount of venus’) or mons pubis.This is a pad of fat lying over the symphysis pubis. It is covered with pubic hair from the time of puberty.

The labia majora (‘greater lip’).Theses are two foldsof fat and areolar tissue covered with skin and pubic hair on the outer surface. They arise in the mons veneris and merge into the perineum behind

The labia minora (‘lesser lip’) these are two thin foldsof skin lying between the labia majora. Anteriorly they divide to enclose the clitoris; posteriorly they fuse, forming the fourchette.

The clitoris This is a small rudimentary organcorresponding to the male penis. It is extremely sensitive and highly vascular and plays a part in the orgasm of sexual intercourse.

The vaginal orifice.This is also known as the introitusof the vagina and occupies the posterior two thirds of the vestibule. The orifice is partially closed by the hymen, a thin membrane that tears during the first sexual intercourse or during the birth of the first child. The remaining tags of hymen are known as the ‘carunculae myrtiformes’ because they are thought t o resemble the myrtle berries.

Bartholin’s glands there are two small glands thatopen on either side of the vaginal orifice and lie in the posterior part of the labia majora. They secrete mucus which lubricates the vaginal opening

The perineum is the area extending from the fourchette to the anus, and forms the base of the perineal body – a triangular mass of connective tissue, muscle, fat, measuring 4cm X 4cm. The perineal body fills the wedge shaped area between the lower ends of the rectum and vagina, and forms a central attachment for the muscles and fascia of pelvic floor. When, during the second stage of labor the perineal body is flattened out by the descending fetal head, the perineum elongates and becomes so thin that it is liable to tear.

This comes from the internal and external pudendal arteries. The blood drains through corresponding veins

This is mainly via the inguinal glands

This is derived from branches of pudendal nerve. The vaginal nerves supply the erectile tissue of the vestibular bulbs and clitoris and their parasympathetic fibers have a vasodilator effect. 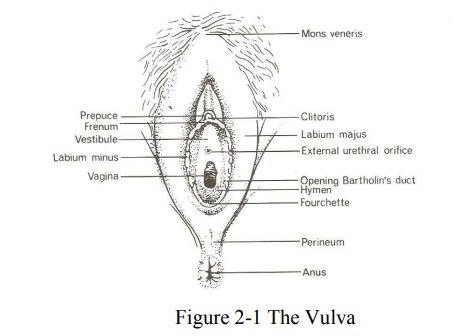