The reproductive phase of a women’s life begins at puberty until menopause and it is associated with regular menstrual flow.

The reproductive phase of a women’s life begins at puberty until menopause and it is associated with regular menstrual flow. The onset of the first menstrual period marks sexual maturity and is known as menache. It signals the beginning of series of periodically recurrent changes in the hormonal status of the female, which causes build up and shedding of the endometrium Menache usually occurs between the ages 10 -16. Menstruation occurs once a month, averagely it is taken to be every 28 days and recurs regularly from puberty until menopause, though the length may vary with individuals, counting from day 1 of the menses. The flow last about 3-5 days with approximately 50 -100mls of blood. Menstruation is in two cycles.

During the follicular phase, FSH stimulate the primodial follicles in the ovary, which respond by secreting oestrogen. (This prepares the uterine lining for arrival and implantation of the ovum).

The ovarian cortex contains about 200,000 primordial follicles at birth. The later become graafian follides. From puberty onwards certain follicles enlarge and one matures each month to librate an ovum.

The increasing level of oestrogen signals the hypothalamus to stop producing FSH, hence progesterone surge takes place which results in production of LH. This enhances the maturation of the follicles which causes rupture of the follicle on the 14th day results in ovulation.

This is followed by the luteal phase which begins with ovulation and ends with the start of the menstrual flow. The ruptured follicle continue to produce LH, it becomes, yellowish, increases in size to form the corpus Luteum (Yellow body). Progesterone level remains high. If the ovum is not fertilized by 48 hrs the hormonal levels drop and the endometrium begins to shed, this signals menstrual flow. However if fertilization takes place, the corpus luteum continue to secrete progesterone and oestrogen which maintain the endometrium until the placenta takes over. 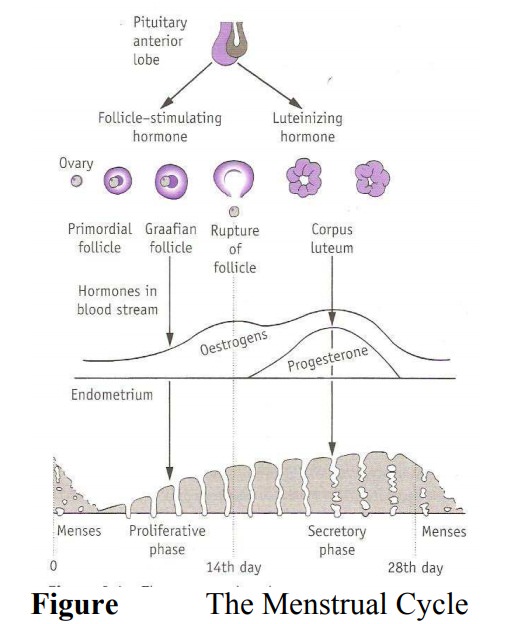 Menstrual cycle is described in phases.

This phase begins immediately the menstruation stops. The first 2-3 days is a stage of repair of the endometrium sometimes referred to as RegenerativePhase, during this stage new endometrium is reformed. Proliferature phase last until ovulation. The endometrium is ready to received ovum. It is under the control of hormone, there is ripening of the granfian follicles which secrete oestrogen in large quantity, under the influence of the FSH from the anterior pituitary gland. The next level get to a peak it inhibit production of FSH. At the same time one graafian follicle would have mature and moves to the surface of the ovary. It bursts and discharges an ovum. This process is known as Ovulation, and takes place about the 14 days before the next menses. As ovulation approaches, rising oestrogen level causes the cervical mucus to become thin, clear and elastic, this elasticity (spinnbarkheit) enhances the sperms motility and increases the female’s fertility.

Secretory Phase: This follows ovulation and is underthe influence of progesterone and oestrogen. Increase in the progesterone level and development of corpus luteum further increases thickening of the endometrium and become softer. The lining become more vascular and ready to received fertilized ovum – layer increases to 3.5mm. If fertilization and implantation occurs, progesterone level continues to increase. This inhibits the maturation of another follicle. When the level of progesterone reaches it’s peak and no fertilized ovum, production of LH is inhibited. The corpus luleum degenerates and atrophies resulting in sudden drop in the progesterone level which brings about menstrual flow as a reaction to shrinking and shedding from the uterine wall.

Menstrual Phase: This phase is characterized by uterinebleeding and shedding of the endometrial lining. After 14 days of corpus luteum and no fertilization result in sudden drop of progesterone and oestrogen, the functioning layer is shed off with the epithelial layer and expelled by the muscular contraction of the uterine muscle. This tissues plus bleeding from the ruptured blood vessels form the menstrual flow. It last for about 3-5 days. Total blood loss 50-100 mls. The fibrinolysis present in the blood prevents clotting.

The contents of menstrual blood are endometrial lining, blood from capillaries mucus and dead ovum. Regularity of menses depends on hormonal changes associated with ovulation, which are under the influence of changes in the anterior pituitary gland and some emotional factors. The life span of the ovum is 24-48hrs. Women are in the most fertile state about 14 days before the next menses. The secretary phase is more or less constant in length but the proliferative and menstrual phases may vary.

Some women experience little or no discomfort during menstrual cycle while some experience full blown premenstrual syndrome (PMS) which may occur several days before the onset and last a few days after. Slight pelvic pain may accompany ovulation, known as Mittlschemer’s syndrome, which may be due to stretching ofthe ovarian capsule, slight bleeding into the peritorieal cavity or peristalsis in the fallopian tubes – char acterized by the following.

1.           Headache, bloating, largely brought about by relaxation of smooth muscle caused by progesterone.

3.           Tenderness and swelling of the breasts nipples fluids on the breast.