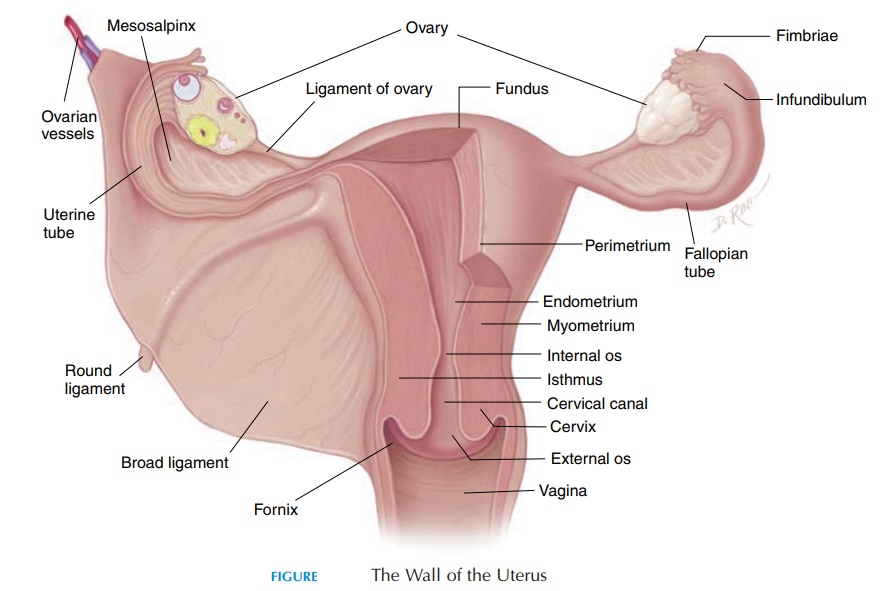 The nonpregnant uterus (see Figure 7.6) is a pear-shaped organ about 7.5 cm (3 in) long and 5 cm (2 in) wide (at the widest diameter). It lies suspended be-tween the urinary bladder anteriorly and the rectum posteriorly. The upper portion of the uterus is nor-mally bent forward (anteflexed), lying over the supe-rior and posterior aspect of the urinary bladder. Part of the superior portion of the uterus is covered by the peritoneum. 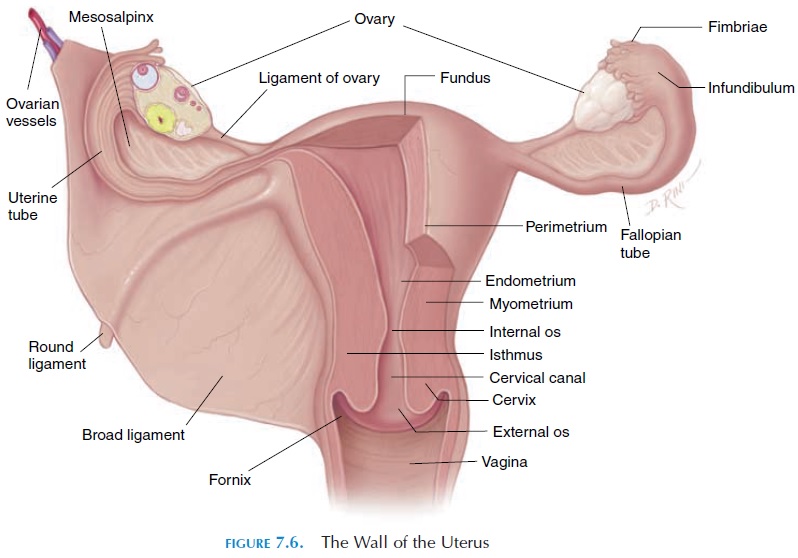 The uterus has a thick, muscular wall, consisting of three layers. The outer layer is the perimetrium, which is actually part of the peritoneum covering the superior aspect. Deep to the perimetrium is the mus-cular myometrium. The third and innermost layer is the endometrium, a glandular mucosa lining the uterine cavity. The myometrium consists of smooth muscle arranged in longitudinal, oblique, and circu-lar layers. It forms 90% of the uterine wall and is re-sponsible for the powerful contractions that occur at the time of labor. The endometrium is the inner lin-ing that undergoes cyclical changes influenced by hormones. It has an abundant blood supply and numerous glands that help support the growing fetus at the time of pregnancy.

The uterine cavity is somewhat triangular in shape, with the base of the triangle located superiorly. The openings of the fallopian tubes are located in the two upper angles. The lower end of the cavity narrows to a portion known as the uterine isthmus. The isthmus is continuous with the opening of the cervix, which projects about 1.5 cm (0.6 in) into the vagina. The passage in the middle of the cervix is known as the cervical canal. The two ends of the cervical canal areknown as the internal (opens into the uterine cavity) and external os (opens into the vagina).

The uterus has an extensive blood supply. Blood is supplied by the uterine arteries, which are branches of the internal iliac arteries. The blood leaves the uterus via theuterine veins and drains into the in-ternal iliac veins.

Sensory nerves from the uterus reach the spinal cord at the T11 and T12 level. Hence, spinal nerves T10–L1 are targeted for anesthetic block (if neces-sary) during labor. The uterus is also supplied by both sympathetic and parasympathetic nerves; there- fore, the activities in the uterus are controlled by both nervous and endocrine systems.

The ovaries, uterine tubes and the uterus are held in place inside the abdomen by ligaments that connect them to the surrounding walls. 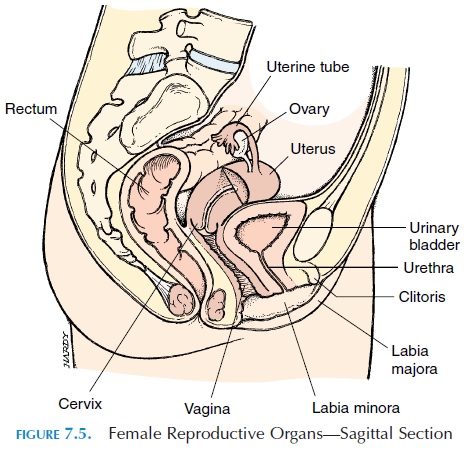