After puberty, the female reproductive system, unlike that of the male, undergoes cyclical changes that can be regarded as periodic preparation for fertilization and pregnancy.

After puberty, the female reproductive system, unlike that of the male, undergoes cyclical changes that can be regarded as periodic preparation for fertilization and pregnancy. This cyclical change is known as the menstrual cycle (see Figure 7.9). The most conspicu-ous of these changes is the vaginal bleeding that oc-curs with the shedding of part of the inner lining of the uterus (menstruation). The duration of the cycle is variable. Typically, the cycle lasts for 28 days, with day 1 denoted as the first day of menstruation and day 28 as the day before menstruation of the next cycle. 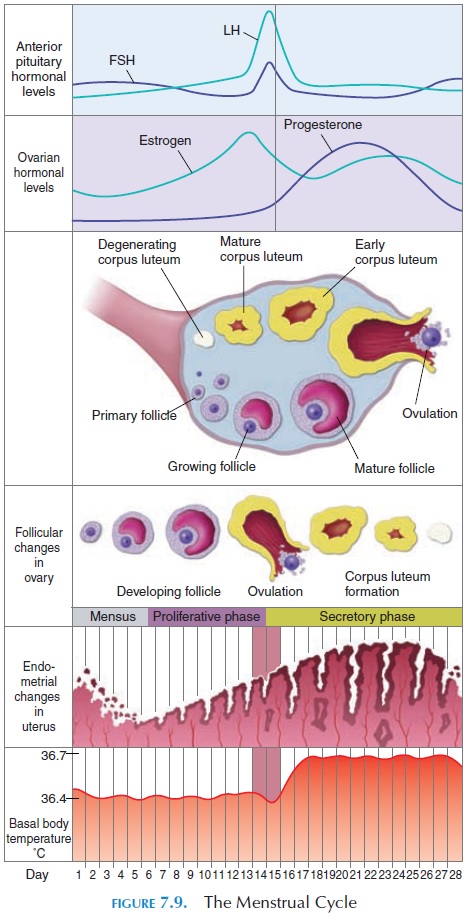 Although the menstrual cycle has effects throughout the body, only those changes occurring in the ovary, fal-lopian tube, uterus, vagina, and breast are described here. The changes in the cycle are a result of the ebb and surge of sex hormone levels in the plasma.

Ovarian Cycle and Fate of the Ova

At the beginning of every cycle, a cavity filled with fluid forms around the oocytes (primordial follicles) in the ovary (Figure 7.9). Soon, one of the follicles rapidly increases in size while the others regress. This is the dominant follicle. Certain cells in the follicle secrete the hormone estrogen. About 14 days before the start of the next cycle, the enlarged follicle ruptures and the ovum is extruded into the abdominal cavity. This process is known as ovulation. The ovum is picked up by the fimbriae of the uterine tubes and transported into the uterus. If fertilization occurs, the fertilized ovum embeds in the uterine cavity wall. If unfertilized, it is expelled from the uterus into the vagina and then outside the body at the time of menstruation.

After ovulation, the ruptured follicle in the ovary fills up with blood. The cells lining the follicle rapidly multiply and yellowish, lipid-rich cells known as the luteal cells replace the clotted blood. The follicle isnow known as the corpus luteum. The luteal cells se-crete the hormones estrogens and progesterone. If pregnancy occurs, the corpus luteum persists and menstruation does not occur until delivery as a result of continuous estrogen and progesterone secretion. If there is no pregnancy, the corpus luteum degenerates by about 12 days after ovulation and is eventually re-placed by scar tissue.

The phase from the 1st day of menstruation to the day of ovulation is known as the follicular or pre-ovulatory phase. Since follicular enlargement isbrought about by estrogen secretion, this phase is also known as the estrogenic phase.

After ovulation, as the remnants of the follicle are replaced by luteal cells, the rest of the menstrual cy-cle is known as the luteal phase. This phase is also known as theprogestational phase because of the high level of progesterone at this time.

Changes in the Uterus

At the beginning of the menstrual cycle, the uterine cavity has only the remnants of the deep layer of the endometrium. From the fifth to the fourteenth days, the endometrium rapidly increases in thickness, and the uterine glands lengthen. This phase of the cycle is referred to as the proliferative phase. After ovula-tion, the endometrium becomes highly vascularized. The glands coil and secrete a clear fluid. Hence, this phase (from the fourteenth to twenty-eighth days) is known as thesecretory phase. If the ovum is not fer-tilized, the endometrium becomes thinner and areas of cell death (necrosis) begin to appear in the en-dometrium. Blood vessels go into spasm and some bleeding is seen. The inner lining of the endometrium sloughs off and this collection of dead cells, together with the blood, is the menstrual flow.

Normally, the menstrual blood contains 75% arterial and 25% venous blood. It contains tissue debris from the endometrial lining together with prostaglandin and fibrinolysin (an enzyme that prevents clotting); there-fore, clots are not seen in the menstrual flow (unless the flow has been excessive). Usually, menstruation lasts from 3–5 days (range, 1–8 days). The volume of blood can range from slight spotting to 80 mL (2.7 oz). Flows greater than that are considered abnormal.

At times, especially the first year after menarche (first menstrual period) and the last few years of menopause (the time when menstrual cycles cease), ovulation does not occur in every cycle. These are known as anovulatory cycles.

Changes in the Cervix

The cervical mucosa and its secretions also undergo cyclical changes. The mucus secreted is thinner (less viscous) and more alkaline during the follicular phase. These changes promote survival and motility of the sperm. During the secretory or luteal phase, the secretions become thicker. Some individuals use the changes in the consistency of the cervical secre-tion to determine the approximate time of ovulation.

Changes in the Vagina

The cells in the vagina also undergo cyclical changes. During the later part of the cycle, the epithelium be-comes thicker and is infiltrated with white blood cells. The mucus secretion becomes thicker during this phase.

Changes in the Breast

During the proliferative phase, the ducts of the mam-mary gland increase in number and size. In the later half of the cycle, the lobules of the glands increase in size. The blood flow is increased and fluid tends to ac-cumulate in the interstitial tissue. This is responsible for the tenderness, swelling, and pain experienced by individuals about 10 days before the start of the next cycle. All of these symptoms disappear at the start of menstruation.

All changes that occur during the menstrual cycles are a result of the changing levels of hormones se-creted by the hypothalamus, pituitary, and ovaries (see Figure 7.10). 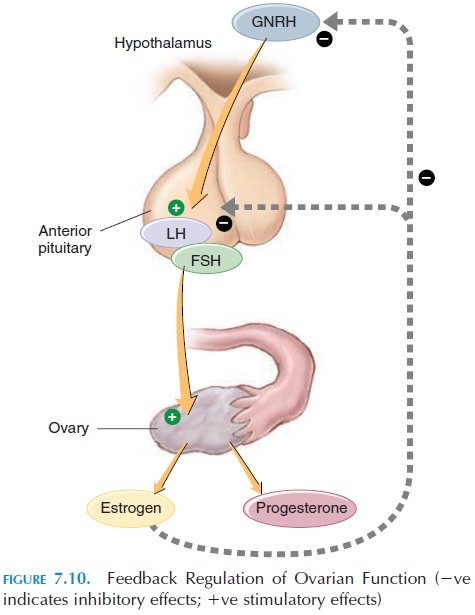 The Role of the Hypothalamus

Because of the connections of the hypothalamus with the rest of the nervous system, hormones se-creted by it can be altered according to changes de-tected by the nervous system in the external environ-ment. For example, regular menstrual periods often disappear when young girls move away from home (boarding school amenorrhea). The fear of preg-nancy, at times, can inhibit menstruation. Other than being affected by neural mechanisms, the hypothala-mus is affected by the plasma levels of sex hormones by negative feedback mechanisms.

The Role of the Pituitary Gland

The pituitary secretes two hormones, follicle-stimu-lating hormone (FSH) and luteinizing hormone(LH). FSH stimulates the growth of ovarian follicles. LH is responsible for the final maturation of the fol-licles and estrogen secretion from the ovary. A sud-den increase in levels of plasma LH results in ovula-tion. LH also causes the development of the ruptured ovarian follicle into the corpus luteum (in the later part of the cycle) and secretion of the hormones es-trogen and progesterone by the corpus luteum.

The Role of the Ovaries

As previously mentioned, the ovaries secrete the fe-male sex hormones estrogen and progesterone. The secretion of estrogen peaks twice during the men-strual cycle; once just before ovulation and once in the middle of the luteal phase.

The hormone estrogen affects many organs. It facili-tates the growth of the ovarian follicle and increases the motility of the fallopian tubes. It increases the size of the uterus and excitability of the uterine smooth muscles. It also sensitizes the uterus to the hormone oxytocin at the time of labor. Being from the same steroidal family, it has the properties of other steroids, such as fluid and salt retention in the body. In the breast, estrogen is largely responsible for the increase in size at puberty. Estrogen accelerates the growth of long bones and closure of epiphysis at puberty and decreases the rate of bone resorption. Estrogens tend to lower the levels of cholesterol in the blood. This may be one of the reasons for the lower incidence of cardiovascular disease, such as atherosclerosis, in women.

Progesterone is a hormone secreted mainly by the corpus luteum. The primordial follicles also secrete small amounts. During pregnancy, the placenta se-cretes this hormone. The principal organs affected by this hormone are the brain, uterus, and breasts. It is responsible for the cyclical changes that occur in the luteal phase of the menstrual cycle and for the slight increase in body temperature at the time of ovulation. Together with estrogen, progesterone is used in vary-ing doses to prevent ovulation (oral contraceptives).

The ovaries secrete a hormone called relaxin. This hormone is also secreted by the placenta in pregnant women. Relaxin relaxes the pubic symphysis and other pelvic joints and softens and dilates the uterine cervix at the time of pregnancy.