Development of The Fetus

The development of the fetus involves the division and differentiation of cells and the changes that occur in the fertilized ovum to produce and modify the anatomic structures.

This section gives an overview of fetal development, the maternal changes that occur during pregnancy, and the physiology of labor and lactation.

DEVELOPMENT OF THE FETUS

The development of the fetus involves the division and differentiation of cells and the changes that occur in the fertilized ovum to produce and modify the anatomic structures. This process begins at the time of fertilization or conception. Although all human beings go through the same developmental processes, individual distinct characteristics are a result of the genetic makeup of the chromosomes in the sperm and ova.

The process of fertilization involves the fusion of the contents of the sperm and ova to make up a zygote with 46 chromosomes. This typically occurs in the fallopian tube, which implies that the sperm has to travel the long distance between the vagina and the fallopian tube. The sperm are helped along by the movement of the flagella, contractions of the uterine wall, and the cilia in the tubal epithelium. Although about 200 million sperm are introduced into the vagina, only about 100 reach the ova. Despite the fact that ultimately only one sperm is required for this process, the enzymes located on the head of the sperm are required to penetrate the layer of cells from the ovarian follicle that surrounds the ova. The moment one sperm penetrates the cell membrane of the ovum, rapid changes occur in the cell membrane to prevent other sperm from entering. From this time, the zygote rapidly multiplies and differentiates until a 3–4 kg (6.6–8.8 lb) infant is formed at the end of 9 months.

The time spent in prenatal (time in the uterus) devel-opment is known as the period of gestation. The ges-tation period is about 38 weeks, calculating from the estimated date of fertilization (approximately two weeks from the first day of the last menstruation). This period, for convenience, is divided into 3 trimesters of 3 months each.

The First Trimester and Formation of Placenta

About 4 days after fertilization, the dividing, fertil-ized mass of cells (now known as the blastocyst) reaches the uterine cavity where it implants (at-taches) in the endometrium of the uterus. The cells closest to the endometrium undergo rapid changes, eroding the maternal capillaries to form the placenta (see Figure 7.11). The endometrium also changes and, together with the fetal cells, forms the pancake-shaped placenta. Thus, the fetal blood, although not mixing with the mother’s blood, comes in close con-tact with it. Eventually, the fetus moves away from the placenta, only connected to it by blood vessels— two umbilical arteries and one umbilical vein. This is the umbilical cord. The umbilical arteries carry de-oxygenated blood from the fetus, and the umbilical vein carries oxygenated blood from the placenta to the fetus. 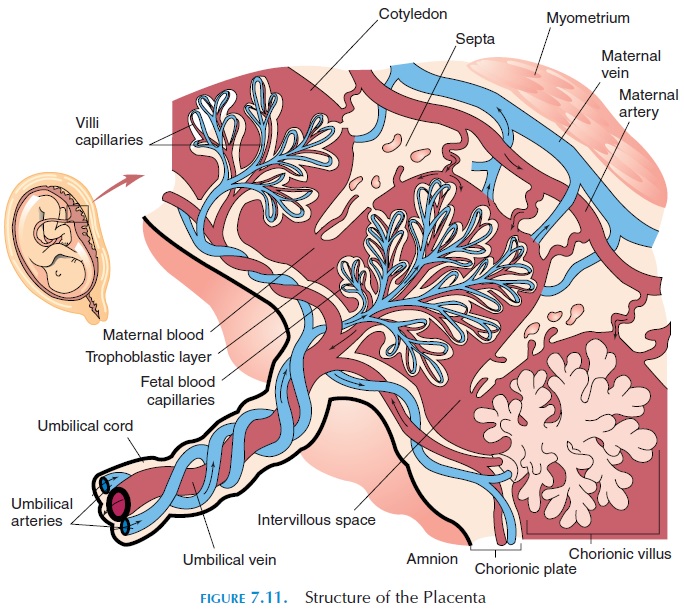 The amniotic fluid cushions the developing fetus. The cavity where this fluid is located is known as the amniotic cavity. The amniotic fluid regulates fetalbody temperature, serves as a shock absorber, and prevents the fetal tissue from adhering to the mater-nal tissue.

The fluid is initially derived from the mother’s blood. Later, the fetus contributes to its for-mation. This fluid is referred to as the bag of waters, which ruptures at labor. (Please refer to more ad-vanced textbooks for details of fetal development.)

Functions of the Placenta

The placenta has many functions. It serves as the res-piratory, gastrointestinal, and excretory system for the fetus. Oxygen from the maternal blood diffuses into the fetal blood while the carbon dioxide diffuses in the opposite direction. Nutrition required by the fetus is brought by the uterine blood vessels to the placenta to be transported into the fetal circulation. The pla-centa also stores carbohydrates, fats, proteins, cal-cium, and iron, which can be released into the fetal circulation as and when required.

Waste products, such as urea, are removed from the fetus via the placenta. In addition, the placenta has endocrine functions. It secretes many hormones such as human chorionic gonadotropin (HCG), prolactin, relaxin, progesterone, and estrogen. The hormone HCG resembles LH and is responsible for maintaining the endometrium in the secretory phase during pregnancy. In addition, HCG keeps the corpus luteum in the ovary functional, secreting proges-terone for 3 to 4 months of gestation, at which time the placenta takes up this function.

The placenta also serves as a protective barrier; not allowing most microorganisms to pass through. Certain antibodies (IgG antibodies) can cross the pla-centa and protect the fetus from certain diseases. The placenta also contains enzymes that are capable of converting biologically active molecules into less ac-tive, water-soluble forms. In this way, the placenta prevents harmful substances from reaching the fetus. Unfortunately, certain viruses, such as those causing AIDS, German measles, herpes, chickenpox, measles, encephalitis, and poliomyelitis, can cross the pla-centa. Many drugs and other substances, such as al-cohol, ingested by the mother can cross the placenta. Of these, a number are capable of causing fetal birth defects.

The time between the start of the third week to the end of the eighth week is referred to as the embry-onic period, and the developing organism is calledthe embryo.Before the embryonic period, the devel-oping structure can sustain itself. The embryo, how-ever, depends on its mother for sustenance. From the eighth week, the embryo is called a fetus. The fetalperiod extends from the beginning of the ninth weekto birth. At the end of 38 weeks, the fetus is consid-ered full-term.

The Second and Third Trimester