Endocrine Function of the Testis

The male sex hormones are known as androgens.

ENDOCRINE FUNCTION OF THE TESTIS

The male sex hormones are known as androgens. The major hormone secreted by the interstitial cells (Leydig cells) of the testis is testosterone. Testos-terone is a steroid hormone and, like all steroids, is derived from cholesterol. The adrenal cortex also contributes to the concentration of androgens in the plasma.

At the time of fetal development, as mentioned, testosterone has an effect on the brain, resulting in the male pattern of behavior. It also stimulates the development of the internal male genitalia. Later, testosterone develops and maintains the male sec-ondary sex characteristics. It also has a growth-promoting and protein-building effect. The androgens increase the synthesis and de-crease the breakdown of proteins. The synthetic ana-bolic steroids, often misused in sports, capitalize on this function.

Testosterone secretion is controlled by follicular stimulating hormone (FSH) and luteinizing hormone (LH) from the anterior pituitary (see Figure 7.4). FSH and LH are, in turn, controlled by gonadotropin re-leasing hormone (GnRH) secreted by the hypothala-mus. FSH is required for sperm manufacture. LH mainly functions to stimulate production of testos-terone. The level of testosterone in the plasma has a negative feedback effect on the hypothalamus and pituitary. 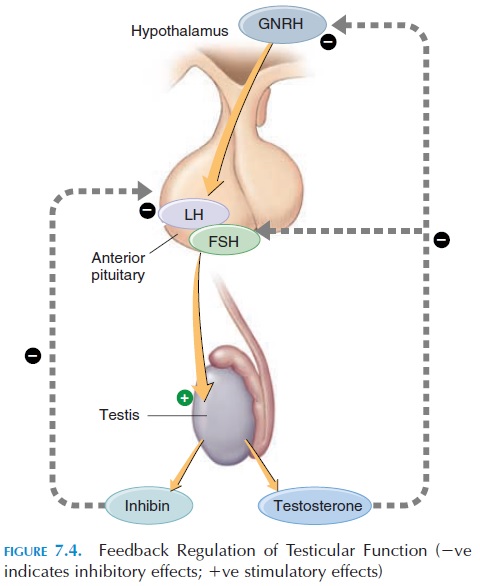 The cells of the testis also produce another hor-mone known as inhibin, which helps to regulate the secretion of FSH.