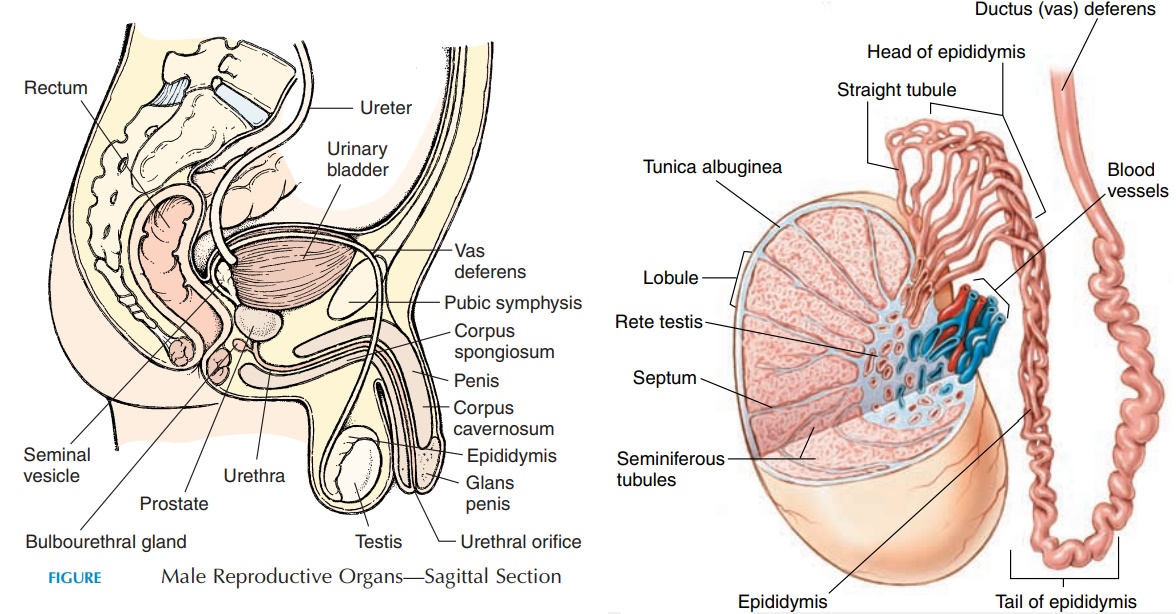 The male reproductive system consists of the gonads (testis) that produce gametes and hormones; the ducts that receive and transport the gametes; the ac-cessory glandsthat secrete fluid into the ducts forthe nourishment and maintenance of the gametes; and the external structures associated with the repro-ductive system, collectively known as the externalgenitalia (see Figure 7.1). 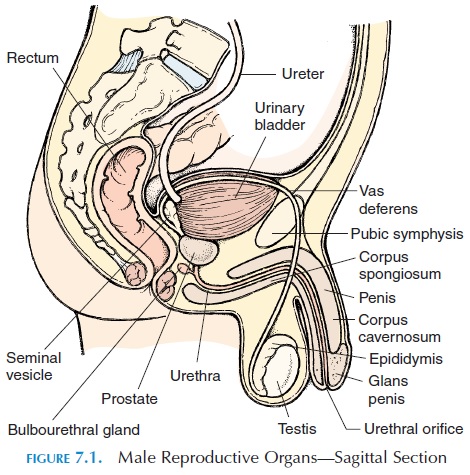 Each testis, shaped like a flattened egg, is about 5 cm (2 in) long, 3 cm (1.2 in) wide, and 2.5 cm (1 in) thick. The testis hangs inside the scrotum—a pouch that lies posterior to the penis and anterior to the anus. In the fetus, the testis develops inside the abdominal cavity close to the kidney. As the fetus develops, the testis de-scends (anteriorly and inferiorly), pushing through the anterior abdominal wall, into the scrotum.

As it moves down, it is accompanied by the supplying blood ves-sels, lymphatics, and nerves. In addition, it is covered by remnants of the peritoneum and abdominal wall through which it passed during its descent. Normally, the testis has descended by the seventh month of de-velopment and is positioned in the scrotum at birth.

The scrotum (see Figure 7.2) consists of a thin layer of skin and underlying fascia. The fascia has a layer of smooth muscle known as dartos, which is respon-sible for the wrinkles seen in the skin. Deep to the dermis, there is a layer of skeletal muscle known as the cremaster muscle. The contraction of this mus-cle causes the testis to be pulled closer to the body when cold. Relaxation of the muscle causes the testis to move away from the body. Thus, the temperature of the testis is maintained about 1.1°C (34°F) below that of the body—the temperature required for nor-mal sperm production. 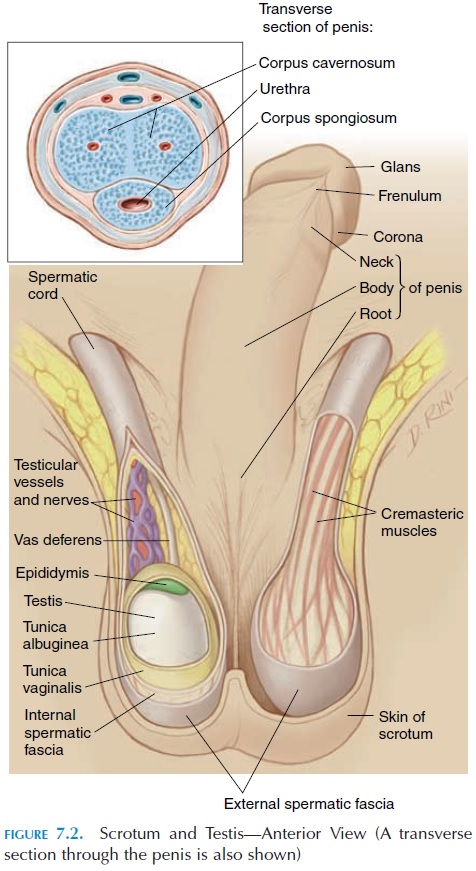 Internally, the scrotum (see Figure 7.3A) is divided into two chambers. The division can be seen on the external surface as a thickening in the midline. A testis lies in each of these chambers or cavities. Due to the partition, infection or inflammation in one cav-ity does not easily spread to the other. The testis is separated from the inner surface of the scrotum by a space lined by serous membrane. The membrane, known as the tunica vaginalis, is a remnant of the peritoneum through which the testis pushed during development. The tunica vaginalis reduces the friction between the testis and the scrotum. If inflamed, this cavity can be filled with fluid, producing a condi-tion known as hydrocele.

Microscopic Structure of the Testis

Deep to the tunica vaginalis, a layer of thick collagen fibers called the tunica albuginea covers the testis. This layer extends into the testis, partitioning it into manylobules. Tightly coiled, slender tubules, known as seminiferous tubules, lie inside each of the lob-ules. Each tubule averages about 80 cm (31.5 in); to-gether, end to end, the tubules extend to more than a kilometer long (0.6 mile). The sperm are manufac-tured inside the tubules, and sperm in different stages of development can be seen inside a cross-sec-tion of the tubules (see Figure 7.3B). 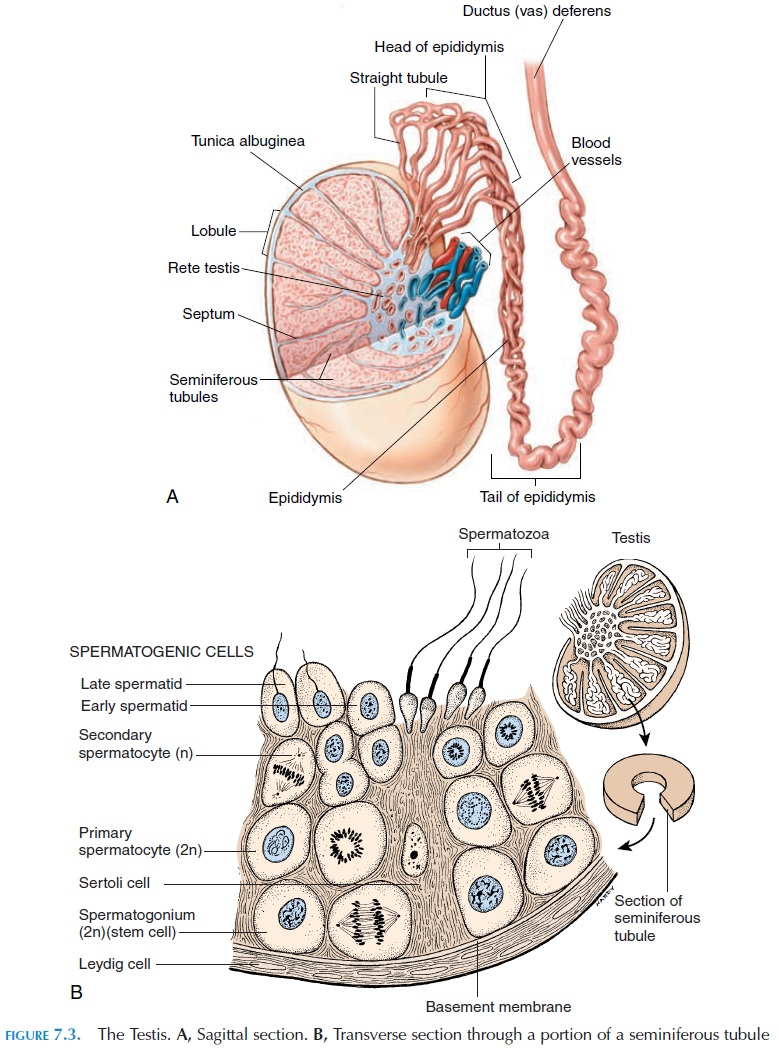 The formation process of sperm is known as sper-matogenesis. Spermatogenesis (Figure 7.3B) beginsin the outermost cell layer in the tubule and more mature sperm can be seen closer to or in the lumen. The seminiferous tubule is isolated from the general circulation by the blood-testis barrier. This barrier is maintained by the Sertoli cellsor sustentacularcells. The Sertoli cells located in the outermost layerof the seminiferous tubules are joined together by tight junctions and regulate the composition of fluid in which the sperm is suspended. The Sertoli cells, in addition, provide nutrition to the sperm and also se-crete important hormones needed for sperm matura-tion. The blood-testis barrier is important in prevent-ing the immune system from attacking the sperm.

Each sperm (Figure 7.3B) has a rounded head and a long tail. The head houses the nucleus with densely packed chromosomes. The head is covered by a cap (acrosomal cap), which contains the enzymes re-quired for digesting the outer layer of the ova at the time of fertilization. The long tail helps the sperm propel forward with a rapid, corkscrew motion. Be-cause the sperm does not have energy reserves, it re-lies on the surrounding fluid for survival.

The seminiferous tubules drain into a network of ducts, which, in turn, are continuous with a highly coiled structure known as the epididymis. The epi-didymis lies along the posterior border of the testis and consists of a coiled tubule about 7 meters (7.7 yd) long. This tubule continues as the vas deferens or ductus deferens from the inferior portion of the testis. The epididymis monitors and adjusts the com-position of the tubular fluid. It also removes dam-aged sperm and dead cells. In addition, it stores the sperm and facilitates its maturation. The sperm are moved along the reproductive tract by peristaltic contractions of the smooth muscle in the walls of the tubule.