General solution of the transmission line:

It is used to find the voltage and current at any points on the transmission line. Transmission lines behave very oddly at high frequencies. In traditional (low-frequency) circuit theory, wires connect devices, but have zero resistance. There is no phase delay across wires; and a short-circuited line always yields zero resistance.

Let's start by examining a diagram. A sinusoidal voltage source with associated impedance ZS is attached to a load ZL (which could be an antenna or some other device – in the circuit diagram we simply view it as an impedance called a load). The load and the source are connected via a transmission line of length L:

Examples of common transmission lines include the coaxial cable, the microstrip line which commonly feeds patch/microstrip antennas, and the two wire line:

To understand transmission lines, we'll set up an equivalent circuit to model and analyze them. To start, we'll take the basic symbol for a transmission line of length L and divide it into small segments:

A circuit with distributed parameter requires a method of analysis somewhat different from that employed in circuits of lumped constants. Since a voltage drop occurs across each series increment of a line, the voltage applied to each increment of shunt admittance is a variable and thus the shunted current is a variable along the line.

Hence the line current around the loop is not a constant, as is assumed in lumped constant circuits, but varies from point to point along the line. Differential circuit equations that describes that action will be written for the steady state, from which general circuit equation will be defined as follows.

C= capacitance between conductors, faradays per unit length of line

S = distance to the point of observation, measured from the receiving end of the line

I = Current in the line at any point

E= voltage between conductors at any point

The below figure illustrates a line that in the limit may be considered as made up of cascaded infinitesimal T sections, one of which is shown.

This incremental section is of length of ds and carries a current I. The series line impedance being Z ohms and the voltage drop in the length ds is

The shunt admittance per unit length of line is Y mhos, so that

The admittance of thr line is Yds mhos. The current dI that follows across the line or from one conductor to the other is

These are the differential equations of the transmission line, fundamental to circuits of distributed constants.

Where A,B,C,D are arbitrary constants of integration.

Since the distance is measured from the receiving end of the line, it is possible to assign conditions such that at

A second set of boundary condition is not available, but the same set may be used over again if a new set of equations are formed by differentiation of equation 7 and 8. Thus 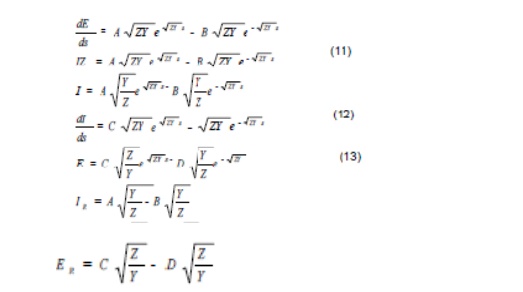 Simultaneous solution of equation 9 ,12 and 13, along with the fact that ER = IRZR and that Z Y has been identified as the Z0 of the line,leads to solution for the constants of the above equations as 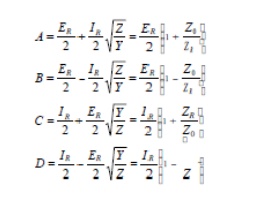 This results indicates two solutions, one for the plus sign and the other for the minus sign before the radical.