Home | | English 5th Std | The Strength in his Weakness: Questions with Answers

The Strength in his Weakness: Questions with Answers

A. Choose the correct option.

1. His father wanted him to do well in studies.

2. Akilan’s passion is to learn Judo.

B. Name the character or speaker.

3. “How did I win the competition with a single stroke?” – Akilan

4. “My dear, you learnt the most difficult stroke in Judo.” - Akilan’s master

He lost his hand in an accident.

3. What was his master’s advice?

His master advised him to believe in himself. He said that Akilan should focus on his strengths, not on his obstacles.

4. Why did everyone ridicule the boy?

The people did not know how a boy with one hand could win a national competition. So they ridiculed him.

His master's advice energised Akilan. He focused on his single stroke without thinking about the strength of the opponent. So Akilan won the match. 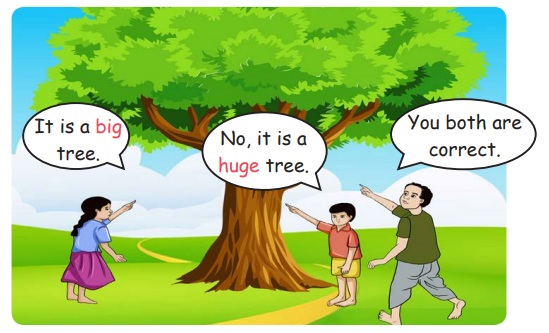 As the father said the words big and huge have similar meanings.

There are many words that have the same meaning. Let us see.

Read the sentences and write the word with same meanings for the underlined words.

I ate the big apple.

This is a little dog.

I threw a rock in the lake.

I am so happy.

Circle the differences between the following pictures.

i. The sun is happy.

ii. The tree is tall.

iii. The pond is full of water.

ii. The tree is short.

iii. The pond is empty.

The words that denote differences in the above pictures give the opposite meaning.

Happy is the opposite of sad.

Tall is the opposite of short.

Full is the opposite of empty.

Fill in the blanks with the correct opposites.

Is this bottle empty? No, it is full.

Is this a small tree? No, it is huge.

Is he standing on top? No, he is at the bottom.

Is this a dark room? No, it is bright.