Long ago, there lived an archer named Uthaman. During his time, the forests and animals filled the lands. He was a skilled archer and could perform wonderful feats of archery. 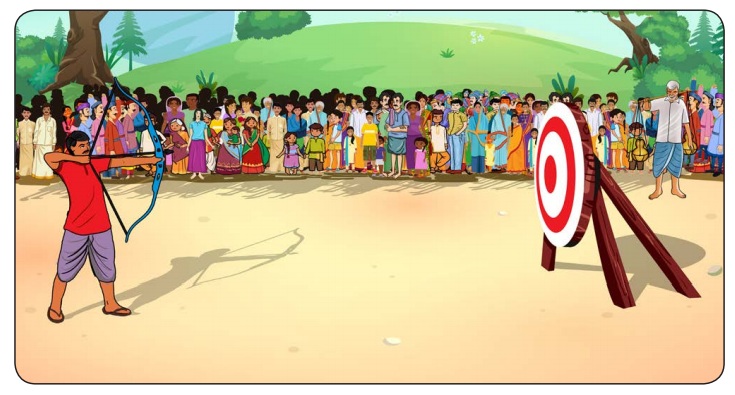 Long ago, there lived an archer named Uthaman. During his time, the forests and animals filled the lands. He was a skilled archer and could perform wonderful feats of archery. He could hit the centre of the target precisely, no matter how far the target was. He was also a show off. He liked to show his skills for the crowds to admire.

One day, as usual, he was shooting arrows at the targets. The admirers watched in awe. At that time a man with a beard as white as snow, carrying oil gourds, joined the crowd and stood at the back. As Uthaman finished, the crowd clapped and cheered for him except the oil seller. He neither clapped nor cheered.

Suddenly with a deep and loud tone, he said, “It‛s just a matter of practice!” Uthaman got annoyed. The irritated Uthaman asked, “Are you an archer? Do you think anyone can do what I do?”

The old man said calmly, “No sir, I am not an archer. I don’t doubt your skills. All I said was that, everything was a matter of practice.” Uthaman was red in anger. “What do you know to pass such thoughtless comments on others? Who are you?”

“Sir, there is no reason to be angry. I am a simple oil seller. I am sure you must have guessed that by seeing my gourds. I fill these gourds with oil and sell them. Over the years, I have achieved some skill in filling the gourds. If you allow, I will show it to you.” said the old man. Uthaman, in a mocking tone, said, “Hmm… Show us your skills.”

Everyone was curious. They wanted to see what would happen next. The crowd inched closer to get a clear view of the oil seller. Unfazed by the crowd and by habit, the oil seller was calm.

He patiently placed an empty gourd on the ground. He then placed a small coin on the mouth of the gourd. The small coin made of copper had a small hole at its centre. The oil seller stood up, took some oil in his ladle and began to pour oil into the gourd. From the height he poured the oil, it went straight into the gourd through the hole in the coin. When the oil seller had finished filling the gourd, he lifted the coin. He showed people that the coin did not have any trace of oil. 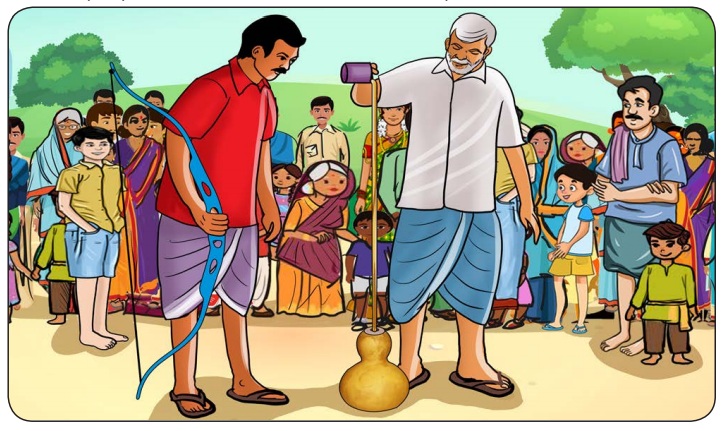 The crowd was shocked to silence. Then, one person cheered and soon, the entire crowd burst into a loud cheer for the oil seller. The oil seller smiled and said, “As I told, there is nothing special about it. It‛s only a matter of practice.”

Uthaman was just as surprised as the crowd. He smiled and said, “You have taught me something today. Thank you.”