Several types of cells are present in the olfactory bulb. The most important of these are:

a.              The mitral cells and tufted cells that give origin to fibres of the olfactory tract.

Other cells present are as follows:

b.    Periglomerular cells and granule cells have processes that remain confined to the bulb.

The olfactory bulb is made up of a number of concentric layers which are shown in Fig. 16.4.

2.              The second, or glomerular, layer contains synaptic glomeruli in which terminals of olfactory nerve fibres synapse with dendrites of mitral cells, tufted cells and periglomerular cells.

3.              The third layer is in the form of a plexus formed by dendrites of mitral and tufted cells. Somata of tufted cells  also lie in this layer. 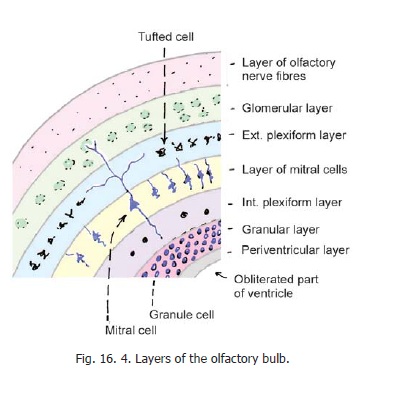 Apart from olfactory nerve fibres, the olfactory bulb receives centrifugal fibres from a number of sources as shown in Fig. 16.5. It is believed that perception of smell can be considerably modulated through these inputs.

Many neuropeptides are present in the olfactory bulb. These include GABA, dopamine, glutamate, aspartate, enkephalin, luteinising hormone releasing hormone (LHRH) and substance P. 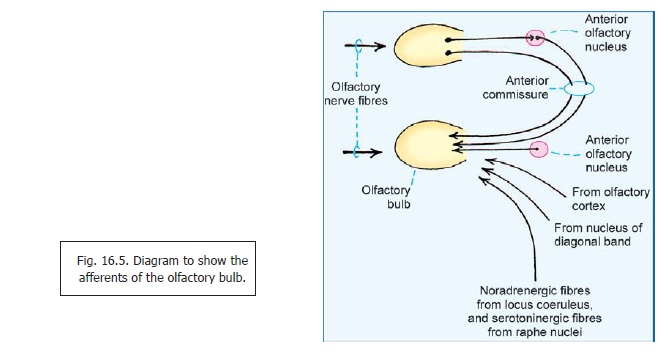 The olfactory tract also contains centrifugal fibres travelling to the olfactory bulb from various centres in the brain. These are shown in Fig. 16.5.

The term olfactory cortex is applied to all areas of the cerebral cortex that receive direct fibres from the olfactory bulb.

In the past it has been held that olfactory pathways differ from those for other sensations in that there is no relay in the thalamus. This concept needs modification in that while most olfactory fibres reach their cortical destinations without relay (ignoring relay of some in the anterior olfactory nucleus), some others are now believed to reach the thalamus.

The main regions receiving direct fibres from the olfactory bulb are:

1.              The prepiriform cortex (including the lateral olfactory gyrus and the gyrus ambiens).

The term piriform cortex or primary olfactory cortex is rather loosely applied to these regions, the areas included varying in different accounts. Apart from the above, some direct olfactory axons also reach some parts of the cortex of the insula; and the main (central) nuclei of the amygdaloid complex.

2.              It has been recently recognised that the piriform cortex sends a major projection to the medialdorsal nucleus of the thalamus. From here olfactory impulses are relayed to the cortex on the orbital aspect of the frontal lobe (orbito-frontal cortex, centro-posterior part)

3.              Another region of the orbitofrontal cortex (latero-posterior) receives direct projections from thepiriform cortex. This projection by-passes the thalamus. Studies on alterations in brain blood flow in response to olfactory stimuli suggest that appreciation of such stimuli takes place bilaterally in the piriform cortex, but only in the right frontal lobe.

The primary olfactory cortex is connected to various other areas. In the past, many of these areas have been included under the term rhinencephalon or smell brain. It is now recognised, however, that although these areas might receive olfactory impulses their primary functions are not olfactory. Some of these areas and their connections are considered below as part of the limbic system.