It is very dark, and the wind is whistling, no one is around. One can hear the cry of a wolf far away. 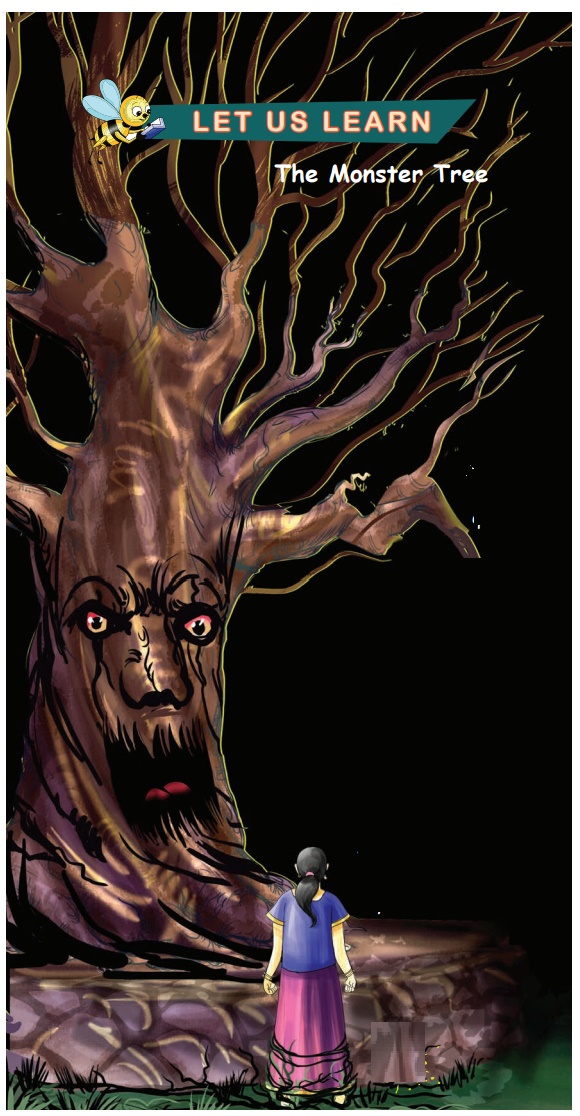 It is very dark, and the wind is whistling, no one is around. One can hear the cry of a wolf far away. The bush is dancing to the wind’s music. It seems as if it was a welcome dance. Behind the bush, there was a huge shadow. It moved slightly and, for a second, everything was quiet. No wind, no movement, nothing. There was dead silence. Suddenly, a bolt of massive lightning appeared with a rumble of thunder. In the lightning, I could see the tree. It was a monster tree. I got scared and wanted to run away. As I screamed in fear, the monster woke up. I could see it, now awake, transformed into a monster amid the bolts of lightning that hit the ground. I wanted to run, but I couldn’t move my legs. The reeds from the bush have caught my legs, "Oh my god! It is going to kill me," I thought! I tried to free my legs but in vain. The monster’s branches became very sharp, like a sword, and came towards me. My heart raced and, I felt it might burst.

“Jana! What happened? Get up! Did you have a nightmare?” Asked her mother. Jana hugged her mother and slept with her. Her mother asked her about the dream in the morning, but Jana said nothing. Only a month ago Jana and her family had come to the village.

The previous day, Jana's friend was telling her, "It was a very big peepal tree near the entrance of the village. All children used to play under it, and many birds made nests on it. The elders rested in the shade. But one day two men were running away from the tree. They said there was a monster in it and asked people to not go near it. The children ignored the warning and went to play. When the children stepped near the tree, it shook its leaves. They hadn’t seen the tree like this. They looked at one another and, altogether took another step. The tree twisted its branches and threw the swing near them. Then, the trunk of the tree cracked open and the tree roared. The tree had become a monster.They got scared and ran away."

What can be the reason for the tree to become a monster?

She continued, "Children went to the village and told the elders what happened near the tree. No one believed them. Soon many more got affected by the tree, and this worried the people of the village. They planned to cut it. But the village head stopped them. He told them how the tree had helped the village.He advised them to make a fence around the tree to stop people from going near it. Since then, the tree is called the monster tree. Many years have passed, and the area near the tree is desolate now."

The previous evening, Jana went to play with her friends. She was a brave and curious little girl. They were playing a few meters away from the monster tree. Jana was waiting for her turn. Just then, she felt her ears tingle. She removed her earrings and kept it on the ground. Suddenly, a squirrel took her earring and ran away. She chased it, and before she knew, she was in front of the monster tree. Her friends shouted, "No, Jana! Don’t go there!" She replied, "I have to find my earring." Then, they shouted in fear, "It is behind you. Run Jana! Run!" She turned and saw one of the branches coming to hit her. She bent down and dodged it. She ran away from the tree. That night, she had the nightmare.

That day Jana decided to overcome her fear. So, she asked more about the monster tree. She came to know that the tree was good and helpful. She put her fear away and tried to find the reason for the change in tree's behaviour. So, she spent many days watching the tree. She went to the tree whenever she had the time. She felt that the tree was also watching her.

One day, she decided to go near the tree. When she crossed the fenced area, the tree started to scare her. But, not as much as before. She stepped forward, and the tree swayed its branches again. Then, the tree dropped its sharp branches close to her. Yet, she was not afraid. When she was going to touch the tree, it opened its mouth and roared. Jana calmly touched the tree and patted it. The branches stopped moving, and it was quiet. The tree grumbled, "Go away! Please, go away!" She asked, "Why? I know you are a good tree. Why are you doing this?" The tree shouted, "Yes… I was good but, it is only because of you I have become like this!"

"Sorry! You are a little girl. What would you do? Wait, let me call my friends," said the tree. "Come out," said the tree. In a few seconds, one by one, many squirrels came out from the tree. Hundreds of them were there.

The tree continued, "They are the reason for me to become a monster. Long ago, a pregnant squirrel came here."

She said, "I am the last of my kind in this village. The hunters are trying to kill me. Please save me."

The tree said, "I did not know that people were so selfish. They destroy everything mercilessly. I wanted to save the squirrels. So, I became a monster."

After listening to the tree’s story, Jana felt embarrassed. She went to the village head and explained. The villagers understood their mistake and took an oath not to do any harm to nature. From that day on the villagers started calling it 'The mother tree'.

ignore :refuse to take notice of