Story: The Case of The Missing Water

The tank in Divya’s village was almost dry. Ammachi began to pray for rain. Amma collected all the buckets and pots and vessels in the house and filled them up.

The Case of The Missing Water 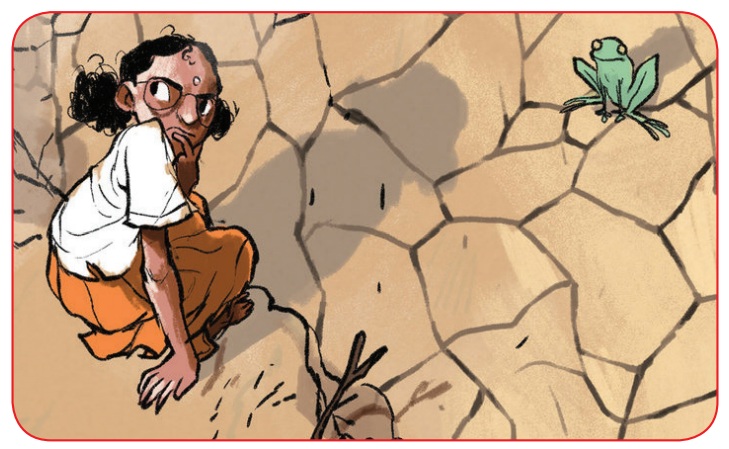 The tank in Divya’s village was almost dry. Ammachi began to pray for rain. Amma collected all the buckets and pots and vessels in the house and filled them up.

“We need to store as much water as we can,” she said.

Appa collected tools to dig a little deeper. “We just need enough until the rains arrive,” he said.

Divya got out her notebook and pencil. She put on her thinking cap and followed her parents to the tank. She examined the tank bed closely. It was cracked and dusty.

Divya wondered, “Where did the water in the tank go? Did it run away? Was it stolen? This is a mystery!”

Divya had found them in her book, marking the page she was reading.

“I’ll find that water,” Divya muttered to herself. 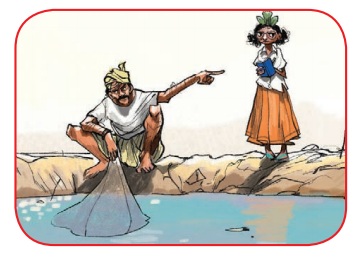 Divya walked to the other side of the tank, past dead fish and dried reeds.

“Do you know where the water could have gone?” Divya asked a fisherman.

Divya followed the dry stream bed down the hill. At the bottom was another tank. It had lots of goats, but no water.

Divya asked the goatherd, “Do you know where the water might be?” 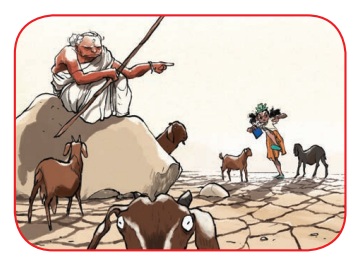 “That’s where I came from,” Divya said. “No water there.”

“Further up, then?” the goatherd said. “That’s where your water comes from.”

Divya climbed up to the tank. Then she climbed up some more to a tank further up the hill. There was no water, no birds. There was only one person there.

“Rani, I can’t find any water. Any idea where it’s gone?” Divya called to her. She knew Rani from school.

Divya was suddenly angry. She stomped her foot.

“NO!” she shouted. “It’s not. I have searched and searched. It’s not upstream or downstream. Got it?”

“How about up there?” Rani suggested.

Divya and Rani looked up at the sky. The sun glared back at them. Everything was white-hot and dusty.

“No,” they agreed together. “No water there.”

Divya collapsed into the boat with Rani and gnawed on a lotus stem. She was hot and tired.

“Manju’s parents left the village,” Divya said. “They went to the city where they have water. Maybe we should all go.”

“Fine,” Divya said. And she stomped back home. But it wasn’t fine! There was still no water, still no rain.

The next day, Divya brushed her teeth with muddy tank water in a tiny glass.

In school, the class was half-empty. More families had left the area. She missed all her friends! In the middle of Environmental Studies class, she turned and ran out of school. 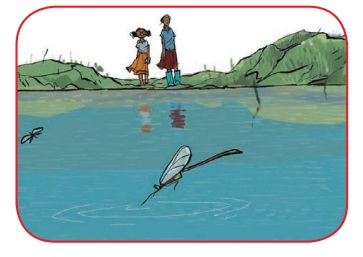 She ran and ran until she was panting. She finally sat at the side of the road.

“I have to find the water!” she huffed.

“Can I help?” said a voice. It was Rani who had seen Divya running away from school.

“Sanitary Engineers build pipes and tanks and drains. I am going to be one when I grow up,” Rani said.

Divya and Rani decided to draw a map of their village and all its tanks and streams, showing all the places where the water might have flowed.

Where could the water possibly have gone?

Finally, they sat back and pored over the map. “We haven’t seen that tank yet,” Divya pointed to one of the tanks they had drawn.

Divya and Rani began climbing up the hill. The stream here was dry as well.

“Maybe we shouldn’t have missed school. This tank is probably dry as well,” Rani said sadly.

When they reached the tank, Divya and Rani realised they were wrong.

This tank was full!

Rani pointed at a small pump at the end of the lake. There was a tanker just below the bund, collecting water as it flowed. A man stood by, guiding the tanker.

“Where are you taking our water?” Divya wanted to know.

“The city,” the man said. “I need to supply nine-thousand litres today!” 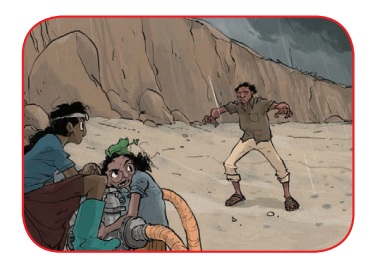 The man shrugged, “That’s how it is.”

“My friend is a Sanitary Engineer,” Divya yelled. “She knows what’s fair.”

Rani said quietly, “Yes, but I know you can’t just take our water away.”

Divya had an idea. She hugged the pump. “You can’t turn it on now!”

Rani ran up to hug the pump too.

That was when the clouds broke, and rain poured.

“The monsoon is here!” Divya shouted.

“I’m going home, even if you aren’t,” the tanker man said.

It rained and rained.

WOOSH, the bund overflowed, and the stream rushed down, splashing them.

“The water has been found! Mystery solved!” Divya said.

“WOOOOOO!” They yowled with joy. 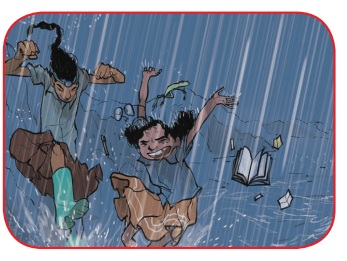