A. Answer the following questions.

1. When does the world become green?

The world becomes green when we keep the surroundings clean.

2. Who is responsible for the society?

All of us are responsible for the society.

When we put the litter in the dust bin we feel proud as human beings.

We should vow to do social service.

5. Are you the first to protect the nature?

Yes, I am the first to protect nature.

B. Pick out the rhyming words and write.

The past participle form is used in past perfect tense with auxiliary had. Come let us use it.

I had given him the book.

You had been to your uncle’s house. (be)

She had paid the bill. (pay)

They had met him before the party. (meet)

It had broken before I touch it. (break)

Let us see when to use past perfect tense:

Event happened before another in the past: 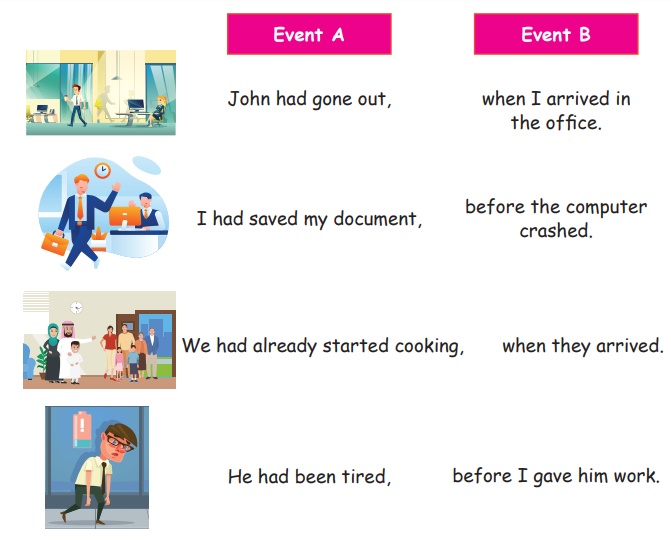 B. Complete the following sentences using past perfect tense.

1. The bus had left the bus stop before I went. (leave)

2. The exam had started when I reached the exam hall. (start)

4. The satellite had landed on the moon before they gave the command. (land)

5. Raju had arrived to the ground before others arrived. (arrive)

Future perfect tense is used for actions that will be completed before some other point in the future.

The past participle form is used in future perfect tense with auxiliary will have. Come let us use it.

I will have reached the place by 6 pm.

We will have completed the painting by tomorrow. (complete)

You will have won the match by this time tomorrow. (win)

They will have invited everyone to the marriage by next week. (invite)

He will have spent all the money with in an hour. (spend)

She will have got a job in America by next year. (get)

It will have eaten all the candies. (eat)

4. They had cooked the vegetables.  ✔

5. Muthu will have returned from Srilanka by next month. ×

1. I have posted the letter.

Past perfect:  I had posted the letter

Future perfect: I will have posted the letter.

2. She has bought a violin.

Past perfect: She had bought a violin.

Future perfect: She will have bought a violin.

3. Akash has jumped into the well.

Past perfect: Akash had jumped into the well.

Future perfect:  Akash will have jumped into the well.

4. We have built a house in our village.

Past perfect: We had built a house in our village.

Future perfect: We will have built a house in our village.

5. They have cooked their meal.

Past perfect: They had cooked their meal.

Future perfect: They will have cooked their meal

D. Fill the sentences with the appropriate verb.

1. Maha had asked a question to his father.

2. She will have attended the meeting by tomorrow.

3. The fly had sat in the food before she covered it.

4. Niru will have joined her family in 2 years.

5. The book had won him the award.

Listen to to the audio and tick (✔) if the statements are true.

It rained through the night in Chennai. India’s 4th largest city has experienced its heaviest rainfall in more than a hundred years. With the rain not letting up, much of the city is now under water. These pictures sent to us by local residents, show us the extent of the devastation. Navigating through the flooded streets is difficult, and at times difficult leaving many areas cut off. The airport is closed and train services suspended, while highways leading to Chennai are blocked. The army and navy are now being deployed to get to those who are still stranded. In some parts of the city, neighbourhoods are under several feel of water and residents have had to go without food. The power supply in many areas have also been cut. The rain is said to be caused by a depression in Bay of Bengal. With more showers expected, it is going to be a while before Chennai clears up.

1. Chennai is the fourth largest city in India to receive more rain. ✔

3. People were not able to get their food. ✔

4. The power supply in many areas is normal. ×

5. It rained because of a depression in Bay of Bengal. ✔

Today, we will learn to tell a story.

Step 1: Choose the story you want to tell.

Step 2: Tell the place where the story is happening.

Step 3: Tell who the characters are.

Step 4: Tell three events that lead to the end of the story.

The Ant and the Grasshopper

In a deep forest near the mountains, lived an ant and a grasshopper. The ant worked hard in the summer and saved food for the winter. The grasshopper played in the Sun without collecting food. The grasshopper always called the ant to play, but the ant wanted to save food for winter. It was now winter, the ant had food to eat but the grasshopper did not. We should work hard and save.

Is that easy? Why don’t you try?

Try to tell your friend a story on your own.

Once upon a time …