The Measurements of Dryness Fraction

THE MEASUREMENTS OF DRYNESS FRACTION

Let us consider a wet steam as represented by state 1 in the h-s diagram. When it undergoes a throttling process to state 2, it enters into the superheated region. By measuring the temperature and pressure after throttling the specific enthalpy can be obtained. As mentioned earlier during throttling enthalpy remains constant. Therefore the initial state can be completely fixed since the pressure before throttling and the corresponding specific enthalpy are known. 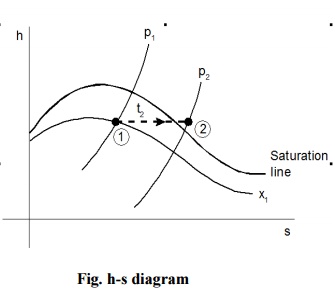 Steam from the main is extracted through a perforated tube projecting into it as shown in the Figure. Pressure of the steam is measured. It is then throttled into a chamber where the necessary pressure and temperature measurements are made. From the chamber the expanded steam is then condensed by circulating cooling water and discharged. 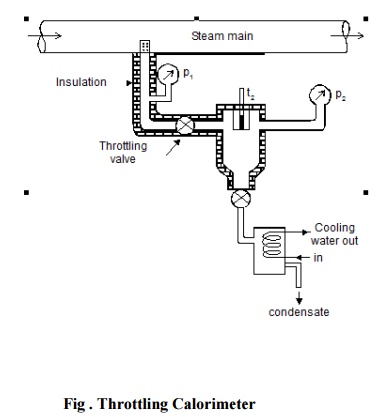 Wet steam, when subjected to sudden change in the direction of flow, a portion of the liquid falls due to gravity and gets separated from the main stream. Thus the remaining steam becomes rich in vapour, which upon throttling will become superheated vapour even at a pressure higher than atmospheric pressure. This principle is employed in the separating and throttling calorimeter.

The wet steam from the steam main is extracted through a perforated tube and sent to the separator where a portion of the liquid is separated due to sudden change in the direction. The remaining steam is throttled into a chamber where the required pressure and temperature measurements are made. Mass flow rate of liquid separated in the separator is collected and measured. Mass of the remaining steam is also measured by condensing the throttled steam and collecting it. Let be the mass of liquid separated in the separator and be the mass of steam  throttled 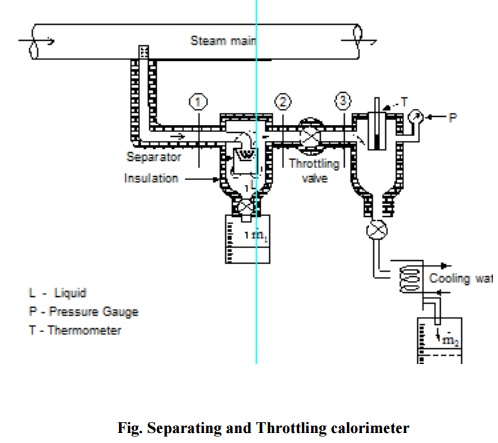