Chapter: 11th History : Chapter 1 : Early India: From the Beginnings to the Indus Civilisation

The Indus Civilisation represents the first phase of urbanisation in India.

The Indus Civilisation represents the first phase of urbanisation in India. While the civilisation was in its peak, several cultures, namely, Mesolithic and Neolithic cultures that we discussed earlier in the chapter, prevailed in other parts of India.

The civilisation that appeared in the north-western part of India and Pakistan in third millennium BCE is collectively called the Indus Civilisation. Since Harappa was the first site to be identified in this civilisation, it is also known as Harappan Civilisation. This civilisation did not appear all of a sudden. The beginnings of the Neolithic villages in this region go back to about 7000 BCE at the Neolithic site of Mehrgarh. Harappan culture is divided into various phases:

The urban phase was prevalent in the mature Harappan period and began to decline afterwards.

The Indus valley site of Harappa was first visited by Charles Mason in 1826, and Amri by Alexander Burnes in 1831. The site of Harappa was destroyed for laying the railway line from Lahore to Multan. The seal from this site reached Alexander Cunningham, the first surveyor of the Archaeological Survey of India (ASI). Alexander Cunningham visited the site in 1853, 1856 and 1875. But the importance of the site and the associated civilisation were not realised until Sir John Marshal took over as the Director General of ASI and initiated research at the site.

Geographical Area and the Settlements

The Indus Civilisation and the contemporary cultures covered nearly 1.5 million sq. km area in India and Pakistan. The settlements of Sutkagen-dor in the west on the Pakistan– Iran border; Shortugai (Afghanistan) in the north; Alamgirpur (Uttar Pradesh, India) in the east and Daimabad (Maharashtra, India) in the south are the boundaries of this civilisation. Its core area was in the regions of Pakistan, Gujarat, Rajasthan and Haryana.

The Indus region (Mehrgarh) is one of the areas of the world where agriculture and animal domestication began very early. We do not know if there is any continuity between the Neolithic cultures of the Indus region and the later urban civilisation. The early Harappan phase saw the development of villages and towns in the entire region. In the Mature Harappan phase, urban centres developed. 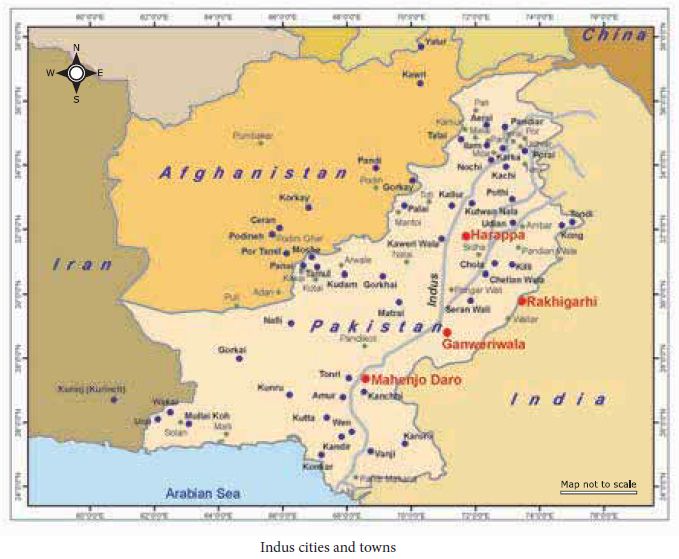 A civicauthority perhaps controlled the planning of the towns. The Harappans used baked and unbaked bricks, and stones for construction. The towns had a grid pattern and drainages were systematically built. The houses were built of mud bricks while the drainages were built with burnt bricks. Houses had more than one floor.

The site of Mohenjo-Daro had a planned town, built on a platform. It has two distinct areas. One is identified as a citadel and another as the lower town. The houses had bathrooms paved with burnt bricks and proper drains. Some houses had stairs indicating the existence of an upper floor. The houses had multiple rooms. Many of the houses had a central courtyard with rooms all around.

The citadel area had important residential structures that were either used by the public or select residents.

In Mohenjo-Daro, a building has been identified as a warehouse.

The Great Bath is a tank situated within a courtyard. The corridors were present on all four sides and stairs are seen on the northern and southern sides. It was well paved with several adjacent rooms. Some structures are identified as granary. The bricks were laid watertight with gypsum mortar. It had drainage. It is associated with a ritual bath. 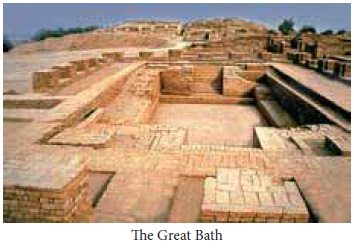 The structures identified as granary or Great Bath should be seen as archaeologists’ interpretations.

Agriculture was an important source of subsistence for the Harappans. The Harappans cultivated diverse crops such as wheat, barley, lentil, chickpea, sesame and various millets. Agricultural surplus was an important stimulus for a number of developments. They adopted a double cropping system.

The Harappans used ploughs. They perhaps ploughed the land and then sowed the seeds. Ploughed fields have been found at Kalibangan. They used both canal and well irrigation.

Pastoralism was also practised by the Harappans. They domesticated sheep, goat and fowl. They had knowledge of various other animals including buffalo, pig and elephant. But horse was not known to them. The Harappan cattle are called Zebu. It is a large breed, often represented in their seals. They also ate fish and birds. Evidence of boar, deer and gharial has been found at the Harappan sites.

Craft production was an important part of the Harappan economy. Bead and ornament making, shell bangle making and metalworking were the major crafts. They made beads and ornaments out of carnelian, jasper, crystal, and steatite, metals like copper, bronze and gold and shell, faience and terracotta or burnt clay. The beads were made in innumerable designs and decorations. They were exported to Mesopotamia and the evidence for such exported artefacts have been found from the excavations in Mesopotamian sites. 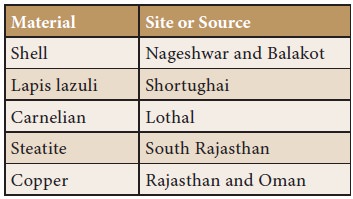 The Harappans used diverse varieties of pottery for daily use. They use well-fired pottery. Their potteries have a deep red slip and black paintings. The pottery are shaped like dish-on-stands, storage jars, 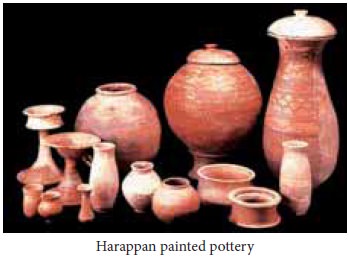 The Harappan civilisation belongs to the Bronze Age civilisation and Harappans knew how to make copper bronze tools. Although they produced bronze implements, they needed various kinds of tools for agriculture and craft production. The Harappans used chert blades, copper objects, and bone and ivory tools. The tools of points, chisels, needles, fishhooks, razors, weighing pans, mirror and antimony rods were made of copper. The chert blades made out of Rohrichert was used by the Harappans. Their weapons include arrowheads, spearhead, celt and axe. They did not have the knowledge of iron.

The Harappans wore clothes and used metal and stone ornaments. They had knowledge of cotton and silk. The image identified as a priest is depicted wearing a shawl-like cloth with flower decorations.

The terracotta images of women are shown wearing different types of ornaments. The image of dancing girl found at Mohenjo-Daro is shown wearing bangles in large numbers up to the upper arm. They made carnelian, copper and gold ornaments. Some of them had etched designs and they exported them to the Mesopotamian world. Faience, stoneware and shell bangles were also used. The ornaments produced were either sold or exchanged as part of the trade activities.

One of the sources of Harappan economy was trade and exchange activities. Harappans had close trade contacts with the Mesopotamians and also with various cultures of India. The Harappan seals and materials have been found in the Sumerian sites in Oman, Bahrain, and Iraq and Iran. The cuneiform inscriptions mention the trade contacts between Mesopotamia and Harappans. The mention of “Meluhha” in the cuneiform inscriptions refers to the Indus region. A Harappan jar has been found in Oman. Harappan seals, weights, dice and beads are found in Mesopotamia. Carnelian, lapis lazuli, copper, gold and varieties of wood were exported to Mesopotamia. Harappans also interacted with various regions of India and acquired raw materials and processed them.

Harappans had developed proper weights and measures. Since they were involved in commercial transactions, they needed standard measures. Cubical chert weights have been unearthed from Harappan sites.

The seals from various media such as steatite, copper, terracotta and ivory are frequently found in the Harappan sites. The Harappan script has not yet been convincingly deciphered. About 5,000 texts have been documented from the Harappan sites. The longest text has about twenty six signs. Some scholars are of the view that it is Dravidian. Seals might have been used as an identity marker on the materials that were transported. They might have indicated the ownership. 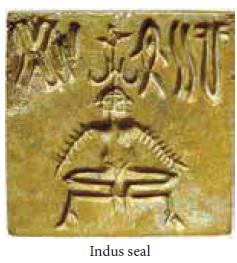 The terracotta figurines, the paintings on the pottery, and the bronze images from 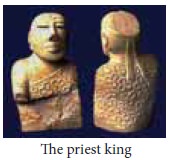 The Harappan sites suggest the arstistic nature of the harappans. “Priest King” of steatite, dancing girl of copper(both from Mohenjo-Daro) , and stone sculptures from Harappa, Mohenjo-Daro and Dholavira are the important objects of art. Toy carts, rattles, wheels, tops, marbles and hop scotches exhibit the amusement of the Harappan people.

The Indus people worshipped nature. They worshipped the pipal tree. Some of the terracotta figures appear to be mother goddess. Fire altars have been identified at Kalibangan. They buried the dead. Burials were made elaborately and evidence of cremation is also reported. The Harappan burials have pottery, ornaments, jewellery, copper mirrors and beads. These suggest their belief in an afterlife. 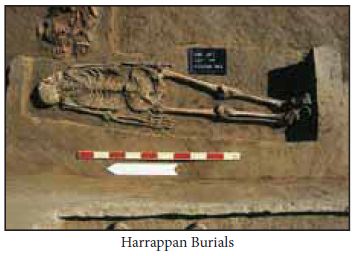 Authorship and the Making of Indian Culture

One school of thought argues that the authors of Harappan Civilisation were speakers of the Dravidian languages. The archaeological evidence shows movement of the Harappans to the east and the south after the decline of their civilisation. Some of the Harappan people could have moved into different parts of India. However, only the decipherment of the script would give us a definite answer.

Contemporary Cultures of the Indus Civilisation

Several groups including pastoral people, farmers and hunter-gatherers lived in the Indus region. The Indus region had villages and large towns. The population of that time was mixed. Innumerable communities of hunters-gatherers, pastoral people and farmers, from Kanyakumari to Kashmir and Gujarat to Arunachal Pradesh could have existed during this period. Their history is also equally important, as cultural and ecological knowledge of all these groups contributed to Indian culture.

While the Indus Civilisation was flourishing in the north-western part of India, several cultures were developing in different parts of India. In the southern part of the subcontinent, Kerala and Sri Lanka were given to hunting and gathering. The Harappans who had knowledge of water crafts might have had connections and interactions with South India, but no clear archaeological evidence on this is available. The northern part of South India, i.e. the Karnataka and Andhra region, had Neolithic cultures, engaged in pastoralism and plough agriculture. Similarly, the Chalcolithic cultures were prevalent in Deccan and western India, while Neolithic cultures permeated northern India including Kashmir, Ganges valley and central and eastern India. Thus India was a cultural mosaic during the time of the Harappans.

The Indus Valley Civilisation declined from about 1900 BCE. Changes in climate, decline of the trade with the Mesopotamia, and the drying of the river and water resources due to continuous drought are some of the reasons attributed by historians for the decline. Invasions, floods and shifting of the river course are also cited as reasons for the ruin of Indus civilisation. In course of time, the people shifted to the southern and eastern directions from the Indus region.