Early India | History - Early Neolithic Cultures and the Beginning of Agriculture | 11th History : Chapter 1 : Early India: From the Beginnings to the Indus Civilisation

Chapter: 11th History : Chapter 1 : Early India: From the Beginnings to the Indus Civilisation

Early Neolithic Cultures and the Beginning of Agriculture

The Neolithic period marked the beginning of agriculture and animal domestication.

Early Neolithic Cultures and the Beginning of Agriculture

The Neolithic period marked the beginning of agriculture and animal domestication. It is an important phase in Indian history. Early evidence of Neolithic culture is found in the Fertile Crescent region of Egypt and Mesopotamia, the Indus region, the Ganges valley of India and also in China. Between 10,000 BCE to 5000 BCE, agriculture emerged in these regions, which led to several cultural developments. 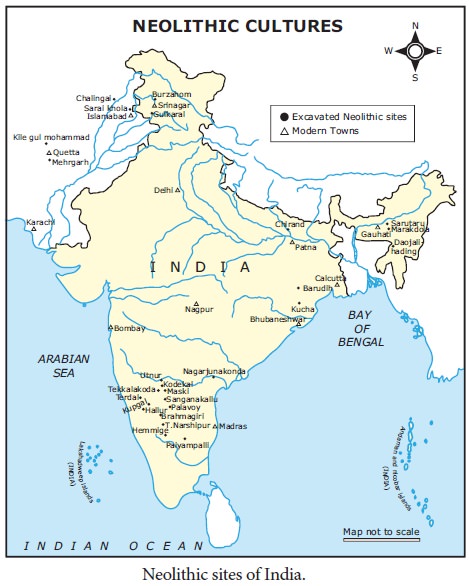 The introduction of domestication of animals and plants resulted in the production and supply of a large quantity of grains and animal food. The fertile soil deposited by the rivers enhanced the growth of agriculture, generating a surplus of grains. Surplus food production played a major role in the rise of early civilisations. Large villages came to exist and pottery developed. Permanent residences were built. Hence, the cultural developments of this period are called Neolithic revolution.

The Neolithic Culture of North-Western India

The Neolithic culture of north-western India is the earliest to have evidence of plant and animal domestication in India. Mehrgarh, Rana Ghundai, Sarai Kala and Jalilpur are some of the Neolithic sites. These sites are now situated in Pakistan.

The site of Mehrgarh has produced evidence of early Neolithic times, dating to c. 7000 BCE. Wheat and barley were cultivated and sheep, goat and cattle were domesticated. This culture preceded the Indus Civilisation.

The first cultural period (I) of the Neolithic age at Mehrgarh dates from c. 7000 to 5500 BCE. The people belonging to this age did not use pottery, but cultivated six-row barley, emmer and einkorn wheat, jujube, ilanthai and dates, and also domesticated sheep, goat and cattle. They were semi-nomadic, pastoral groups. They built their houses with mud and buried the dead. They used ornaments of sea shell, limestone, turquoise, lapis lazuli and sandstone.

The period II at Mehrgarh dates from c. 5500 to 4800 BCE and the period III from 4800 to 3500 BCE. There is evidence for pottery during these periods. Terracotta figurines and glazed faience beads have been found. Evidence for ornaments on women has been uncovered. Long-distance trade was practiced, as revealed by Lapis Lazuli, which is available only in Badakshan. The town was abandoned after the rise of mature phase of the Indus Civilisation.

The Neolithic Culture of Kashmir

Neolithic culture in Kashmir region was contemporary to the Harappan civilisation. Burzahom, an important site of this culture, provides evidence for the Megalithic and Early Historic Periods. In this place, people lived in pit houses (about four metres in depth) in order to escape the cold weather.

The houses were oval in shape, wide at the bottom and narrow on the top. Postholes used for constructing a thatched structure were found around the pit houses. The Neolithic period of Kashmir had domestic sheep, goat and cultivated plants. The Neolithic people of Burzahom traded with the people of the Harappan Civilisation. They used handmade pottery. They used tools such as stone axes, chisels, adzes, pounders, mace-heads, points and picks. Awls were used for stitching skins into clothes to beat the weather. Scrapers were used for working the skins.

Two phases of Neolithic culture have been identified. They are termed aceramic and ceramic phases. Aceramic phase did not have evidence of ceramics. Ceramic phase shows evidence for the existence of pottery. In the ceramic phase, people built mud houses. They used copper arrowheads. They also used black ware pottery, beads of agate and carnelian and painted pottery. A burial at this site produced wild dog bone and antler horn. An engraving of a hunting scene is depicted on a stone here with dog and sun.

Seeds of wheat, barley, common pea and lentil have been recovered from the excavations. people domesticated animals include cattle, sheep, goat, pig, dog and fowl. Bones of wild animals such as red deer, Kashmir stag, ibex, bear and wolf suggest that they hunted animals. There is evidence of menhirs and the use of redware pottery and metal objects in the megalithic culture. The use of lentil suggests that contacts had been established with Central Asia. These people had interactions with Harappan Civilisation.

The Neolithic Culture of Ganges Valley and Central India

In the Ganges Valley, and in Central India Neolithic sites are found at Lehuradeva, and Chopani Munda. The site of Lehuradeva has produced early evidence of rice cultivation dated to c. 6500 BCE.

These sites are characterised by cord-marked pottery. Koldiwa, Chirand, Senuwar and Mahagara are important Neolithic sites in this region. These sites also have evidence of pottery and plant and animal domestication.

Evidence for the cultivation of hulled and six-rowed barley, several types of wheat, rice, pea, green gram, and gram/chicken pea, mustard, flax/linseed and jackfruit have been found at the sites of Central India. Sheep, goat and cattle bones have been found besides bones of wild animals.

The Neolithic people used a type of pottery with cord impression on the surfaces. They used microliths, bone and antler tools and terracotta objects. These sites perhaps flourished till about the middle of the second millennium BCE.

The Neolithic Culture of Eastern India

The Neolithic sites are found at many sites in Bihar and West Bengal. Birbhanpur and Chirand are some of the prominent Neolithic sites in this region along with Kuchai, Golbaisasan and Sankarjang. These cultures show similarities with the Neolithic complexes of east and South-east Asia. Pointed butt celts, chisel and shouldered axes have been found in the region from the Neolithic era.

The Neolithic cultures of South India have been found mainly in Andhra Pradesh and Karnataka and the north-western part of Tamil Nadu.

These sites have ash mounds in the centre with settlements around them. More than 200 Neolithic sites have been identified as part of the Neolithic complex. These sites are found near the granite hills with water sources. These sites have been spotted in the river valleys of Godavari, Krishna, Pennaru, Tungabhadra and Kaveri. Sanganakallu, Tekkalakota, Brahmagiri, Maski, Piklihal, Watkal, Hemmige and Hallur in Karnataka, Nagarjunakonda, Ramapuram and Veerapuram in Andhra Pradesh and Paiyyampalli in Tamil Nadu are the major Neolithic sites in South India.

Some early Neolithic sites have ash mounds. Utnur and Palvoy in Andhra Pradesh and Kodekal, Kupgal and Budihal in Karnataka feature ash mound sites. Soft ash and decomposed cow dung layers are also found at this site. The evidence of habitation in the form of houses and burials are found around the ash mounds. 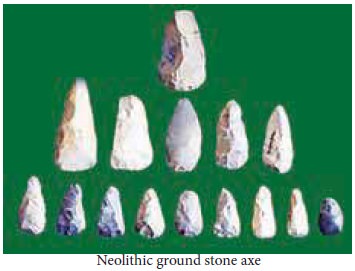 In north-eastern India, Neolithic culture appears at to a very late period. The Neolithic cultures of north-eastern India generally date from 2500-1500 BCE or even later. Shouldered axes and splayed celts have been found at the sites in Assam, Meghalaya, Nagaland and Arunachal Pradesh. Daojali Hading and Sarutaru are the Neolithic sites in the Assam region. This region bears evidence for shifting cultivation. Cultivation of yams and taro, building stone and wooden memorials for the dead, and the presence of Austro-Asiatic languages are the marked features of this region, which shows cultural similarities with South-east Asia.