Chapter: 11th History : Early India: From the Beginnings to the Indus Civilisation

The period before the development of script is called the pre-historic times. It is also referred to as the Stone Age. When we talk about the Stone Age, we include the entire South Asia, the region covering India, Pakistan, Sri Lanka, Nepal and Bangladesh, as a whole.

Human ancestors are likely to have first evolved in Africa and later migrated to different parts of the world. The earliest human ancestor species to migrate out of Africa was the Homo erectus. Till the end of the 20th century, the pre-history of India was considered to have begun within the time span of one million years (MYR) ago. But, recent investigations have produced evidence for the presence of human ancestors in India between two million and one million years ago.

Generally, the period before the invention of script is broadly divided into Stone Age, Bronze Age and Iron Age. Hence, the names of materials that they used (for example, painted grey ware culture or Iron Age culture) or the geographical region (Indus) or the first site to be identified (for example, Acheulian or Harappan) are used to name the cultures.

The earliest age in history is called Old Stone Age or Palaeolithic. This period is divided into

The earliest lithic artefacts come from different parts of the Indian subcontinent. During the Lower Palaeolithic cultural phase, human ancestor species of Homo erectus is believed to have lived in India. The first Palaeolithic tools were identified at the site of Pallavaram near Chennai by Robert Bruce Foote in 1863. He found many pre-historic sites when he extensively surveyed different parts of South India. Since then, numerous Palaeolithic sites have been identified and excavated all over India.

The study of pre-history mainly depends upon lithic tools. Pre-historic sites are identifiable based on the presence of stone tools. Human ancestors made large stone blocks and pebbles and chipped tools out of them, using another strong stone. Hand axes, cleavers, choppers and the like were designed in this way by flaking off the chips. The tools show well thought-out design and physical symmetry, and convey high-quality cognitive (perception) skills and capabilities of pre-historic humans. They used the tools for hunting, butchering and skinning the animals, breaking the bones for bone marrow and to recover tubers and plant foods, and for processing food.

The industries of Palaeolithic cultures are divided into the Early, Middle and Late Acheulian Industries. The early Acheulian tools include polyhedrons, spheroids, hand axes, cleavers and flake tools.

The Acheulian tradition is absent in the Western Ghats, coastal areas and north-eastern India. Heavy rainfall is attributed to its absence. Uncongenial conditions and lack of raw materials might have prevented the occupation of these areas. Perhaps there was no necessity for the pre-historic people to move into these areas. These sites are found more in Central India and in south-eastern part of India (near Chennai). These areas receive high rainfall and are therefore endowed with thick green cover and rich resources.

Lower Palaeolithic tools are found in most parts of India, except in a few regions of the Ganges valley, southern Tamil Nadu and in the hilly areas of the Western Ghats. Athirampakkam, Pallavaram and Gudiyam near Chennai, Hunsgi valley and Isampur in Karnataka, and Bhimbetka in Madhya Pradesh are some important Palaeolithic sites where the Acheulian tools are found.

Recent research places the beginning of lower Palaeolithic around two million years ago. This culture continued upto 60,000 years ago.

Unlike Africa, evidence of hominin [immediate ancestor of Homo Sapiens] fossil is rare in India. There is a report of a fossil fragment discovered by Robert Bruce Foote from Athirampakkam. Its whereabouts are not known now. The only well-known hominin fossil of India was found at Hathnora near Hoshangabad in Madhya Pradesh. The cranium is named Narmada human. A partly preserved hominid skull cap was found in a basal conglomerate deposit in 1982. It is considered to represent the Archaic Homo sapiens. It is the only existing fossil find of human ancestors in India.

Animal fossils are useful to understand the palaeo-environmental context in which people lived. In the Narmada valley, animal fossils of Elephas namadicus (giant tusked pre-historic elephant), Stegodon ganesa (a giant pre-historic elephant), Bos namadicus (wild cattle) and Equus namadicus (extinct great horse like animal) have been recovered. Teeth of Equus, evidence of water buffalo and nilgai as well as 17 animal hoof prints have been uncovered at Attirampakkam.

They suggest an open, wet landscape near the Chennai region in the pre-historic period.

The people of Lower Palaeolithic culture hunted animals and gathered roots, nuts and fruits. They fed on the flesh and bones of animals killed by predators. They lived in open air, river valleys, caves and rock shelters, as seen from evidence in Bhimbetka in Madhya Pradesh and Gudiyam near Chennai. The pre-historic human ancestors, who belonged to the species of Homo erectus, did not have a complex language culture like us, the Homo sapiens. They may have expressed a few sounds or words and used a sign language. They were intelligent enough to select stones as raw material and used the hammer stones to carefully flake the rocks and design tools.

The tool types of the Middle Palaeolithic period are hand axes, cleavers, choppers, chopping tools, scrapers, borers and points, projectile points or shouldered points ,and knives on flakes. Flake industry was predominant in the Middle Palaeolithic period and tools such as scrapers, points and borers were made. Scrapers were used for wood and skin working.

The Middle Palaeolithic sites are found in Narmada, Godavari, Krishna, Yamuna and other river valleys.

Ways of Life and Main Characteristics

The cultural phase that followed the Middle Palaeolithic is called Upper Palaeolithic. This period is marked by innovation in tool technology and increased cognitive capability of humans. The modern humans, who first evolved in sub-Saharan Africa, sometime before 300,000 years ago, migrated to and occupied various parts of Asia around 60,000 years ago. They probably replaced the earlier populations. There is a possibility that these new groups were responsible for the Upper Palaeolithic culture of India.

The lithic industry of the Upper Palaeolithic period is based on blade and bone tool technologies. Microliths (tiny stone tools) were introduced in the Upper Palaeolithic Period and these tools were made using different varieties of silica-rich raw materials. Bone tools and faunal remains have been found in Kurnool caves in Andhra Pradesh.

The Upper Palaeolithic culture is represented in India at several sites. A time bracket of c. 40,000 years to 10,000 years BP is suggested for this period.

T he people of this period used caves as well as the open air space for living. Meralbhavi in Karnataka, Kurnool caves and Godavarikhani in Telangana, Baghor I and Baghor III of Son Valley in Madhya Pradesh and Patne in Maharashtra are some of the Upper Palaeolithic sites of India.

Sri Lanka has evidence of microliths and hominin fossils. Incised ostrich eggshell, and shell and stone beads have been found at Jwalapuram in Andhra Pradesh, Patne in Maharashtra and Batadomba-Lena and Fa Hien Cave in Sri Lanka. 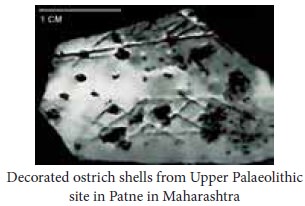 Ways of Life and Main Characteristics

Mesolithic sites are found in most parts of India.They occur in all eco-zones from the coasts to the hills: sand dunes, rock shelters, deltaic regions, lake areas, forested territories, hilly and mountainous areas, rocky terrains and coastal environments.

Coastal sites are seen at Mumbai, teri sites of Thoothukudy in Tamil Nadu and Vishakapatnam, which have microlithic evidence.

After the Ice Age, with the advent of global warming, human groups became highly mobile and began to occupy various eco-zones. The monsoon pattern had already emerged. Some regions witnessed higher rainfall. At Didwana in western Rajasthan, fresh water lakes were known to exist between 10,000 and 3500 BP. The animal bones from this period suggest a dry deciduous type of forest during the Mesolithic period.

The date of the Mesolithic culture varies in different parts of the world. This culture is assigned to pre-agricultural times in certain areas. In Levant (Eastern Mediterranean), they are dated between 20,000 and 9500 BCE. In India, Mesolithic cultures appeared around 10,000 BCE. In certain parts of India including Kerala and Tamil Nadu, it continued up to 1000 BCE, till the beginning of the Iron Age. In Sri Lanka, the microliths appeared about 28,500 years BP.

Hunting wild animals and gathering plant food and fishing were people’s main occupation during this age. Agriculture was not practised in the early stages. At the end of the Mesolithic period, humans domesticated animals and paved the way for the Neolithic way of life. The rock paintings of Central India depict hunting, trapping, fishing and plant food collection.

The faunal evidence from this period shows that people belonging to this period hunted cattle, gaur, buffalo, barasingha, porcupines, sambar, chital, gazelle, hog deer, nilgai, jackal, turtle, fish, wild hare, lizard fox and monitor lizard. Bones of rhinoceros and elephant have also been found. They used spears, bow and arrow and traps. The paintings of Bhimbetka show that various animals were hunted and for this men and women went together.

The people used fire and perhaps roasted food. Domestic animal bones of cattle, sheep, goats, pig and dog have been found at Kanewal, Loteshwar and Ratanpur, and from Adamgarh and Bhimbetka in Madhya Pradesh sites. Camel bones have been found from Kanewal.

The Mesolithic people were highly mobile. They moved in search of animals and plant foods. They made temporary huts and also used caves and rock shelters. Circular huts with postholes and burnt clay lumps bearing reed impressions have been found. Many of caves and shelters feature paintings. Circular huts are seen in rock paintings. The temporary huts were built using perishable materials. Traces of oval and circular huts and possible wattle daub are found in Chopani Mando and Damdama in Uttar Pradesh and Bagor and Tilwara in Rajasthan.

The Mesolithic people buried the dead, which suggests their beliefs and humane relationships. Human skeletons have been found in Mahadaha, Damdama and Sarai Nahar Rai in Uttar Pradesh. At Mahadaha, a man and a woman were buried together. One burial had an ivory pendant as the grave good.

Art is an integral part of human existence. While evidence of art is found in Europe in large volume, they are found only at a few sites in India. A chert stone used as a core had geometric engravings from Chandravati in Rajasthan, bone objects from Bhimbetka and human tooth engraved with geometric design. Rock paintings are found in the rock shelters of Madhya Pradesh and Central India. They show people hunting, trapping animals and fishing and dancing. Bhimbetka near Bhopal, Raisen and Pachmarhi in Madhya Pradesh and South Mirzapur in Uttar Pradesh are some of the sites. Haematite, an iron-rich stone with traces of rubbing, has been found. These people might have decorated themselves with flowers and leaves.