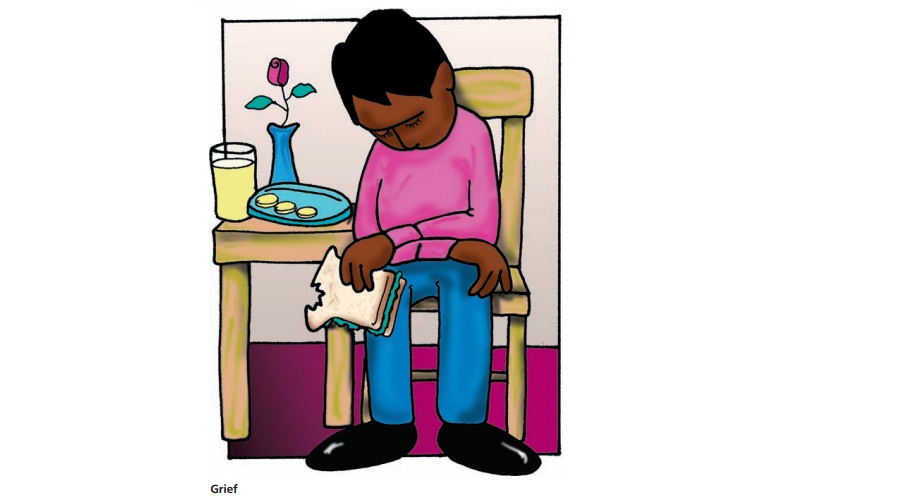 Nurses interact with clients responding to myriad losses along the continuum of health and illness.

Nurses interact with clients responding to myriad losses along the continuum of health and illness. Regardless of the type of loss, nurses must have a basic understanding of what is involved to meet the challenge that grief brings to clients. By understanding the phenomena that clients

experience as they deal with the discomfort of loss, nurses may promote the expression and release of emotional as well as physical pain during grieving. Supporting this process means ministering to psychological—and physical—needs.

The therapeutic relationship and therapeutic commu-nication skills such as active listening are paramount when assisting grieving clients. Recogniz-ing the verbal and nonverbal communication content of the various stages of grieving can help nurses to select interventions that meet the client’s psychological and physical needs. 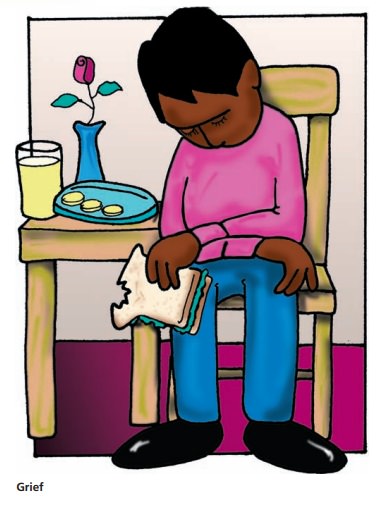 Among well-known theories of grieving are those posed by Elizabeth Kubler-Ross, John Bowlby, George Engel, and Mardi Horowitz.

Elisabeth Kubler-Ross (1969) established a basis for under-standing how loss affects human life. As she attended to clients with terminal illnesses, a process of dying became apparent to her. Through her observations and work with dying clients and their families, Kubler-Ross developed a model of five stages to explain what people experience as they grieve and mourn:

·    Denial is shock and disbelief regarding the loss.

·    Anger may be expressed toward God, relatives, friends, or health care providers.

·    Bargaining occurs when the person asks God or fate for more time to delay the inevitable loss.

·    Depression results when awareness of the loss becomes acute.

·    Acceptance occurs when the person shows evidence of coming to terms with death.

This model became a prototype for care providers as they looked for ways to understand and assist their clients in the grieving process.

John Bowlby, a British psychoanalyst, proposed a theory that humans instinctively attain and retain affectional bonds with significant others through attachment behav-iors. These attachment behaviors are crucial to the development of a sense of security and survival. People experience the most intense emotions when forming a bond such as falling in love, maintaining a bond such as loving someone, disrupting a bond such as in a divorce, and renewing an attachment such as resolving a conflict or renewing a relationship (Bowlby, 1980). An attach-ment that is maintained is a source of security; an attach-ment that is renewed is a source of joy. When a bond is threatened or broken, however, the person responds with anxiety, protest, and anger.

Bowlby described the grieving process as having four phases:

·    Experiencing numbness and denying the loss

·    Reorganizing and reintegrating the sense of self to pull life back together.

·    Shock and disbelief: The initial reaction to a loss is a stunned, numb feeling accompanied by refusal to ac-knowledge the reality of the loss in an attempt to pro-tect the self against overwhelming stress.

·    Developing awareness: As the individual begins to ac-knowledge the loss, there may be crying, feelings of helplessness, frustration, despair and anger that can be directed at self or others, including God or the deceased person.

·    Restitution: Participation in the rituals associated with death, such as a funeral, wake, family gathering, or religious ceremonies that help the individual accept the reality of the loss and begin the recovery process.

·    Resolution of the loss: The individual is preoccupied with the loss, the lost person or object is idealized, the mourner may even imitate the lost person. Eventually, the preoccupation decreases, usually in a year or per-haps more.

·    Recovery: The previous preoccupation and obsession ends, and the individual is able to go on with life in a way that encompasses the loss.

Horowitz’s Stages of Loss and Adaptation

·    Outcry: First realization of the loss. Outcry may be out-ward, expressed by screaming, yelling, crying, or col-lapse. Outcry feeling can also be suppressed as the person appears stoic, trying to maintain emotional con-trol. Either way, outcry feelings take a great deal of energy to sustain and tend to be short-lived.

·    Denial and intrusion: People move back and forth dur-ing this stage between denial and intrusion. During de-nial, the person becomes so distracted or involved in activities that he or she sometimes isn’t thinking about the loss. At other times, the loss and all it represents intrudes into every moment and activity, and feelings are quite intense again.

Working through: As time passes, the person spends less time bouncing back and forth between denial andintrusion, and the emotions are not as intense and over-whelming. The person still thinks about the loss, but also begins to find new ways of managing life after loss.

·    Completion: Life begins to feel “normal” again, although life is different after the loss. Memories are less painful and don’t regularly interfere with day-to-day life. Epi-sodes of intense feelings may occur, especially around anniversary dates, but are transient in nature.

Grieving tasks, or mourning, that the bereaved person faces involve active rather passive participation. It is some-times called “grief work” because it is difficult and requires tremendous effort and energy to accomplish.

Rando (1984) describes tasks inherent to grieving that she calls the “six R’s”:

·    Recognize: Experiencing the loss, and understanding that it is real, it has happened.

·    Recollect and re-experience: Memories are reviewed and relived.

·    Relinquish: Accepting that the world has changed (as a result of the loss), and there is no turning back.

Worden (2008) views the tasks of grieving as follows:

1.     Accepting the reality of the loss: It is common for peo-ple initially to deny that the loss has occurred, it is toopainful to be acknowledged fully. Over time, the person wavers between belief and denial in grappling with this task. Traditional rituals, such as funerals and wakes, are helpful to some individuals.

2. Working through the pain of grief: A loss causes pain, both physical and emotional, that must be acknowl-edged and dealt with. Attempting to avoid or suppress the pain may delay or prolong the grieving process. The intensity of pain and the way it is experienced varies among individuals, but it needs to be experienced for the person to move forward.

3. Adjusting to an environment that has changed because of the loss. It may take months for the person to realize what life will be like after the loss. When a loved one dies, roles change, relationships are absent or different, lifestyle may change, and the person’s sense or identity and self-esteem may be greatly affected. Feelings of fail-ure, inadequacy, or helplessness at times are common. The individual must develop new coping skills, adapt to the new or changed environment, find meaning in the new life, and regain some control over life to con-tinue to grow. Otherwise, the person can be in a state of arrested development and get stuck in mourning.

4. Emotionally relocating that which has been lost and moving on with life. The bereaved person identifies a special place for what was lost and the memories. The lost person or relationship is not forgotten or diminished in importance, but rather is relocated in the mourner’s life as the person goes on to form new relationships, friends, life rituals, and moves ahead with daily life.