The economic depression that began in the aftermath of the US stock market crash was international in character and devastated the world economy.

The economic depression that began in the aftermath of the US stock market crash was international in character and devastated the world economy. During the First World War, while the states of Europe were fighting on the battlefield, Americans were capturing their markets and extending their fields of investment and thereby expanding their own industry and agriculture. By the end of the war America had emerged as the richest nation in the word.

The war placed a heavy burden of debt on every European country. America had lent enormously to war-ravaged European countries. The capital outflow from America had found its outlet in new investments. But these investments would yield desired results only after a period. In the meantime, because of the slump, the US was forced to withdraw its capital exported. The withdrawal of American capital caused decline in the volume and value of exports all over. The effects of this development were accentuated by the US market crash.

Stock Market Crash in the US

The first huge stock market crash occurred on 24 October 1929. This resulted in more and more people selling their shares and disposing of their stocks. But there were no buyers. This was followed by the failure of American banks. American financiers were forced to recall their own funds invested abroad. The stoppage of loans to Germany by America led to the failure of two large German banks. Having lent liberally to banks abroad, the Bank of England too found itself in bankruptcy. 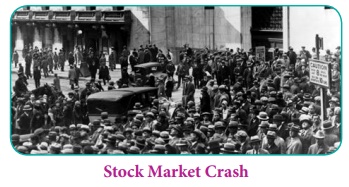 Results of the Depression

Despite emergency measures such as cutbacks in expenditure and increased taxation, the situation did not improve in England. In order to counteract this and to protect domestic markets, each nation adopted a policy of protectionism and devaluation of currency. Devaluation forced creditors to stop lending. This led to a world-wide credit contraction. Thus the defensive measures adopted by various nations led to an unprecedented decline in world economic activity. As its effect was deep and prolonged economists and historians call it the Great Depression.

The Depression changed the political conditions in several countries. In England, the Labour Party was defeated in the general elections of 1931. In the USA, the Republican Party, which had taken credit for the boom preceding the Depression, was rejected by the people in successive elections for about twenty years after the Depression. As we will see below, the Fascist Parties seized government in Italy and Germany. In South America, Argentina, Brazil and Chile saw a change of government.