League of Nations was the brainchild of American president Woodrow Wilson.

League of Nations was the brainchild of American president Woodrow Wilson. It was Wilson’s desire that a League in which the states of the world would join and cooperate for the preservation of peace be established. The Covenant of the League was worked out at the Paris Peace Conference, and included every treaty signed after the First World War. He believed that the defeat of Germany would mean the rejection of militarism and therefore the organisation of a comity of nations to control international relations was necessary rather than the ineffective balance of power. Wilson took personal interest to see that this task was accomplished. 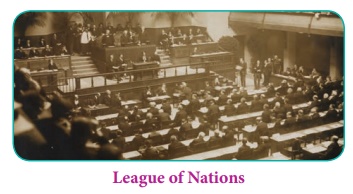 In drawing up the constitution of this organisation, the ideas of Britain and America prevailed. The League consisted of five bodies: the Assembly, the Council, the Secretariat, the Permanent Court of Justice, and the International Labour Organisation. Each member-country was represented in the Assembly. It discussed general policy and any decision taken in the Assembly had to be unanimous. The Council was the executive of the League. Britain, France, Italy, Japan and the United States were originally declared permanent members of the Council. Each member had one vote and since all decisions had to be unanimous, even the small nations, in effect, possessed the right of veto.

The Secretariat of the League of Nations was located at Geneva and the first Secretary General was Sir Eric Drummond from Britain. The International Court of Justice was set up in The Hague. The International Labour Organisation comprised a secretariat and a general conference which included four representatives from each country.

Objectives of the League

The two-fold objective of the League of Nations was to avoid war and maintain peace in the world and to promote international cooperation in economic and social affairs. The League intended to act as conciliator and arbitrator, and thereby resolve a dispute in its early stages. If wars should break out despite arbitration, the members were to apply sanctions to the aggressor - first economic and then military. The difficulty in achieving the objectives was increased from the beginning by the absence of three Great Powers namely USA (did not become a member), Germany (a defeated nation) and Russia. The latter two joined in 1926 and 1934. While Germany resigned in 1933, Russia was expelled in 1939.

Activities of the League

Between 1920 and 1925, the League was called in to settle a number of disputes and was successful in three issues. In 1920 a dispute arose between Sweden and Finland over the sovereignty of the Aaland Islands. The League ruled that the islands should go to Finland. In the following year the League was asked to settle the frontier between Poland and Germany in Upper Silesia, which was successfully resolved. The third dispute was between Greece and Bulgaria in 1925. Greece invaded Bulgaria, and the League ordered a ceasefire. After investigation it decided that Greece was to pay reparations.

The League justified its existence through reduction of international opium traffic and in the control of spread of disease by aiding poor and backward countries. Its agencies collected huge data on labour and business conditions throughout the world. It conducted plebiscites in disputed areas and helped in finding homes for refugees. It made a beginning in codifying international law.

One of the major problems confronting the European powers was how to achieve disarmament. In 1925 the Council of the League set up a commission to hold a Disarmament Conference. But the proposed conference materialised only in 1932. In this Conference, Germany’s demand of equality of arms with France was rejected. Hitler withdrew Germany from the Conference and the League.

The League could do nothing about the seizure of Vilna by Poland in 1920. In 1923, when war threatened to break out between Italy and Greece, Italians refused to submit to the mediation of the League. Japan attacked Manchuria in September 1931 and the League condemned Japan. Japan followed the example of Germany and resigned. In the context of Italy’s attack on Ethiopia, the League applied sanctions. As the sanctions came into effect, Italy in protest resigned from the League in 1937.

Thereafter the League was a passive witness to events, taking no part in the crises over the Rhineland, Austria, Czechoslovakia and Poland. The last decisive action it took was in December 1939 when Russia was expelled for attacking Finland. The Assembly did not meet again and the League of Nations was finally dissolved in 1946.

The League appeared to be an organisation of the victors in the First World War. Though it had a world-wide membership, it was very much the centre of European diplomacy.

Unanimity of members was required for all its decisions on political issues. Since it lacked military power of its own, it could not enforce its decisions.

The founders of this peace organisation underestimated the potential of nationalism. The principle of “collective security’ could not be applied in actual practice.

The League of Nations was shown to have no teeth. It depended wholly on the good will and positive approach of all nations. When Italy, Japan and Germany, headed by dictators, refused to be bound by the orders of the League, Britain and France were the only major powers who had the power to act. But they were not enthusiastic supporters of the League, as it was the brainchild of Wilson.