In the aftermath of the First World War, the issue in most parts of continental Europe was whether the government and the economic system should continue under the control of feudal aristocracies, industrialists and financiers, or a combination of all of them.

In the aftermath of the First World War, the issue in most parts of continental Europe was whether the government and the economic system should continue under the control of feudal aristocracies, industrialists and financiers, or a combination of all of them. But none of these elite classes had won over the masses, especially the peasantry and the labour. The masses in the emerging situation saw an opportunity to overthrow their oppressors. In Russia the bourgeoisie overturned the autocracy in 1917 and were themselves overturned by the Bolsheviks. In Britain the Labour Party handled the situation by opting for a welfare state. The vanquished nations like Italy and Germany switched to fascism though movements which initially had many of the characteristics of mass organisations.

(a) Fascism in Italy

The first of the nations of Western Europe to turn against the old ruling regime was Italy. During World War I Italy mobilised more than five and a half million men, of whom nearly 700,000 were killed. The financial cost of the participation in the War was huge. The country had suffered heavy losses in a war that was unpopular with both socialists and pro-Austrian Catholics. The nationalists were equally unhappy with the marginal gain in territory from the Treaty of Versailles. The War resulted in inflation with consequent rise in prices, speculation and profiteering. There were frequent protests and strikes. People held the rulers of Italy responsible for the humiliation at Versailles.

As hardship increased, socialist ideas began to spread. In 1918 Italian socialists voted to join the Communist International. In the election of November 1919 they won about a third of the seats in the Chamber of Deputies. Radicalism spread even in rural areas. Red Leagues were organised to break up large estates and to force landlords to reduce their rents. To the landowning class fascism was a less dangerous form of radicalism that could save their property from confiscation.

The Rise of Mussolini

Benito Mussolini (1883–1945), was a son of a blacksmith. He qualified as an elementary school master and left for further study in Switzerland but ended up as a journalist with socialist views. He became the editor of Avanti, the leading socialist daily. When the Fascist Party was founded in 1919 Mussolini joined it immediately. As Fascists stood for authority, strength and discipline, support came from industrialists, nationalists, ex-soldiers, the middle classes and discontented youth. Fascists resorted to violence freely and their opponents were attacked with knives, cudgels and guns. 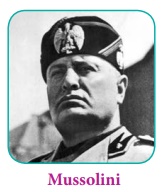 The Fascist dictatorship arose out of the breakdown of the parliamentary government which had proved unable to cope with the disorders following the end of the War. The inability of the Democratic Party leaders to combine and act decisively facilitated Mussolini’s triumph. What threatened to become a civil war between the communists and their opponents was ended by the march of the black-shirted Fascists on Rome (October 1922). Impressed by the show of force, the King Immanuel III invited Mussolini to form a government.

Fascism: The word Fascism derives its origin from the Latin fasces, the ax surrounded by a bundle of rods representing the authority of the Roman state.

‘Fascism is a form of radical authoritarian ultra-nationalism, characterised by dictatorial power, forcible suppression of opposition and strong regimentation of society and of the economy, which came to prominence in early 20th-century Europe’.

In the 1924 elections, after intimidation of the electors, the Fascists won 65 per cent of the votes. Matteotti, a socialist leader, who questioned the fairness of the elections was murdered. The opposition parties boycotted the Parliament in protest. Mussolini reacted by banning opposition parties and censoring the press. Opposition leaders were killed or imprisoned.

Assuming the title of Il Duce (the leader), in 1926 Mussolini became a dictator with power to legislate. He passed a law forbidding strikes and lockouts. Unions and employers were organised into corporations which would settle wages and working conditions. The greater part of the rest of the population was grouped into corporations, according to occupation. These were then organised into national federations and supervised by the Minister of Corporations.

In 1938 Parliament was abolished and was replaced by a body representing the Fascist Party and the corporations. This new arrangement bolstered Mussolini’s dictatorial control of the economy, as well as enabling him to wield untrammelled power as head of the administration and the armed forces. Thus Mussolini destroyed parliamentary government, trade unions and all democratic institutions.

In order to give respectability to the Fascist Party, Mussolini won over the Roman Catholic Church by recognising the Vatican City as an independent state. In return the Church recognised the Kingdom of Italy. The Roman Catholic faith was made the religion of Italy and compulsory religious teaching in school was ordered. The Lateran Treaty incorporating the above provisions was signed in 1929. 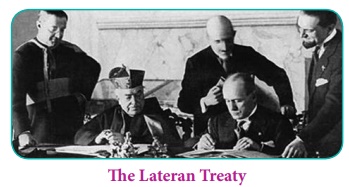 In 1929 the United States plunged into a great financial and commercial slump. The effect on the rest of the world was grave. By 1931 European trade and finance was totally paralysed. Though the Fascist government in Italy could boast of achievements during this period in the much publicised public works – new bridges, roads and canals, hospitals and schools – it could not solve the unemployment problem. By 1935, when the collapse of the League of Nations had become complete, Mussolini in order to have an economic empire for Italy invaded Ethiopia. This was useful to divert attention away from the economic troubles. Mussolini’s success drew admiration from ruling classes elsewhere in Europe. Among them was a rising figure among nationalist, anti-Semitic circles in Munich: Adolf Hitler.

(b) Germany in the post-War

The factors which led to the eventual triumph of Fascism in Germany were many. First was the sense of humiliation arising from the defeat in War. Between 1871 and 1914 Germany had risen to dizzy heights of economic, political and cultural accomplishments. Germany’s universities, its science, philosophy and music were known all over the world. Germany had surpassed even Britain and the US in several fields of industrial production. Then came the crushing defeat in the First World War. The German people were demoralised. The reparations and other clauses in the Treaty of Versailles caused acute discontent and hardship. This was utilised by reactionary forces to spread the idea that Socialists and Jews in the government had let down the nation, and had even caused the Germany’s defeat.

Germany had always been a military state. The army was the symbol not merely of security but of national greatness. Therefore Germany’s defeat and humiliation at the end of World War I caused a deep shock to Germans. The Great Depression further deepened their frustration and prompted them to turn against the Republican government.

Germany after the First World War formed democratic governments through coalition of political parties. Socialist Ebert led the government from 1919-1925 and later. Stresemann as one associated with liberal democrats conducted the governance of the country until 1929. This period, until the rise of the Nazis in 1933, is called the Weimar Republic.

The ordinary German citizen in these years was concerned himself only with the problems of everyday life in an impoverished country under the burden of reparations. The occupation of the Ruhr by the French in 1923 infuriated the workers to organise strikes in protest. It provided an opportunity to certain underground movements to thrive. There was already one in Berlin under Ludendorff, who had organised the former soldiers against the Republican government. There was another in Munich, a former corporal. He was Adolf Hitler, the leader of the National Socialist German Workers’ Party. 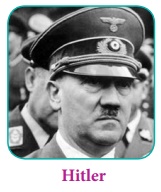 During World War I, Hitler served in the Bavarian army. Hitler had developed an innate hatred against Jews and Marxists. A gifted speaker, he could whip up the passion of the audience. In 1923 Hitler abortively attempted to capture power in Bavaria. His premature launch of the National Revolution on the outskirts of Munich landed him in prison. During his time in prison he worked on Mein Kampf (My Struggle), an autobiographical book containing his political ideas.

In 1929 two things occurred which exposed the weakness of the German government. Stresemann died and there was a political vacuum. The failure of the New York Stock Market triggering economic depression prompted the US to foreclose its German loans. By 1931 the world economic depression had gripped an already feeble Germany. In the Presidential election of 1932 the Communist Party polled about 60,00,000 votes. Alarmed capitalists and property owners tilted towards supporting fascism. Hitler exploited this opportunity to usurp powers.

Republican government in Germany fell, as the Communists refused to collaborate with the Social Democrats. Thereupon industrialists, bankers and Junkers prevailed upon President Von Hindenburg to designate Hitler as Chancellor in 1933 in the hope that they could control him. The Nazi state of Hitler, known as the Third Reich, brought an end to the parliamentary democracy established in Germany after the First World War.

Hitler replaced the flag of the Weimar republic by the swastika banners of National Socialism. Germany was converted into a highly centralised state. All political parties except the Nazi party were declared illegal. The army of brown-shirted and jack-booted storm-troopers was expanded. The Hitler Youth was created, and the Labour Front set up. Trade unions were abolished, their leaders were arrested and all workers were compelled to join the German Labour Front. Strikes were made illegal, wages were fixed by the government, and the Labour Front was used by the Nazis to control industry. Total state control was extended over the press, the theatre, the cinema, radio and over education.

The Nazi Party’s propaganda was led by Joseph Goebbels, who manipulated public opinion through planned propaganda. He once said, ‘any lie frequently repeated will ultimately gain belief.’ The Gestapo or Secret State Police was formed and run by Himmler, who controlled the select bodyguard of Hitler.

Along with the repressive measures, Hitler’s government followed a policy of repressing Jewish people. The Jews were removed from government positions, excluded from the universities and deprived of citizenship. Jewish businesses were closed down, and their establishments were attacked. After the outbreak of World War II concentration camps, barracks surrounded by electrified fences and watch towers, were built where Jews were interred and used as forced labour with less than subsistence nourishment. Later they were turned into extermination camps where industrial means of murder such as gas chambers were used to kill Jews. It is estimated that about 6 million Jews in Europe were killed in what the Nazis termed ‘The Final Solution’. Apart from Jews, the Nazi state also exterminated gypsies, and other itinerant communities, homosexuals and lunatics. Apart from these, several hundreds of thousands of Germans who dissented with Hitler too were killed.

Defiance of the Treaty of Versailles

In August 1934 Hindenburg died and Hitler, apart from being Chancellor, became both President and Commander-in-Chief of the armed forces. By 1938 the Nazi Party had tightened its control over the army. Hitler’s foreign policy aimed at restoring the armed strength of Germany and annulling provisions of Versailles Treaty which undermined Germany. His deliberate attempts to breach the Treaty of Versailles (discussed in the next lesson) led to the outbreak of Second World War.