The most significant outcome of the First World War was the Russian revolution.

The most significant outcome of the First World War was the Russian revolution. The Tsarist government in Russia was faced with unbearable strains in the First World War. People went hungry. Cities and towns were filled with workers who could not be adequately fed and housed. In March 1917, there erupted the first revolution (February Revolution) with strikes and demonstrations in Petrograd. The first revolution did not solve any of Russia’s problems. Though the Russian monarchy was overthrown, the interim government carried on the war. Therefore there was a second great uprising in November (October revolution) in which the Bolsheviks under the guidance of Lenin, seized power and established a communist government in Russia. 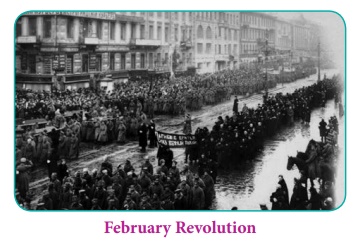 (a) Causes of the Revolution Autocratic Rule of Tsars

In the nineteenth century, Russia was a backward country ruled by a series of autocratic Tsars. They kept Russia economically and socially backward. Serfs were persecuted and lived miserable lives. Anti-Semitism was rife with the persecution and massacre of Jews. There was no space for democratic dissent. Intellectuals, university professors, students, scientists and writers suffered imprisonment and exile for expressing opinions. The Tsars were universally hated and everyone looked forward to their downfall.

(1870–1924): Lenin was born near the Middle Volga. In 1887 his eldest brother was hanged for taking part in an attempt on the Tsar’s life. Influenced by the ideas of Karl Marx, Lenin believed that the way for freedom was through mass action. He spent his time taking classes for study groups of factory workers in St Petersburg on Marxism. Arrested in 1895 he was kept in Siberia. After his release in 1900, he moved from one boarding house to another in the big cities of Europe. In 1903 a congress of forty-three delegates of the Social Democratic Party, the chief party of the left, moved to London. Here the congress split on the issue of organisation and strategy. Lenin gained the support of a small majority (bolshinstvo), known as Bolsheviks, which became the Bolshevik Party. His opponents, in a minority (menshinstvo), were called Mensheviks. 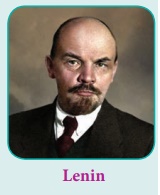 Russia was basically a peasant society. Nearly one-half of the population were serfs tied to the land. Russian peasants were forced to labour on their lords’ lands for a few days every week without any payment, and were not allowed to marry without the consent of the lords. Serfs were punished severely even for minor faults.During the reign of Nicholas I, there were more than five hundred serf riots in various parts of Russia, but they were all crushed ruthlessly. Alexander II issued an edict of emancipation in 1861 and freed the serfs. But they were not provided with land to eke out their livelihood. So the peasants became the combustible material for the revolution.

Russia began to industrialise late. Russia lagged behind all great European powers. Russian workers laboured under oppressive conditions. Trade unions and strikes were completely banned. The Russian working class was looking for an opportunity to protest.

The young, radical and non-gentry intellectuals who waged a merciless war against the Russian state were called Nihilists by their enemies. The first unsuccessful attempt on the life of Tsar Alexander II and innumerable trials that followed dubbing the suspected intellectuals as nihilists and sending them, both men and women, to Siberia did not stop their revolutionary activities in Russia. Revolutionary forces swelled, as many minority groups such as the Jews and Poles joined them.

Nihilism represented a revolt against the established social order. It rejected all authority exercised by the state, by the church and by the family. It based its belief on nothing but scientific truth.

Marxism and Its Influence

Marx and Engels held the firm view that the existence of the bourgeoisie was as necessary a condition for the Socialist revolution as the proletariat. They never envisaged the possibility of a successful Socialist revolution in backward Russia. However, Marxist ideas, apart from other radical ideas such as anarchism and various forms of socialism, gained ground in a situation were living conditions were oppressive. But Marxist groups were in the lead, and in Lenin they found a charismatic leader with great organisational skills.

Autocracy of the Tsar Nicholas II

Tsar Nicholas II of the Romanov dynasty had little experience of government. His wife Alexandra was a dominant personality and Nicholas was under her strong influence. Determined that Russia should not be left out in the scramble for colonial possessions, Nicholas encouraged Russian expansion in Manchuria, provoking a war with Japan in 1904. The resulting Russian defeat led to strikes and riots. Opposition to the Tsar grew. 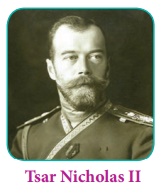 On 23 January 1905 Father Gapon, organised a march of men, women and children. The processions were peaceful and unarmed, with demands for a representative national assembly, and agrarian and industrial reforms. But police and soldiers fired on the procession. Hundreds were killed and many thousands wounded. The events of this day (known as Bloody Sunday) led to riots, strikes and violence in which the governor-general of Moscow, was killed by a bomb.

Nicholas was forced to grant a constitution and establish a parliament, the Duma. This was no longer satisfactory to the left-wing parties that formed a soviet (council) of workers’ delegates in St Petersburg. Similar soviets were set up in other cities. The Duma gave the middle classes, a voice in government. So the moderates were supportive of the government’s policy, while the left wing continued their opposition. But whenever the Duma opposed any initiative of the Tsar, it was dissolved and fresh elections were held. Without change of government policy, the fourth Duma ended with the revolution of 1917.

Opposition to the Tsar and Dissolution of Duma

The outbreak of the First World War had temporarily strengthened the monarchy, as Russia was allied to France and Britain. As there was a rumour of a palace revolution, Nicholas made himself the Commander-in-Chief of his army and was making a mess of everything. Towards the end of 1916, Rasputin, a domineering influence over the Tsar and the Tsarina, was murdered creating a crisis in the palace. Members of the St. Petersburg Soviet were arrested.

As late as on 23 February 1917, when the socialists celebrated International Working Women’s Day, the Tsar seemed unchallengeable. But he had to abdicate on the morning of 2 March. Though none called for strikes, the bread shortages among women textile workers, with their husbands in the army, forced them to go on strike anyway and march through the factory areas of Petrograd. Masses of women workers in a militant frame of mind demanding “Bread for workers” waved their arms towards factory workers and shouted “Come out!” “Stop work!” The city’s 400,000 workers joined the movement the next day (24 February).

The government used the military to break the strike. But on the fourth day of strikes and demonstrations mutinies broke out even in the barracks. The Tsar declared martial law. But his order was not broadcast in the city, as there was no one to do this job. The Tsar then tried to return to Petrograd. The railway workers stopped his train on the way. Frightened by these developments, the generals at the front and some leaders in Petrograd, pleaded with the Tsar to abdicate. On 15 March, a week after the popular uprisings, Nicholas II abdicated.

There were two parallel bodies to take on government functions. One consisted of bourgeois politicians of the old state Duma, representing the propertied classes. On the other were the workers’ delegates drawn together in a workers’ council, or Soviet. The soviets were influenced by the underground left-wingers. Those in the Duma were able to form a provincial government with the consent of the soviets. The soviets were dominated by Mensheviks and the minority Bolsheviks were undecided. The situation changed with the arrival of Lenin.

Failure of the Provisional Government

Lenin was in Switzerland when the revolution broke out. Lenin wanted continued revolution. His slogan of ‘All power to the Soviets’ soon won over the workers’ leaders. Devastated by war time shortages, the people were attracted by the slogan of ‘Bread, Peace and Land.’

The Provisional government made two grave mistakes. It postponed a decision on the demand for the redistribution of land apart from deciding to continue with the war. Frustrated peasant soldiers deserted their posts and joined those who had resorted to land grabbing. This intensified the rising in Petrograd led by the Bolsheviks. The government banned the newspaper Pravda and arrested all Bolsheviks except Lenin who was in hiding in Finland. Leon Trotsky was also arrested. Kerensky became prime minister, leading a new coalition of liberals and moderate Socialists. Faced with an attempted coup Kerensky tried to dismiss both the government and the Soviet. His attempts were frustrated by the Soviet and particularly by the Bolsheviks who had by then attained popularity.

Pravda is a Russian word meaning “Truth”. It was the official newspaper of the Communist Party of the Soviet Union from 1918 to 1991.

Takeover by the Bolshevik Party under Lenin’s leadership

In October Lenin persuaded the Bolshevik Central Committee to decide on an immediate revolution. Trotsky prepared a detailed plan. On 7 November key government buildings, including the Winter Palace and the Prime Minister’s headquarters, were seized by armed factory workers and revolutionary troops. On 8 November 1917 a new Communist government was in office. Its head was Lenin. The Bolshevik Party was renamed the Russian Communist Party.

Outcome of the Revolution

Lenin thought the most important factor for the fall of the Provisional government was its failure to withdraw from the War. So Lenin immediately appealed for peace. Unmindful of the harsh terms dictated by the Central Powers, Lenin opted for withdrawing from the War to concentrate on the formation of a new government. In March 1918 the Treaty of Brest– Litovsk was signed. 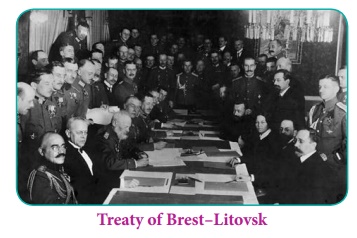 Influence of the Russian Revolution

The revolution fired people’s imagination across the world. In many countries, communist parties were formed. Soviet Union encouraged the colonies to fight for their freedom and gave all out support to them. Debates over key issues, land reforms, social welfare, workers’ rights, gender equality started taking place in a global context.

The rapid progress made by the Soviet Union in the decades after the revolution inspired backward countries across the world, and provided an alternative to capitalism. Illiteracy and poverty were eliminated in record time. Industry and agriculture developed remarkably, and the Great Depression which affected the entire world made no impact on the USSR. Women were given equal rights. Industries and banks were nationalised. Land was declared as social property and distributed among poor peasants.