The Genetic Code and Protein Synthesis

The structure of DNA, RNA, and protein was described. We will review some of the essentials here, and go a step further with a simple description of how all of these organic molecules are involved in the process of protein synthesis.

THE GENETIC CODE AND PROTEIN SYNTHESIS

The structure of DNA, RNA, and protein was described. We will review some of the essentials here, and go a step further with a simple description of how all of these organic molecules are involved in the process of protein synthesis.

DNA AND THE GENETIC CODE

DNA is a double strand of nucleotides in the form of a double helix, very much like a spiral ladder. The uprights of the ladder are made of alternating phos-phate groups and deoxyribose sugar molecules. The rungs of the ladder are made of the four nitrogenous bases, always found in complementary pairs: adenine with thymine (A–T) and guanine with cytosine (G–C). Although DNA contains just these four bases, the bases may be arranged in many different sequences (reading up or down the ladder). It is the sequence of bases, the sequence of A, T, C, and G, that is the genetic code. The DNA of our 46 chromosomes may also be called our genome, which is the term for the total genetic information in a particular species. The human genome is believed to contain about 3 billion base pairs, and the number of our genes is now esti-mated to be between 20,000 and 25,000 (or perhaps as many as 30,000, but much lower than previously thought). 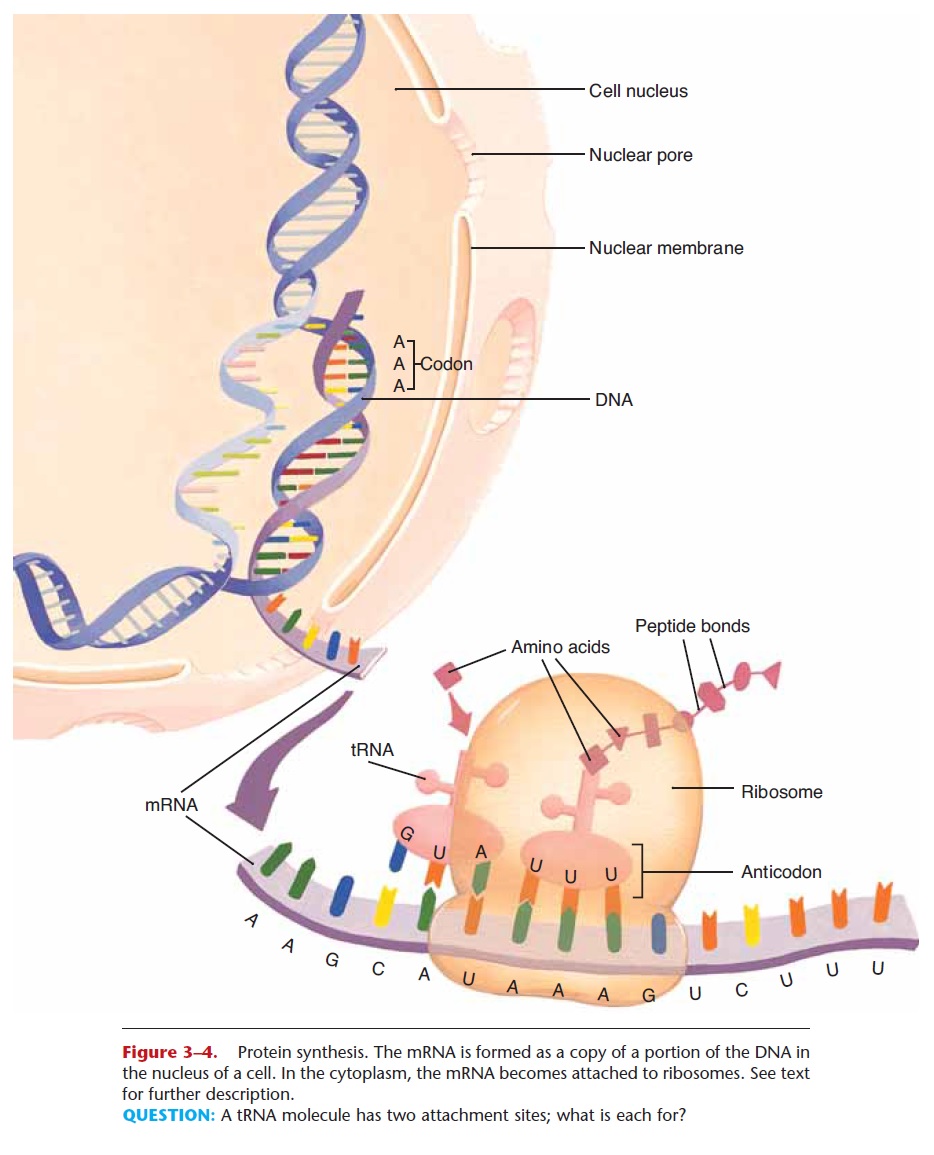 Figure 3–4. Protein synthesis. The mRNA is formed as a copy of a portion of the DNA in the nucleus of a cell. In the cytoplasm, the mRNA becomes attached to ribosomes. See text for further description.

QUESTION: A tRNA molecule has two attachment sites; what is each for?

Recall that you read that a gene is the genetic code for one protein. This is a simplification, and the functioning of genes is often much more com-plex. We have genes with segments that may be shuf-fled or associated in many combinations, with the potential for coding for many more proteins. A full explanation is beyond the scope of our book, so for the sake of simplicity, and in the following discussion, we will say that a gene is the code for one protein. Recall too that a protein is a specific sequence of amino acids. Therefore, a gene, or segment of DNA, is the code for the sequence of amino acids in a particular protein.

The code for a single amino acid consists of three bases in the DNA molecule; this triplet of bases may be called a codon (see Fig. 3–4). There is a triplet of bases in the DNA for each amino acid in the protein. If a protein consists of 100 amino acids, the gene for that protein would consist of 100 triplets, or 300 bases. Some of the triplets will be the same, since the same amino acid may be present in several places within the protein. Also part of the gene are other triplets that start and stop the process of making the protein, rather like capital letters or punctuation marks start and stop sentences.

RNA, the other nucleic acid, has become a surprising molecule, in that it has been found to have quite a few functions. It may be involved in the repair of DNA, and it is certainly involved in gene expression. The expression of a gene means that the product of the gene is somehow apparent to us, in a way we can see or measure, or is not apparent when it should be. Examples would be having brown eyes or blue eyes, or having or not having the intestinal enzyme lactase to digest milk sugar. Although these functions of RNA are essential for us, they too are beyond the scope of our book, so the roles of RNA in the process of pro-tein synthesis will be our focus.

The transcription and translation of the genetic code in DNA into proteins require RNA. DNA is found in the chromosomes in the nucleus of the cell, but protein synthesis takes place on the ribosomes in the cytoplasm. Messenger RNA (mRNA) is the intermediary molecule between these two sites.

When a protein is to be made, the segment of DNA that is its gene uncoils, and the hydrogen bonds between the base pairs break (see Fig. 3–4). Within the nucleus are RNA nucleotides (A, C, G, U) and enzymes to construct a single strand of nucleotides that is a complementary copy of half the DNA gene (with uracil in place of thymine). This process is tran-scription, or copying, and the copy of the gene is mRNA, which now has the codons for the amino acids of the protein, and then separates from the DNA. The gene coils back into the double helix, and the mRNA leaves the nucleus, enters the cytoplasm, and becomes attached to ribosomes.

As the copy of the gene, mRNA is a series of triplets of bases; each triplet is a codon, the code for one amino acid. Another type of RNA, calledtransfer RNA (tRNA), is also found in the cytoplasm. Each tRNA molecule has an anticodon, a triplet comple-mentary to a triplet on the mRNA. The tRNA molecules pick up specific amino acids (which have come from protein in our food) and bring them to their proper triplets on the mRNA. This process is translation; that is, it is as if we are translating from one language to another—the language of nucleotide bases to that of amino acids. The ribosomes contain enzymes to catalyze the formation of peptide bonds between the amino acids. When an amino acid has been brought to each triplet on the mRNA, and all peptide bonds have been formed, the protein is finished.

The protein then leaves the ribosomes and may be transported by the endoplasmic reticulum to wherever it is needed in the cell, or it may be packaged by the Golgi apparatus for secretion from the cell. A sum-mary of the process of protein synthesis is found in Table 3–3.

Thus, the expression of the genetic code may be described by the following sequence:

Each of us is the sum total of our genetic charac-teristics. Blood type, hair color, muscle proteins, nerve cells, and thousands of other aspects of our structure and functioning have their basis in the genetic code of DNA.

If there is a “mistake” in the DNA, that is, incorrect bases or triplets of bases, this mistake will be copied by the mRNA. The result is the formation of a malfunc-tioning or non-functioning protein. This is called a genetic or hereditary disease.