Cytoplasm is a watery solution of minerals, gases, organic molecules, and cell organelles that is found between the cell membrane and the nucleus.

Cytoplasm is a watery solution of minerals, gases, organic molecules, and cell organelles that is found between the cell membrane and the nucleus. Cytosol is the water portion of cytoplasm, and many chemical reactions take place within it. Cell organelles are intracellular structures, often bounded by their own membranes, that have specific functions in cellular metabolism. They are also shown in Fig. 3–2. 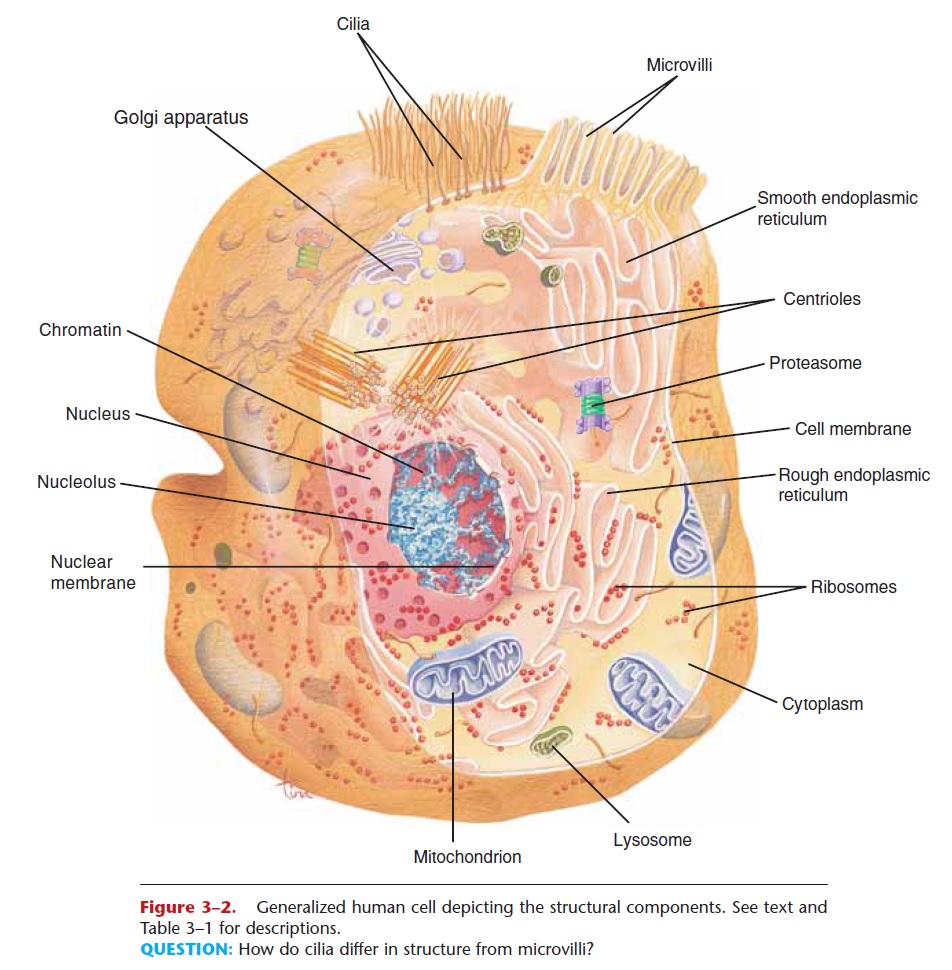 The endoplasmic reticulum (ER) is an extensive network of membranous tubules that extend from the nuclear membrane to the cell membrane. Rough ER has numerous ribosomes on its surface, whereas smooth ER has no ribosomes. As a network of inter-connected tunnels, the ER is a passageway for the transport of the materials necessary for cell function within the cell. These include proteins synthesized by the ribosomes on the rough ER, and lipids synthesized by the smooth ER.

Ribosomes are very small structures made of pro-tein and ribosomal RNA. Some are found on the sur-face of rough ER, while others float freely within the cytoplasm. Ribosomes are the site of protein synthesis. The proteins produced may be structural proteins such as collagen in the skin, enzymes, or hormones such as insulin that regulate cellular processes. These proteins may function within the cell or be secreted from the cell to be used elsewhere in the body.

Our protein molecules are subject to damage, and some cellular proteins, especially regulatory proteins, may be needed just for a very short time. All such proteins must be destroyed, and this is the function of proteasomes. A proteasome is a barrel-shaped organelle made of enzymes that cut protein molecules apart (protease enzymes). Proteins that are to be des-troyed, that is, those no longer needed or those that are damaged or misfolded, are tagged by a protein called ubiquitin (sort of a cellular mop or broom) and carried into a proteasome. The protein is snipped into peptides or amino acids, which may be used again for protein synthesis on ribosomes. Proteasomes are particularly important during cell division and during embryonic development, when great changes are tak-ing place very rapidly as cells become specialized.

Many of our cells have secretory functions, that is, they produce specific products to be used elsewhere in tissues. Secretion is one task of the Golgi apparatus, a series of flat, membranous sacs, somewhat like a stack of saucers. Carbohydrates are synthesized within the Golgi apparatus, and are packaged, along with other materials, for secretion from the cell. Proteins from the ribosomes or lipids from the smooth endoplasmic reticulum may also be secreted in this way. To secrete a substance, small sacs of the Golgi membrane break off and fuse with the cell membrane, releasing the substance to the exterior of the cell. This is exocytosis, exomeaning “to go out” of the cell.

Mitochondria are oval or spherical organelles bounded by a double membrane. The inner mem-brane has folds called cristae. Within the mitochon-dria, the aerobic (oxygen-requiring) reactions of cell respiration take place. Therefore, mitochondria are the site of ATP (and hence energy) production. Cells that require large amounts of ATP, such as muscle cells, have many mitochondria to meet their need for energy. Mitochondria contain their own genes in a single DNA molecule and duplicate themselves when a cell divides. An individual’s mitochondrial DNA (mDNA) is of maternal origin, that is, from the mito-chondria that were present in the ovum, or egg cell, which was then fertilized by a sperm cell. The mito-chondria of the sperm cell usually do not enter the ovum during fertilization, because they are not found in the head of the sperm with the chromosomes (see Fig. 20–1).

Lysosomes are single-membrane structures that contain digestive enzymes. When certain white blood cells engulf bacteria, the bacteria are digested and destroyed by these lysosomal enzymes. Worn-out cell parts and dead cells are also digested by these enzymes. This is a beneficial process, and is necessary before tis-sue repair can begin. But it does have a disadvantage in that lysosomal digestion contributes to inflammation in damaged tissues. An excess of inflammation can start a vicious cycle, actually a positive feedback mech-anism, that results in extensive tissue damage.

Many of our cells are capable of dividing, or repro-ducing, themselves. Centrioles are a pair of rod-shaped structures perpendicular to one another, located just outside the nucleus. Their function is to organize the spindle fibers during cell division. The spindle fibers are contracting proteins that pull the two sets of chromosomes apart, toward the ends of the original cell as it divides into two new cells. Each new cell then has a full set of chromosomes.

Cilia and flagella are mobile thread-like projec-tions through the cell membrane; each is anchored by a basal body just within the membrane. Cilia are usu-ally shorter than flagella, and an individual cell has many of them on its free surface. The cilia of a cell beat in unison and sweep materials across the cell sur-face. Cells lining the fallopian tubes, for example, have cilia to sweep the egg cell toward the uterus. The only human cell with a flagellum is the sperm cell. The fla-gellum provides motility, or movement, for the sperm cell.

Microvilli are folds of the cell membrane on the free surface of a cell. These folds greatly increase the surface area of the membrane, and are part of the cells lining organs that absorb materials. The small intes-tine, for example, requires a large surface area for the absorption of nutrients, and many of its lining cells have microvilli. Some cells of the kidney tubules also have microvilli (see Fig. 1–1) that provide for the effi-cient reabsorption of useful materials back to the blood.

The functions of the cell organelles are summa-rized in Table 3–1. 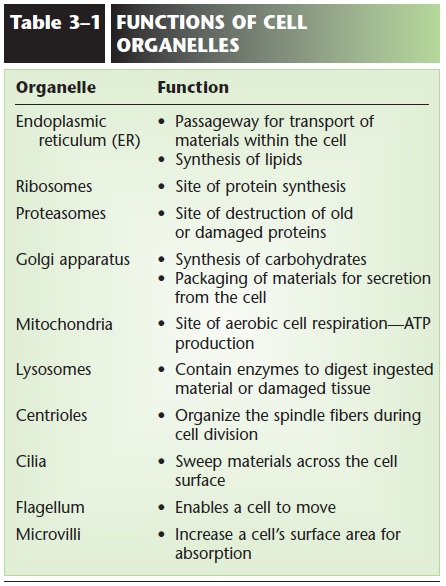