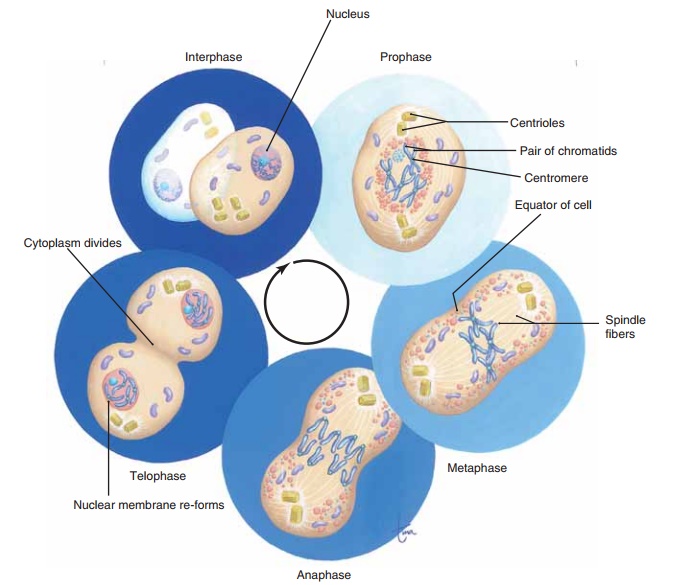 Cell division is the process by which a cell reproduces itself. There are two types of cell division, mitosis and meiosis. Although both types involve cell reproduc-tion, their purposes are very different.

Cell division is the process by which a cell reproduces itself. There are two types of cell division, mitosis and meiosis. Although both types involve cell reproduc-tion, their purposes are very different.

Each of us began life as one cell, a fertilized egg. Each of us now consists of billions of cells produced by the process of mitosis. Inmitosis, one cell with the diploid number of chromosomes (the usual number, 46 for people) divides into two identical cells, each with the diploid number of chromosomes. This pro-duction of identical cells is necessary for the growth of the organism and for repair of tissues.

Before mitosis can take place, a cell must have two complete sets of chromosomes, because each new cell must have the diploid number. The process of DNA replication enables each chromosome (in the form of chromatin) to make a copy of itself. The time during which this takes place is called interphase, the time between mitotic divisions. Although interphase is sometimes referred to as the resting stage, resting means “not dividing” rather than “inactive.” The cell is quite actively producing a second set of chromo-somes and storing energy in ATP.

The long, thin, and invisible chromatin molecules then begin to coil very precisely and extensively, and if we were looking at the nucleus of a living cell under a microscope, we would see the duplicated chromo-somes appear. Each would look somewhat like the let-ter X, because the original DNA molecule and its copy (now called chromatids) are still attached.

The stages of mitosis are prophase, metaphase, anaphase, and telophase. What happens in each of these stages is described in Table 3–4. As you read the events of each stage, refer to Fig. 3–5, which depicts mitosis in a cell with a diploid number of four. 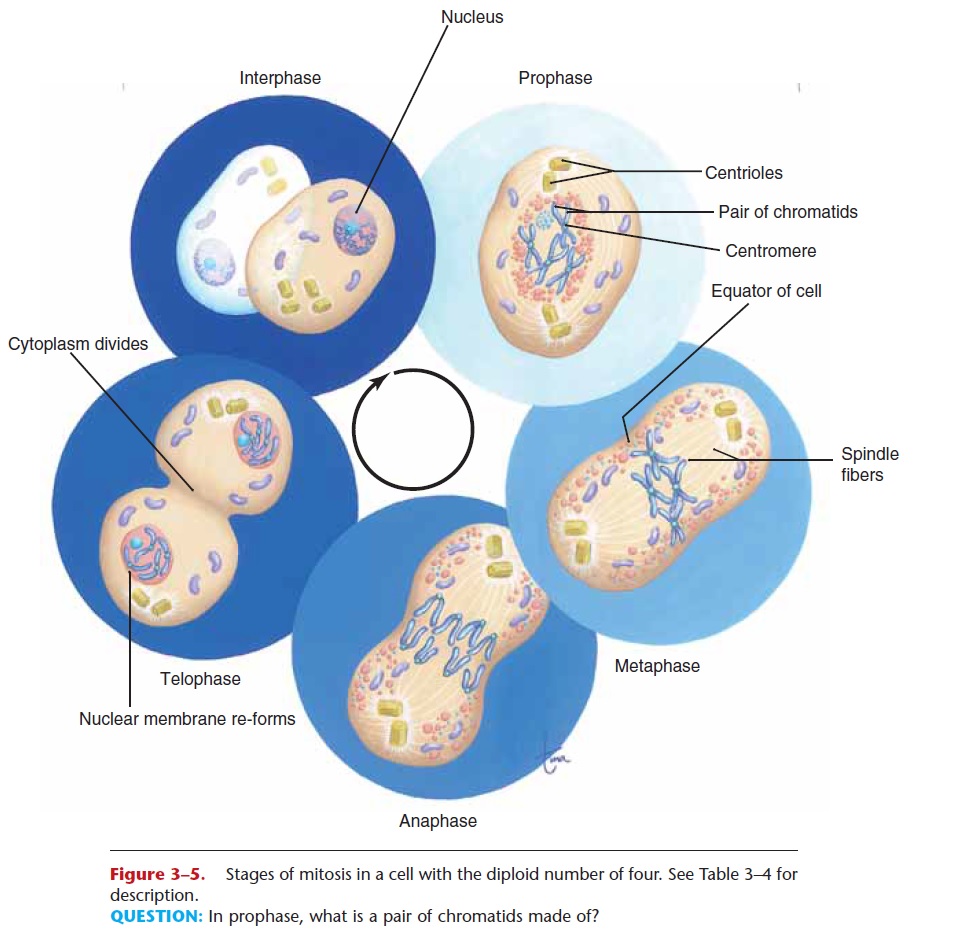 Figure 3–5. Stages of mitosis in a cell with the diploid number of four. See Table 3–4 for description.

QUESTION: In prophase, what is a pair of chromatids made of?

As mentioned previously, mitosis is essential for repair of tissues, to replace damaged or dead cells. Some examples may help illustrate this. In several areas of the body, mitosis takes place constantly. These sites include the epidermis of the skin, the stomach lining, and the red bone marrow. For each of these sites, there is a specific reason why this constant mito-sis is necessary.

What happens to the surface of the skin? The dead, outer cells are worn off by contact with the environ-ment. Mitosis of the epidermal cells in the lower liv-ing layer replaces these cells, and the epidermis maintains its normal thickness.

It is also important to be aware of the areas of the body where mitosis does not take place. In an adult, most muscle cells and neurons (nerve cells) do not reproduce themselves. If they die, their functions are also lost. Someone whose spinal cord has been severed will have paralysis and loss of sensation below the level of the injury. The spinal cord neurons do not undergo mitosis to replace the ones that were lost, and such an injury is permanent.

Skeletal muscle cells are capable of limited mitosis for repair. The heart is made of cardiac muscle cells, which, like neurons, seem to be incapable of mitosis. A heart attack (myocardial infarction) means that a por-tion of cardiac muscle dies because of lack of oxygen. These cells are not replaced, and the heart will be a less effective pump. If a large enough area of the heart muscle dies, the heart attack may be fatal.

Some research has found evidence for the potential for mitosis after damage in both the central nervous system and the heart. Such cell division may be that of neurons or muscle cells that were stimulated to divide by chemicals from the adjacent damaged tissue. Or the dividing cells may be stem cells that are among the specialized cells.

(A region of the brain called the hip-pocampus, which is necessary to form new memories, seems to have cells capable of division.) At present we do not have definitive knowledge, but we do know that for most people with heart damage or central nervous system injury, mitosis does not take place, or not suf-ficiently enough to replace the cells that have died and preserve or restore normal functioning of the organ. Research is continuing, and may eventually find the stimulus necessary to produce extended mitosis that would bring about true tissue repair.

Meiosis is a more complex process of cell division that results in the formation of gametes, which are egg and sperm cells. In meiosis, one cell with the diploid number of chromosomes divides twice to form four cells, each with the haploid number (half the usual number) of chromosomes.

The egg and sperm cells produced by meiosis have the haploid number of chromosomes, which is 23 for humans. Meiosis is sometimes called reduction divi-sion because the division process reduces the chromo-some number in the egg or sperm. Then, during fertilization, in which the egg unites with the sperm, the 23 chromosomes of the sperm plus the 23 chro-mosomes of the egg will restore the diploid number of 46 in the fertilized egg. Thus, the proper chromosome number is maintained in the cells of the new individual.