A DBMS is a complex software system. In this section we discuss the types of soft-ware components that constitute a DBMS and the types of computer system soft-ware with which the DBMS interacts.

A DBMS is a complex software system. In this section we discuss the types of soft-ware components that constitute a DBMS and the types of computer system soft-ware with which the DBMS interacts.

Figure 2.3 illustrates, in a simplified form, the typical DBMS components. The fig-ure is divided into two parts. The top part of the figure refers to the various users of the database environment and their interfaces. The lower part shows the internals of the DBMS responsible for storage of data and processing of transactions.

The database and the DBMS catalog are usually stored on disk. Access to the disk is controlled primarily by the operating system (OS), which schedules disk read/write. Many DBMSs have their own buffer management module to schedule disk read/write, because this has a considerable effect on performance. Reducing disk read/write improves performance considerably. A higher-level stored data manager module of the DBMS controls access to DBMS information that is stored on disk, whether it is part of the database or the catalog.

Let us consider the top part of Figure 2.3 first. It shows interfaces for the DBA staff, casual users who work with interactive interfaces to formulate queries, application programmers who create programs using some host programming languages, and parametric users who do data entry work by supplying parameters to predefined transactions. The DBA staff works on defining the database and tuning it by making changes to its definition using the DDL and other privileged commands.

The DDL compiler processes schema definitions, specified in the DDL, and stores descriptions of the schemas (meta-data) in the DBMS catalog. The catalog includes information such as the names and sizes of files, names and data types of data items, storage details of each file, mapping information among schemas, and constraints. In addition, the catalog stores many other types of information that are needed by the DBMS modules, which can then look up the catalog information as needed.

Casual users and persons with occasional need for information from the database interact using some form of interface, which we call the interactive query interface in Figure 2.3. We have not explicitly shown any menu-based or form-based interac-tion that may be used to generate the interactive query automatically. These queries are parsed and validated for correctness of the query syntax, the names of files and 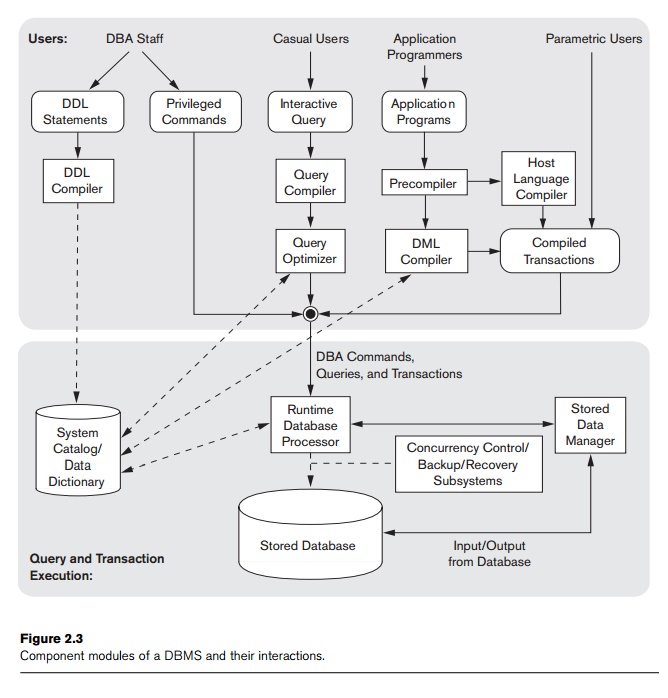 data elements, and so on by a query compiler that compiles them into an internal form. This internal query is subjected to query optimization (discussed in Chapters 19 and 20). Among other things, the query optimizer is concerned with the rearrangement and possible reordering of operations, elimination of redundancies, and use of correct algorithms and indexes during execution. It consults the system catalog for statistical and other physical information about the stored data and generates executable code that performs the necessary operations for the query and makes calls on the runtime processor.

Application programmers write programs in host languages such as Java, C, or C++ that are submitted to a precompiler. The precompiler extracts DML commands from an application program written in a host programming language. These commands are sent to the DML compiler for compilation into object code for database access. The rest of the program is sent to the host language compiler. The object codes for the DML commands and the rest of the program are linked, forming a canned transaction whose executable code includes calls to the runtime database processor. Canned transactions are executed repeatedly by parametric users, who simply supply the parameters to the transactions. Each execution is considered to be a separate transaction. An example is a bank withdrawal transaction where the account number and the amount may be supplied as parameters.

In the lower part of Figure 2.3, the runtime database processor executes (1) the privileged commands, (2) the executable query plans, and (3) the canned transactions with runtime parameters. It works with the system catalog and may update it with statistics. It also works with the stored data manager, which in turn uses basic operating system services for carrying out low-level input/output (read/write) operations between the disk and main memory. The runtime database processor handles other aspects of data transfer, such as management of buffers in the main memory. Some DBMSs have their own buffer management module while others depend on the OS for buffer management. We have shown concurrency control and backup and recovery systems separately as a module in this figure. They are integrated into the working of the runtime database processor for purposes of transaction management.

Figure 2.3 is not meant to describe a specific DBMS; rather, it illustrates typical DBMS modules. The DBMS interacts with the operating system when disk accesses—to the database or to the catalog—are needed. If the computer system is shared by many users, the OS will schedule DBMS disk access requests and DBMS processing along with other processes. On the other hand, if the computer system is mainly dedicated to running the database server, the DBMS will control main memory buffering of disk pages. The DBMS also interfaces with compilers for general-purpose host programming languages, and with application servers and client programs running on separate machines through the system network interface.

In addition to possessing the software modules just described, most DBMSs have database utilities that help the DBA manage the database system. Common utilities have the following types of functions:

Loading. A loading utility is used to load existing data files—such as text files or sequential files—into the database. Usually, the current (source) for mat of the data file and the desired (target) database file structure are specified to the utility, which then automatically reformats the data and stores it in the database. With the proliferation of DBMSs, transferring data from one DBMS to another is becoming common in many organizations. Some vendors are offering products that generate the appropriate loading programs, given the existing source and target database storage descriptions (internal schemas). Such tools are also called conversion tools. For the hierarchical DBMS called IMS (IBM) and for many network DBMSs including IDMS (Computer Associates), SUPRA (Cincom), and IMAGE (HP), the vendors or third-party companies are making a variety of conversion tools available (e.g., Cincom’s SUPRA Server SQL) to transform data into the relational model.

Database storage reorganization. This utility can be used to reorganize a set of database files into different file organizations, and create new access paths to improve performance.

Performance monitoring. Such a utility monitors database usage and provides statistics to the DBA. The DBA uses the statistics in making decisions such as whether or not to reorganize files or whether to add or drop indexes to improve performance.

Other utilities may be available for sorting files, handling data compression, monitoring access by users, interfacing with the network, and performing other functions.

Other tools are often available to database designers, users, and the DBMS. CASE tools are used in the design phase of database systems. Another tool that can be quite useful in large organizations is an expanded data dictionary (or data repository) system. In addition to storing catalog information about schemas and constraints, the data dictionary stores other information, such as design decisions, usage standards, application program descriptions, and user information. Such a system is also called an information repository. This information can be accessed directly by users or the DBA when needed. A data dictionary utility is similar to the DBMS catalog, but it includes a wider variety of information and is accessed mainly by users rather than by the DBMS software.

Application development environments, such as PowerBuilder (Sybase) or JBuilder (Borland), have been quite popular. These systems provide an environment for developing database applications and include facilities that help in many facets of database systems, including database design, GUI development, querying and updating, and application program development.

The DBMS also needs to interface with communications software, whose function is to allow users at locations remote from the database system site to access the data-base through computer terminals, workstations, or personal computers. These are connected to the database site through data communications hardware such as Internet routers, phone lines, long-haul networks, local networks, or satellite communication devices. Many commercial database systems have communication packages that work with the DBMS. The integrated DBMS and data communications system is called a DB/DC system. In addition, some distributed DBMSs are physically distributed over multiple machines. In this case, communications net-works are needed to connect the machines. These are often local area networks (LANs), but they can also be other types of networks.